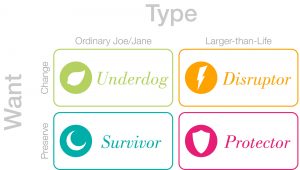 Now you are ready to determine your protagonist’s archetype. Every writer has a particular character archetype that he or she is especially good at writing. This is your “storytelling superpower,” and it’s important to know what it is so you can play to your strengths.

When you write a character that aligns with your superpower, the story flows more naturally because it taps into your own core beliefs and attitudes. In fact, you likely gravitate toward one archetype over the others because it resonates with you and feels more familiar. Of course, you can always craft a convincing character that does not share your superpower archetype, but when you know where your own strengths lie, you can learn to harness them even when you are writing a character that is outside your creative comfort zone. (Note: To discover your storytelling superpower, you can take the quiz at DIYMFA.com/STSP.)

To see how the storytelling superpower works, first you need to understand the four archetypes, which come from intersecting the protagonist’s type (ordinary Joe/Jane vs. larger-than-life hero) with what that character wants (change vs. preservation), as shown in Image 1. The underdog is an ordinary Joe/Jane character who wants to change something in himself or the world around him. The disruptor also wants to create change and is a larger-than-life type. Similarly, the survivor is an everyman who seeks to preserve something, while the protector is the heroic version of a character with this same desire. Let’s look more closely at each of these types.

The underdog is a seemingly “normal” character who wants to create change in himself, his situation, or the world. This archetype is especially compelling and relatable because readers see themselves in him. When an underdog saves the day by doing something remarkable, readers think, “Maybe I can do that, too.” Classic underdogs include Katniss Everdeen, Harry Potter (at the beginning of the series), and Marty McFly from Back to the Future.

At their best, underdogs are scrappy, determined, and focused on their goals. They take initiative and make the best of situations even when the odds are stacked against them. At their worst, they can be hot-heads who make reckless choices and try too hard to prove naysayers wrong. Underdogs are especially compelling in rags-to-riches “Cinderella” stories or any narrative where you have a David-and-Goliath “big guy versus little guy” conflict.

Disruptors are larger-than-life, charismatic leaders. They know what they want and will do whatever it takes to get it. These characters are aspirational; readers may not see themselves in disruptors, but they want to become like them. While these protagonists do not need to have bombastic personalities to make an impression, they are not forgettable characters. Examples include Elizabeth Bennet from Pride and Prejudice, Jay Gatsby from The Great Gatsby, and Tris Prior from Divergent.

These protagonists excel in situations where they can take the lead or be in the limelight, but they are not good at taking orders or working with a team. They might even lack empathy or be downright narcissistic, especially when using their heroic abilities for their own ends. The key to making a disruptor likeable is to show vulnerability, and a great way to do that is to put the character in a situation where his exceptional skills are moot. Signature disruptor stories are epic quests, battles against the establishment, or “switching places” narratives where the character is thrown into circumstances where he is no longer all-powerful.

True to the name, a survivor will do whatever it takes to survive. Whether she is stranded on a desert island, captured by an evil genius, or fighting a terminal illness, this character’s strength is her determination to hold fast. Whatever the odds, this protagonist never gives up. Like they do with the underdog, readers identify with survivors because they see some part of themselves reflected in these protagonists. Examples of survivor characters are Jim Lovell from Apollo 13, Hazel Grace Lancaster in The Fault in Our Stars, and Anne Elliot from Persuasion.

At their best, survivors can be the epitome of hope, but if taken to the extreme, they can become whiny or even the voice of doom and gloom. Be careful not to focus so much on the survivor’s obstacle that the character herself fades to the background. Remember, too, that while survivor stories can tug at the heartstrings, if pushed too far, those emotions can feel manipulative. Both the character’s struggle and the emotion must serve your story, not the other way around.

Protectors are superheroes, even if they don’t wear spandex and capes, and their goal is to defend the world and those they love in it. While disruptors want to challenge the establishment, protectors focus on preserving the status quo and stopping any evil that threatens the people or principles they hold dear. These characters are powerful and loyal, and classic examples include comic book superheroes like Superman or Batman, James Bond, or Dwight Schrute from the television show The Office.

The pitfall with protectors is when they become too powerful, so make sure you show a chink in the armor. Readers like to root for the “good guy” who saves the day – especially when that character is protecting others. Just make sure he doesn’t seem too perfect and infallible.

Step 4: Send the character on a journey

Once you know your character’s archetype, the natural next step is to send that character on a journey, preferably one rife with conflict. Use the strengths – and weaknesses – of that archetype to build tension for your protagonist. Think of it as constantly creating a worst-case scenario. Whenever things become too comfortable for your character, ask yourself: “How can I make things worse?” Then do it. The acronym WORST will remind you how to build tension in your story.

W= What does the character want?
O= What obstacles stand in her way?
R= What is she willing to risk in order to reach that goal?
S= What’s at stake if she doesn’t get it?
T= How does the character transform over the course of this journey?

The protagonist’s desire is what sets the story in motion, and the transformation in pursuit of that goal ties it all together at the end, but it’s the obstacles, risks, and stakes that carry the story and sustain momentum. The dreaded “muddle in the middle” is where writers get stuck, but if you use the WORST acronym you can avoid this pitfall. Not sure what to do next? Throw another obstacle between your character and her goal. Is your protagonist willing to risk something huge to get what he wants? Let him do it, then make it go terribly wrong. No one wants to read about happy characters living happy lives, so whenever your story stalls, think of a way to make things worse for your protagonist.

How should I best prioritize my story ideas when I have multiple ones floating around in my brain?

Advertisement Determine your topic focus As I said at the beginning of this article, “novel writing” is too broad a topic for a workshop. You … END_OF_DOCUMENT_TOKEN_TO_BE_REPLACED

Authors share their best tips on finding the ideal protagonist for your story.