Step 5: Bring your character to life

Now it’s time to make your character come to life on the page, and there are four main components you should consider: thoughts, actions, dialogue, and appearance.

Thoughts include anything the protagonist might think or feel.

Actions comprise both things your character does and things he chooses not to do.

Dialogue is any conversation your character has with someone else.

Appearance includes any description of how he looks or seems to an outside observer.

Writers often rely on some of these elements more than others, using them as a crutch to compensate for areas where their writing might not be as strong. This is where a “character compass” can help. This technique can show you if you’re omitting or overusing any element for a long stretch in your story.

To create a character compass, draw a circle and bisect it vertically and horizontally, as though you are drawing crosshairs. Label each of the axes as shown in Image 2. Choose one scene in your story, read through it, and mark each axis with a dot depending on how much of that element you use in that passage. The more you use a component, the closer to the edge of the circle you should place the dot. Once you have marked all four axes, connect the dots and fill in the resulting shape.

This diagram shows what the compass would look like for a scene where the protagonist is alone, having a pensive moment. Such a scene will be heavy on thought but have minimal action and appearance, and virtually no dialogue. To get a sense of whether you are overusing – or omitting – one of the four components, do this same exercise over several scenes. Remember that in any given scene you do not need to have a perfectly symmetrical shape for your compass, but if you notice one element dominates or is missing throughout a long section, it may be a sign that you need to rework that passage. The character compass is a diagnostic tool that gives you a visual representation of what you are doing on the page so you can be more versatile in how you depict your characters.

Now that you have a strong grasp on your protagonist, it’s time to shift your attention to the supporting cast. Notice that I don’t call them “secondary” characters or “side” characters. This is because your supporting cast shouldn’t be a mere afterthought. These characters have an important job: to support the development of your main character. They exist to increase the tension or present obstacles for your protagonist, to raise the stakes of her struggle and add new layers of complexity to the conflict she faces. Think of that WORST acronym as you craft your supporting cast, and ask yourself: “How can this character create a worst-case scenario for my main character?”

While there are many different supporting characters, five archetypes appear most often: the villain, the love interest, the BFF or sidekick, the mentor, and the fool. Not all of these will appear in every story, and in some cases the same character might represent more than one of these archetypes. It is important to understand these types because each one contributes to the protagonist’s journey in a different way.

The villain’s role is perhaps the most obvious, since he is either the primary antagonist the protagonist must face, or he makes another obstacle even worse. Keep in mind that not every story has a villain as the main antagonist. In some stories, the main antagonist might be a natural disaster (e.g., The Perfect Storm by Sebastian Junger) or dinosaurs looking for their next meal (e.g., Michael Crichton’s Jurassic Park), but even in those cases we often have at least one character – an “everyday villain” – who contributes to the conflict caused by that larger antagonist. Whether you are dealing with a supervillain who is the source of all conflict or an everyday villain who makes another antagonist worse, this character’s job is to create obstacles for your protagonist and prevent him from getting what he wants.

In most genres, the love interest appears as part of a subplot and serves to escalate the central conflict. Unless you are writing a pure romance, finding love is usually not protagonist’s main goal. Often, the love interest comes into the story to raise the stakes or becomes an obstacle between the protagonist and her goal. For instance, the romance between Katniss and Peeta in the Hunger Games trilogy creates complications because only one tribute can survive the games. As the series progresses, the Capitol uses Peeta as a pawn to manipulate Katniss as she leads the revolution.

While the love interest might create problems for the protagonist, the BFF (best friend forever) is there to complement her strengths and provide qualities she might lack. Consider Hermione and Ron in the Harry Potter series. While Harry might be the courageous leader, Hermione has the brains, and Ron serves as comic relief when Harry gets into his gloomy moods. Notice also that BFFs often occur in pairs, leading to a friendship triangle and creating more opportunity for conflict. When the friends inevitably disagree, the dynamic shifts into two against one, leaving one character – often the protagonist – to hold his own against the others. In the Harry Potter series, this dynamic shifts constantly throughout the seven books.

The mentor is an important archetype, but it’s also one that writers misuse the most. It’s tempting to make this character too perfect and all-knowing, especially since her role is to offer guidance, but the archetype works best when the advisor has both flaws that harm and knowledge that helps the protagonist. Be careful also not to make the moments where the mentor imparts nuggets of wisdom too convenient, or it will feel formulaic to your readers. If the mentor intervenes every time there is a question or struggle, it will seem as though the protagonist has no agency in the story. Hold back on those mentoring moments and let the main character figure some things out for himself.

The fool is perhaps the oldest supporting character archetype, going back to Shakespeare (e.g. the Fool in King Lear and Feste in Twelfth Night) or the chorus in the plays of ancient Greece. We also see this archetype in contemporary work, with Haymitch of the Hunger Games trilogy as a perfect example. The fool’s job is simple: to tell the main character what she needs to know but does not want to hear. The fool exists to challenge the protagonist’s belief system and nudge – sometimes even shove – her in the right direction, though she often does not heed the fool’s words until it is too late.

Remember that the supporting cast exists to support the protagonist’s journey. As you develop these characters, look at how you can use them to create obstacles for the main character or raise the stakes of the story. 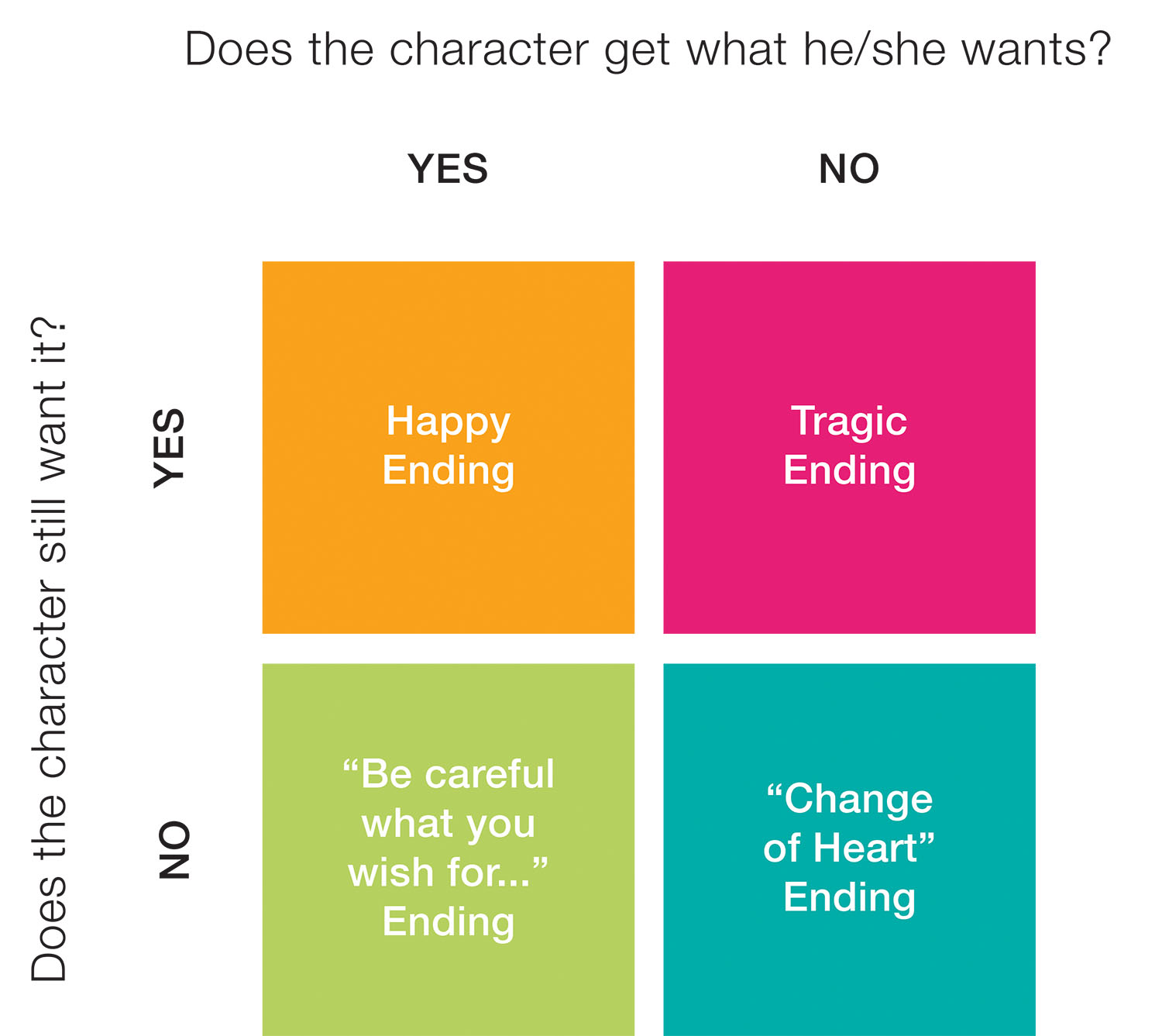 At last we reach the climax, the grand finale of your story. By now, you have established your protagonist’s deepest desires and motivations, fleshed out your character’s journey, and introduced a supporting cast. Now all you need to do is tie it all together. While it might seem that there are infinite ways to resolve your story, there are only four possible endings. These depend on whether the protagonist gets what he wants, and whether he still wants it.

If, at the climax, your protagonist is still pursuing that same desire he had at the beginning, then there are only two possible ways for the story to end: either he gets what he wants or he doesn’t (i.e. a happy or tragic ending, respectively). On the other hand, if, over the course of the story, your character’s desire has changed, then the ending will need to adjust accordingly. For instance, the protagonist might not reach her original goal, but that’s OK because it’s not really what she wanted anyway. This is the “change of heart” ending, because somewhere along the way the main character realizes that her true desire is not the thing she is chasing, so she shifts her attention to a new goal.

The opposite scenario is when a character does get what he wants, but it turns out not to be what he expected. In this case, the protagonist’s desire changes, but the outcome of his quest does not. I call this the “be careful what you wish for” ending, and we are more likely to see it in short stories and novellas than in full-length novels. Since novels have a larger scope, this be-careful-what-you-wish-for moment usually occurs in the middle, where the character realizes that he doesn’t want that original thing and changes course. In more compressed pieces like short fiction or fables, however, we may see this realization at the end of the story, where the protagonist gets what he wants but decides he does not want it anymore.

As you can see, both character and plot must intertwine to create a compelling story. Character is your novel’s heart and soul, and while some plot events may be outside your protagonist’s control, the story derives from what your character wants and the choices she makes in pursuit of that goal.

Gabriela Pereira is the instigator of DIY MFA and author of DIY MFA. Discover your storytelling superpower by going to DIYMFA.com/STSP and taking the quiz.

How should I best prioritize my story ideas when I have multiple ones floating around in my brain?

Advertisement Preparation Any equipment needs you might have, such as a laptop and a projector so you can display images from your computer on a … END_OF_DOCUMENT_TOKEN_TO_BE_REPLACED

Authors share their best tips on finding the ideal protagonist for your story.