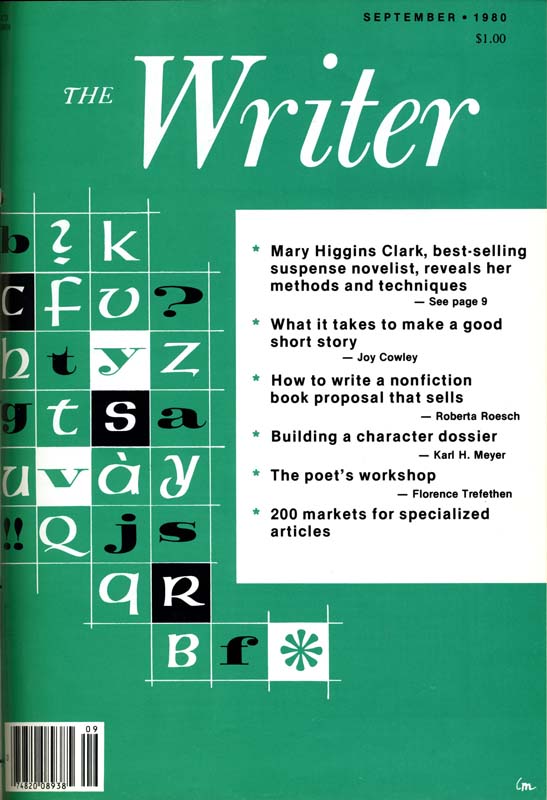 You could say she knows a thing or two about writing. But in her September 1980 article for The Writer, she admits, “Telling someone how to turn out a marketable suspense novel is rather like dancing with an octopus. Which hand (or tentacle) do you reach for first?”

With wit and wisdom, Clark explores the delicate writing dance in five parts.

Plot is the foundation of a good story. It must be organic, without coincidence or convoluted explanations.

When looking for new plot ideas, Clark combs the news. She suggests that writers create a file on a particular news item or case and “use that case as a nucleus for your story.” Pull ingredients from reality, then mix them into a fresh plot.

Physical environment and the use of time directly influence a story’s atmosphere. Clark’s suspense stories come to life in gloomy, dark environments such as Cape Cod in the off season or the bowels of a city’s train station. Similarly, a “ticking time bomb” – a specific deadline when an adverse event will occur – increases readers’ suspense and their investment in the victim’s welfare. Swift action augments a story’s shock value.

“Suspense by its very nature suggests an express train or a roller coaster,” Clark says. “Once on board, you cannot get off until the ride ends. I am committed to the belief that this kind of speedy action is essential to good suspense writing.”

Writers must know their characters inside and out. Prior to beginning a story, consider writing biographies of the characters that detail their histories, appearances and personalities.

“Think of someone you know or knew as a child who reminds you of the character you’re trying to create,” Clark says. Then use that person’s mannerisms and expressions as a basis for fiction.

Clark avoids the anti-hero and instead writes about “very nice people who are confronted by the forces of evil and who through their own courage and intelligence work their way through to deliverance.” The novelist also avoids making villains attractive and instead amplifies their more menacing details.

A suspense novel should feature a variety of characters the reader can identify with. Minor characters can also play important roles when used to move the story forward.

Research before writing and continue the research process as you write. Clark’s research often includes reading hundreds of articles and interviewing specialists such as doctors, lawyers or law officers. Sometimes she will also have a specialist read the completed manuscript to verify facts.

“Authenticity of detail gives the ring of truth to a book,” she says.

Perhaps the most important point to remember: Don’t spend months perfecting Chapter One. Plow forward with a project and build momentum through the writing process.

“Get it down,” Clark says. “Bumble through it. Tell the story. Then when you have 50 or 100 pages typed, you’ve got something to work with.”