How do you improve your writing chops to get editors, publishers, and readers to pay attention? You now know what you want to concentrate on, but how do you put this into action? The answer: Understand exactly what it takes and follow through. Stick to it. If it’s something that will vastly improve your writing, it’s worth attending to. Consider the five writerly priorities we touched on. How did these key strategies influence the pros’ fiction writing?

According to Johns, the emotion of yearning in her story “This is Why We Can’t Have Nice Things” (StoryQuarterly vol. 42, Feb. 2015) happens early in the story, just where it should occur. Note this passage:

Under the murmurs of the other customers in the diner [Kathleen] can hear the sound of china and silverware clinking together, a sound that puts her in mind of their old apartment in Manhattan, where Luc used to make breakfast for the family on Sunday mornings; she’d awaken to find him setting the table in the dining room, the coffee already in the press, and Luc would brush his powdered-sugar lips across the back of her neck and tell her to have a seat, mon ange, I will take care of everything. Those mornings – she should have stored them up, hoarded them against an uncertain future. How was she supposed to know that happiness was a boat that had already slipped its moorings?

What happens here, says Johns, is a rendering of Kathleen’s deep sense of loss over “the safe, contented family life she took for granted before the death of her husband.” The yearning is thus implied instead of explicitly stated. From this start, the story evolves as Kathleen attempts to regain her “sense of safety and security,” relocating, after September 11, with her son back home to Pennsylvania. Johns adds, “Since this story is also an excerpt of my novel-in-progress, I can tell you that this question of a safe family is one that hangs over the entire story.” In establishing it early on and threading it throughout the narrative, Johns hooks us to read on, and we are able to arrive at what she has called “an epiphany of yearning.”

The right lens or vantage point was crucial, Rader-Day believes, in writing her novel Under a Dark Sky. Consider the following excerpt:

I had a feeling of the sky’s vastness. . . . My tiny understanding of it rested upon my skin until without warning, the wide abyss sank in and then stretched out from me in all directions. The creeping loneliness I had been keeping at bay rose up in my throat, a choking panic.

The character here is Eden Wallace, who, says Rader-Day, “is standing in broad daylight having a panic attack in the middle of a group of strangers she’s just met.” First person pulls us in, as it often does, because of its immediacy. But lens is a different matter. It has to do with the right character as narrative center – and yet the matter can become more complex than this, as Rader-Day explains: “These lines show how the wide lens shrinks quickly into Eden’s interior point of view and then just as quickly turns physical, so that the reader (hopefully) experiences how Eden’s phobias rage inside her own body.” The point here? One POV character doesn’t necessarily mean one lens. It can mean multiple lenses, and here the vantage point of deep interiority is necessary to telling her story: “Eden makes a lot of bad decisions in the course of the story, so it’s important for the reader to understand that, inside, she’s swirling with phobias and lack of sleep. She’s not a reliable narrator, but she’s what we have.” The lesson here? Be aware of point of view as more than choice of person. Tap your stories and novels for the rich possibilities inherent in character perspective. Will there be just one, or several? The more nuanced and complex, the more life-like – and hence, the more interesting.

Tracey went for so-called “Method Writing” in his crime novel A Fourth Face. This novel is about a former hockey player, Bobby Ehle, who just might have murdered his ex-wife. He’s just not sure, so he hires detective Hayden Fuller to find out. Note how one short scene comes down, written from Hayden’s point of view:

Bobby’s shoulders suddenly shook. Nancy’s death eyes, man, were shiny coins. Bright and much bigger than they should have been. He absently touched one of the tines on his cheek.

“I don’t know if I can take these headaches much longer. Sometimes I figure—”

I handed him a glass of water.

I bit my lower lip.

Tracey explains how this stripped-down scene works to meet his actorly approach. By emphasizing his vulnerability, Bobby’s trying to “elicit sympathy from Hayden,” says Tracey. Note, then, Hayden’s reaction – how he comes up short when he hands him a glass of water. That’s the first beat, says Tracey, a pause that “builds suspense.” Now an outburst from Bobby: “I loved her.” Hayden’s reaction yields two more beats: “I bit my lower lip” and “Blades whirred,” referring, says Tracey, “to the rattling ceiling fan and a helicopter stuttering in his backyard.”

When Tracey approaches a piece of fiction, he thinks of getting into the heads of his characters. He thinks like an actor: it’s of central importance to him to gain the necessary empathy, to become that character. And he works in the necessary beats, the kind that substitute for words. Words and actions – that’s what we depend on in a play. When Tracey writes fiction, he thinks like a playwright.

Listen to this prose from the opening of her novel Arrowood:

I used to play a game where I imagined that someone had abandoned me in a strange, unknown place and I had to find my way back home. There were various scenarios, but I was always incapacitated in some way—tied up, mute, missing a limb. I thought that I could do it blind, the same way a lost dog might trek a thousand miles to return to its owner, relying on some mysterious instinct that drew the heart back where it belonged.

What we have here is the revised, finely tuned draft. What was that process like for McHugh? Troublesome, she says. Full of false starts. As she puts it, “In the early stages of writing my second novel [Arrowood], I spent a great deal of time trying to figure out the right opening lines—something to do with the main character returning to her childhood home nearly 20 years after witnessing the abduction of her sisters from their front yard. I was wasting time needlessly and not getting anywhere.” And so, she revised her way of thinking: Get that first draft down before fiddling with it. “I made a note to come back to it later, the placeholder allowing me to move forward and complete the draft without a perfect beginning. I didn’t write the final version of the opening until I had completed the first draft of the novel and knew the entire story, including the end.” Not that this is an easy, ready-made process where everything conveniently falls into place, says McHugh: “I still get stuck at times, reverting to ineffective writing habits, and have to remind myself of the importance of powering through the draft.”

“The novel of mine that I outlined most in advance of rough-drafting,” says Wisniewski, “was the one I wrote before I ever attended an MFA program, where I was taught that outlining and plot creation were not as important as, for example, polishing one’s lyrical prose.” This novel was Confessions of a Polish Used Car Salesman, which, he says, went into “a second printing within a month despite the fact that a virtually unknown small press published it” – and despite the fact that, back then, in 1997, he did not have an impressive bio. Wisniewski attributes this to Confessions’ compelling plot, including “the ironic plot-twist at the end – when the protagonist pulled off the largest used car scam ever by selling an entire lot of worthless cars to a con artist who had been the most ruthless used car salesman ever.” This novel made a much bigger splash than his commercially published Watch Me Go, despite the lavish praise for the latter “by Salman Rushdie and other luminaries.”

Find your goal and start moving toward it

To make your fiction stronger, here’s a recommendation: Think of one key thing to focus on. Maybe the importance of character yearning. Maybe high-octane scenes. Maybe a plot that sizzles. Or maybe it’s a process that will get you where you want to go with fewer false starts. Try each of these in any order you want. Voila! If you spend real time thinking critically about bettering your writing, you can’t help but see improvement.

Jack Smith is the author of four novels, three books of nonfiction, and numerous articles and interviews. His collection of articles on fiction writing, Inventing the World, was recently published by Serving House Books. 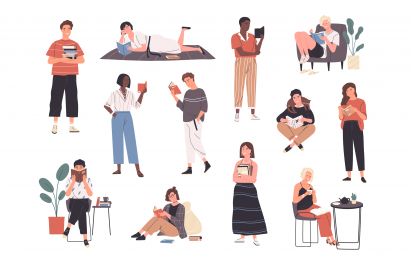 How to open a line of credit with your reader.