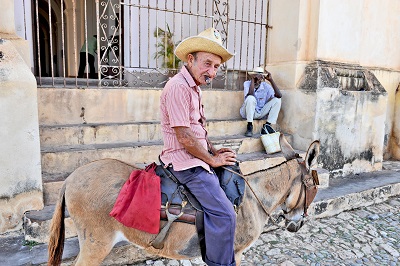 At a science fiction convention some years ago, a famous writer (to remain nameless) was giving a talk about creating a character. “You must make the character come to life from the very first word,” he opined.

From the audience, a second famous writer called out: “Marley was dead: to begin with” – the opening line of Dickens’ A Christmas Carol. Much hilarity ensued.

But the advice is good. Your character should come to life the moment he or she emerges from the wings. Even the merest secondary characters deserve a recognizable presence. This serves, to borrow from W. S. Gilbert, to “give artistic verisimilitude to the otherwise bald and unconvincing narrative.”

Just as the world you create in your story must become a real world for the reader, its characters must be real people. But the real world assaults the senses every moment with hundreds of sights, smells and sounds, and real people display dozens of little details of appearance, dress, carriage and attitude. If asked, you could tell more about any random passerby than you realize.

We fictioneers must carefully select a few details from these many possibilities so the reader’s imagination will fill in the rest. I suggest picking these details from the three categories of milieu, mannerisms and motivation (because I like the alliteration).

MILIEU Where the character comes from; his or her background, ethnicity and recent past. This can be shown by dress, speech or physical appearance (avoiding any racial stereotypes). As Robert Heinlein observed, all clothing is costume worn to let the character better fit in to his or her part. If the dress is a uniform, so much the easier. We already know something of the background of a soldier, a cop or a priest.

MANNERISMS Behavior, appearance and any little quirks that distinguish a character from everybody else. These are sometimes called “funny hats” in the trade and can be as common as scratching an ear or as original as carrying around a snare drum to beat on every time he or she tells a bad pun.

MOTIVATION What is the character doing there now, and why? You introduce a character to do something for the plot, to pass on a needed bit of information perhaps or to drive the hero to the airport. But what’s the reason for being there? If we meet the character doing his or her job – driving a taxi, teaching school, investigating a crime scene – enough said. But if not, tell us why he or she happens to be there. “My class in prehuman religion is right down the hall, so I thought I’d pop in and – ”

Your main characters won’t present a problem. Since the story is about them, all will be revealed as the story unfolds. With minor characters, enough information to set them in place can be established in a sentence or two, increasing the richness of the backdrop your heroes and/or villains are wandering through.

For instance, let’s say a man is entering a police station to report a murder. Set the station in Queens, New York, and make the man an Irish priest from a small parish in the area and we have an image, the three Ms all established.

“498 Seventh Avenue, driver,” I said, sliding into the back seat of the cab. “As fast as you can manage!”

The cabby, a skinny guy with a prominent nose and a walrus mustache, took his flat cap off and scratched a corner of his fringe of hair. “Waddya say I go tru da park,” he said. “In at 72nd out at 7th and straight down?”

“Udderwise, if we go down Fifth, we’ll hit all da crosstown traffic furder down,” he explained.

His motivation is clear, to get his passenger downtown, and he’s clearly an experienced driver who knows the best way. His milieu and mannerisms come through in his actions and dialogue (which I pushed a little to make the point). Incidentally, consider what image would be created – and how I’d have to change the dialogue – if he wore a different hat: give him a fez, say, or a bucket hat, or a turban.

And I think his brief appearance in the story creates an aura that spreads out from him and his cab to help add color to the city beyond.

When you introduce the most minor character, a walk-on who doesn’t even get named in the credits, put some spark of life in him or her. Your story will be richer for it.

Michael Kurland is the author of more than 30 novels, many of them mysteries, and has been nominated for two Edgars and the American Book Award. His latest novel is Who Thinks Evil.

Character profile: Get to know the personalities in your pages

Alexander Maksik on character and point of view

A toolbox to build character