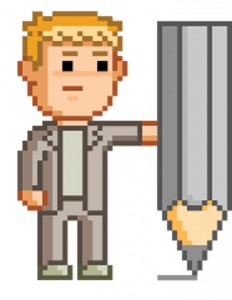 You’re scared to turn the next page. You know something terrible is going to happen – you’ve read the ominous paragraphs, the adjectives and verbs and nouns lining up like sheep heading to slaughter. It’s a familiar feeling for readers: being a powerless observer as a beloved protagonist meets their end.

In nearly all media, the author is the one in control, steering the narrative toward its inevitable conclusion. Except one – video games.

Over time, video games have ballooned into a multi-billion-dollar industry. The Entertainment Software Association (ESA) claims that industry revenue was higher than ever last year, with $23.5 billion in the United States alone. As the industry becomes increasingly adult-focused – the ESA estimates the average gamer is 35 years old – publishers are turning to traditional ways of attracting audiences: with good, well-written stories.

But breaking into writing for video games is a daunting task. How do you write a story for an interactive virtual world? What kind of ideas should you pitch? And most importantly – how do you even get your foot in the door?

Jeffrey Yohalem has worked on big-budget games such as the critically acclaimed Child of Light and Assassin’s Creed: Brotherhood – the latter of which netted him a Writers Guild of America Award. He claims that breaking into the video game industry is not as simple as pitching a story.

“A game studio has limited resources. They’re not out there looking for ideas or a project,” says Yohalem. In fact, writers are rarely tasked with creating the core idea or plot in a large-scale game project. “Oftentimes, the writer’s brought in afterwards.”

He says it’s not uncommon to find the setting decided and levels already built before a writer is even consulted. “It’s like all of the actors have been hired, and you’re supposed to make a play with those actors.”

Balancing those actors can be a challenge. One of the struggles video game writers encounter is being forced to write in tandem with a creative team that could number in the hundreds. “It’s a big jigsaw puzzle,” says Yohalem. “If there’s a space in a level that could be filled up with talking, what anyone says is up to me … but when it came to what you were doing in each level, and where each level is set, I had a lot less freedom.”

In that sense, the writer does not have full creative vision over what’s happening in the game. What the characters do, and where, is often mapped out by people in other roles, such as level designers and gameplay directors. That restriction can be very difficult for someone who does not approach writing with video games in mind.

For example, most writers wouldn’t blink at writing a scene involving drinking. “But having a glass of wine spill on someone’s shirt is super expensive in a video game,” Yohalem says, because the objects, animations and effects needed to simulate a spill must be custom-made.

But for writers who feel up to the challenge, a steady paycheck awaits. While the returns increase the longer one works in the industry, Yohalem says for someone in his position, it wasn’t uncommon to make a six-figure salary. “I think you’re a lot better off [in video games] than a lot of other writers,” he laughs.

As for getting your foot in the door? It could be as easy as sending a sample. “Develop samples that show that you understand how systems and gameplay work and that show you’re a good writer,” Yohalem said.

Of course, another avenue is available to intrepid writers trying to break into the industry: going independent, or “indie.” Working on an independent game often involves a small team and more creative control. But like writing a novel without a publisher, indie games often have little up-front money and risk generating little to no revenue – if they get completed, that is. However, many independent developers find they can create more freely compared to a big-budget project.

“I want people to be focused on the moment and interacting with these characters, as opposed to thinking of them as stats or levels or a menu item towards some other goal,” explains Benjamin Rivers, the writer – and designer, developer and art director – of the sci-fi romance game Alone with You. Being independent allowed him the control to make a game that he believes goes against the norm of the industry. “[Other games] don’t just let you be there and be like, ‘Well, I don’t care what I get out of this, I just kind of want to be in the moment,’” he says.

Laura Marchand is a freelance writer and journalist based in Montreal, Quebec.