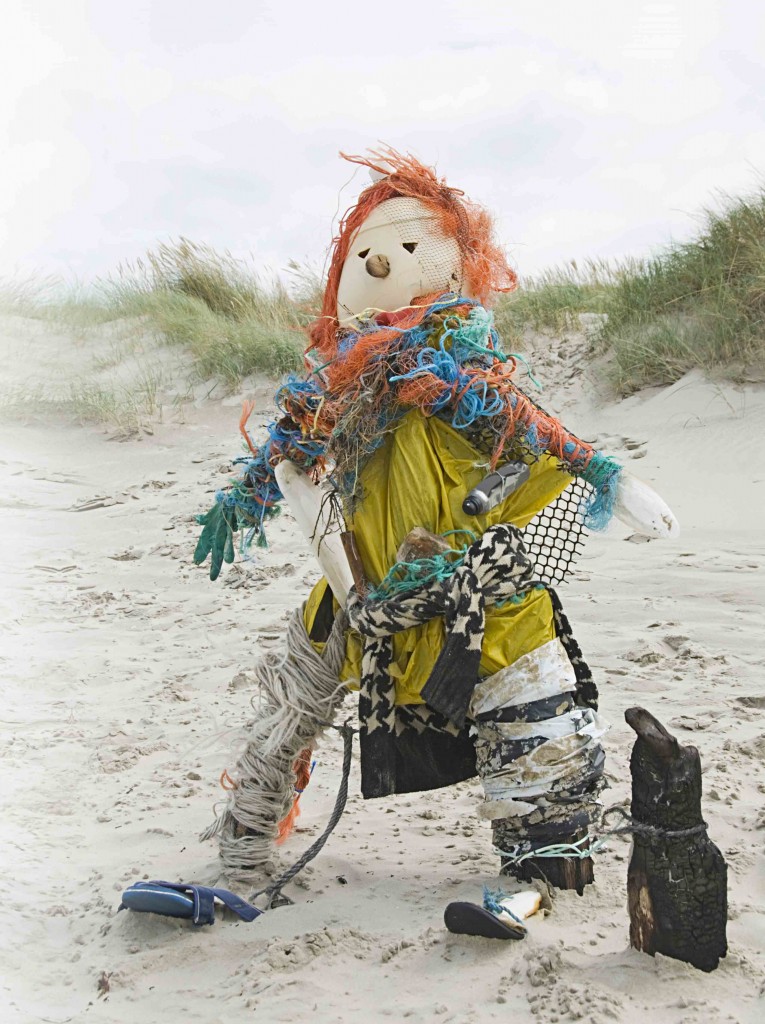 The trailer for David Gessner’s My Green Manifesto begins with the author emerging bare-chested and grunting from a swamp. In one hand, he brandishes a copy of the book that charts his journey down Boston’s Charles River with an environmental planner responsible for cleaning up the area. Cut to another shot of Professor Gessner in a suit coat and spectacles, bare legs striped with mud, reclining on a chair in the swamp to read an excerpt.

“This is my wildness,” he says. “A trashy ditch with a hooker boot for flora. Maybe that’s a good thing. Sometimes I don’t think people value wildness because they believe they have to hike to the top of a mountain in Alaska to find it.”

In the midst of solemn rumination and grim reportage on climate change, deforestation, species extinction and the like, some environmental writers have rejected traditionally bleak tones in favor of a more humorous approach. Gessner tells a wry tale about a tourist coveting a particularly impressive tarball on a beach after the BP oil spill. Brian Doyle notes that a newt peeing on a child in the forest helps nurture a lifetime of protecting the environment. Ana Maria Spagna describes the affectionate despair she feels for resident bears that leave sloppy scat on which she accidentally slips.

Michelle Nijhuis, a contributing editor at High Country News responsible for selecting many of the essays that appear there, admires those who move beyond what she describes as the “slightly sanctimonious observations of the natural world” often found in traditional nature writing.

“There’s an honesty,” she says, “that’s really refreshing when people talk about the reality of being in the natural world, and they’re lost, and they’re muddy. They may be having a spiritual relationship with nature, but it’s not pretty. We laugh in recognition.” 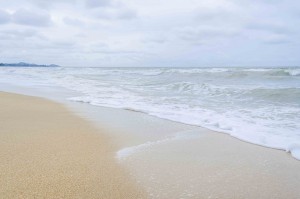 Gessner believes that while writers such as Edward Abbey and Annie Dillard have approached the genre with wit, too many environmental pieces show a dearth of humor and an overabundance of earnestness.

“You can’t say the same thing again and again without become inured to it,” he explains. “What’s happening is awful and sad, and strange and funny, too. You don’t want to have that solemn Sunday school prophet voice that admonishes you and tells you all your sins ‒ you want the whole range of emotions.”

After the BP oil spill of 2010, Gessner spent weeks in the Gulf of Mexico interviewing oil workers and fishermen, tourists, conservatives and liberals. The result is The Tarball Chronicles: A Journey Beyond the Oiled Pelican and into the Heart of the Gulf Oil Spill. The tone underscores his point.

I stare out at the river and I am happy, stupidly happy. We are on the brink of one of the most divisive and acrimonious elections in our history – so what’s new? – but for the moment that particular peep show, that carnival of charlatans, doesn’t matter. Neither does the fact that oil is still washing up on shore or that the gills of the shrimp here are black.
No, what matters right now is the roseate spoonbill which flies overhead, its feathers almost exactly the same pink as the gaudy line of light below the blue clouds.

Gessner describes himself as an artist who shows what is, with minimal moralizing. “I’m not going to just tsk-tsk,” he says. “I want to describe a situation in its weirdness – Halliburton and the beauty of the birds and the BP people and the Alice in Wonderland aspect of it all. Humor is the new frontier in this world.”

Ana Maria Spagna finds her approach to environmental writing influenced by the frontier of her own backyard. One of approximately 75 residents of Stehekin, Washington, in the North Cascades, she shares tales of illustrious run-ins with bears and elk and deer – close neighbors in her wilderness setting. Her newest book 100 Skills You’ll Need for the End of the World (as We Know It) emerged from a short piece she wrote for Orion Magazine about 10 skills to hone for a post-oil future. Editors at Storey Publishing asked if she’d be willing to come up with 90 more skills for an illustrated how-to book.

“I argued and said I wasn’t a doomsayer,” Spagna explains, “and they said, ‘We get the humor. We want exactly the same tone.’” The result is a colorful and witty book full of information on how to navigate by the stars, how to become a falconer,  how to “plant anywhere and everywhere.” She writes:

Guerilla gardeners know how it’s done. Find a vacant lot or a median. Find cheap plants or free ones. Transplant starts from culverts or roadsides where they’ll other-wise be removed. Choose hardy varieties and watch for noxious weeds, grumpy landowners, and city officials.

Spagna worries that distance from the natural world causes people to put it on a pedestal, where they’re unwilling to write anything funny. “To have intimacy with something,” she says, “you have to poke fun at it. It’s a disservice not to see what’s humorous.”

What’s humorous, she says, are her wife’s conflicting emotions about the bears that threaten the historical Buckner Orchard she manages. In “The Woman Who Gardens with Bears” from her memoir Potluck: Community on the Edge of Wilderness, she describes her wife’s anger and concern and eventual begrudging acknowledgement that the animals are “pretty cute.” 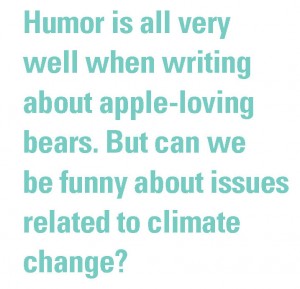 Humor is all very well when writing about apple-loving bears and peeing newts or lost and muddy explorers. But can we be funny about issues related to climate change?

Margaret Atwood does it, Spagna says, in the way she images the future in her dystopian trilogy, which includes The Year of the Flood. “What’s so likeable about the books,” Spagna notes, “is how Atwood makes fun, even, of the heroes of the stories, the ones who’ve figured out how to survive the ‘waterless flood.’ It’s the way she pokes fun at their righteousness that makes their righteousness stomach-able. Which is, I think, a lesson for nature writers even now.”

Brian Doyle – like others who poke fun at nature in the midst of working to protect it – notes that people don’t remember sermons and rants. “Readers and listeners do remember unforgettable stories,” he explains, “and I often think the best way to ease a story into a head or heart or a soul is by laughing first. Laughter opens doors and drops walls. People let their heat-shields down when they laugh.”

His newest book, Children and Other Wild Animals, includes a short essay, “The Newt Note,” in which he reflects on a powerfully hilarious coastal hike with his kids. He writes:

Not one of us ever forgot any of the wonders and miracles we saw, and we saw tiny shreds and shards of the ones that are there, and what kind of greedy criminal thug thieves would we be as a people and a species if we didn’t spend every iota of our cash and creativity to protect and preserve a world in which kids wander around gaping in wonder and hoping nothing else rubbery and astonishing will pee on them?

An awful lot of nature or environmental writing is stern and prim, he says, “or sticky guck, or drifty faintly spiritual muddle.”

“There are a million ways to be an environmentalist,” says Michele Nijhuis, editor of High Country News, “and humorous nature writing can really get at that.” She points to a recent essay she accepted by Nathaniel Brodie, a former Park Service ranger, who uses Edward Abbey’s domestic struggles with children and bills to reflect on his own transition from wilderness ranger to family man.

Nijhuis also accepted an essay called “Seward’s Folly” by Alaska-raised writer James Thompson about the gap between our traditional image of the tough Alaskan and Thompson’s own identity as a man who just likes to ski once in a while. “This kind of self-deprecation,” Nijhuis says, “is especially effective and welcome in environmental writing.” 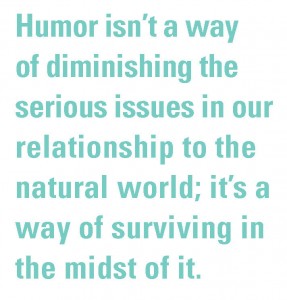 Gessner suggests that we need a new environmentalism, one that’s sloppier and funnier and that acknowledges our hypocrisy as people who inevitably consume resources and cause damage. “If I’m on my high horse,” he says, “I want the horse to fart occasionally.”

In his new book All the Wild that Remains, he examines the work and lives of Wallace Stegner and Edward Abbey. He traveled to their favorite places in the American West and interviewed people who knew them well. They were artists, first, he says, and then they were environmentalists. Abbey, in particular, he says, does a fine job of being himself in all his contradictions on the page. Here’s Abbey in The Journey Home.

Rumbling along in my 1962 Dodge D-100, the last good truck Dodge ever made, I tossed my empty out the window and popped the top from another can of Schlitz. Littering the public highway? Of course I litter the public highway. Every chance I get. After all, it’s not the beer cans that are ugly; it’s the highway that is ugly. Beer cans are beautiful, and someday, when recycling becomes a serious enterprise, the government can put one million kids to work each summer picking up the cans I and others have thoughtfully stored along the roadways.

Nijhuis points out that some of the earlier nature writers did have a sense of humor. “But there’s been a competing thread,” she says, “of over-earnestness and over-seriousness. It would be wonderful to see humor coming more to the forefront.”

Gessner cautions against writing with too much of an agenda. “Make something new and exciting and funny and engaging,” he says. “You’re walking along thinking high thoughts and you step in dog shit. If you can bring the humor to environmental writing, you open up a whole new audience.”

Melissa Hart is the author of Wild Within: How Rescuing Owls Inspired a Family. Her middle-grade environmental novel Avenging the Owl was published in 2016.

Add to Favorites Advertisement “There is nothing insignificant in the world. It all depends on the point of view.” – Johann Wolfgang von Goethe What … END_OF_DOCUMENT_TOKEN_TO_BE_REPLACED