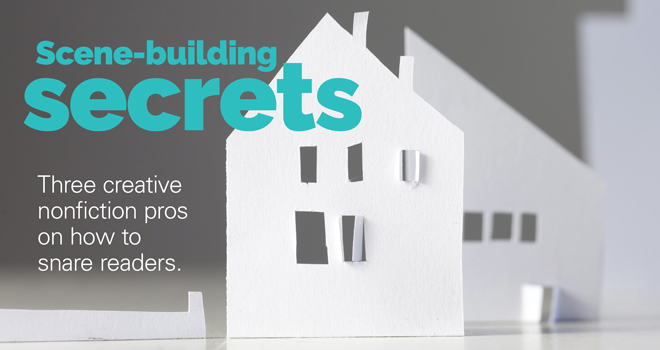 What do most readers think the crucial difference is between creative nonfiction and regular nonfiction? The former is exciting and the latter is…yawn…regular. Like the stuff they make you read on an SAT exam.

Creative nonfiction, however, is terrifically interesting. It crackles on the page thanks to having many of the best elements of fiction writing built right into it. Author Lee Gutkind claims that the form is like jazz, meaning it has “a rich mix of flavors, ideas, and techniques, some of which are newly invented and others as old as writing itself.” Teachers and writers of creative nonfiction agree that powerful scenes – especially opening scenes – are often what make readers sit up, take notice, and keep on reading.

If that’s the goal for your own creative nonfiction, read on and see what these pros do to send their readers hustling back for more.

Dinty W. Moore, a well-published author and director of Ohio University’s B.A., M.A., and Ph.D. in creative writing programs, knows that creative nonfiction scenes are anything but a mere matter of listing facts or recreating scenes. “Our essays are richest and most powerful when the author leads the reader on a journey of discovery, one where the questions are every bit as important as the answers,” he says. “Why are you writing this? What intrigues or confounds you? What can you never understand?” He echoes this impulse in his book Crafting the Personal Essay: A Guide to Writing and Publishing Creative Nonfiction, writing that “Privacy is for your diary. Essays are for readers.”

Some writers get that point but still miss the boat. Why? They don’t embrace the power and potential of scenes. Moore explains that “too often, student writers either give us static scenes, as if they were describing a still photograph of their grandmother’s kitchen rather than the active, busy, confusing family interactions that really exist, or they limit themselves to just the seen and heard and forget the sensory details of texture, taste, and smell. In real life, there are usually six things happening at once.”

Use dialogue – even if it’s not between people directly. This opening from her essay on onearth.org quotes a letter she received. “My internal thoughts become a response, as if I’m in dialogue with the letter,” she says.

“Dear Landowner,” the letter began. “As you may be aware, it is not necessary to have a large amount of acreage to profit from a gas unit…”

Oh no, I thought. The Barnett Shale has finally tracked me down.

Emphasize contrasts. Sunshine’s investigative news story for Fort Worth Weekly, “Mud Wrestling,” opens with a gorgeous natural setting that’s at odds with the main character’s behavior. “He’s pointing out ugliness underneath the water. We feel friction between the landscape’s beauty and the odor of decay,” she explains.

On a hot and glorious blue afternoon just west of Fort Worth, Tony Goodwin, 70, jabs a shovel into the moist bank of the Brazos River behind his home and dislodges a slick brown wedge of mud. The bottom layer resembles asphalt. “That’s decaying organic matter,” says Goodwin about the black goo underneath. “It stinks.”

Be specific with details. In this opening for her D CEO cover story, she sets the scene and reveals a distinctive quirk of a highly competitive executive.

Looking like a sun-drenched golfer weary from a morning on the links, Richard Allen folds his tall frame into a conference room chair on the 41st floor of a building off Dallas’ Ross Avenue. Despite a ruddy complexion and wide shoulders, the CEO of the California-based Allen Group says he’s never been particularly athletic and, as if to prove it, promptly fumbles with the remote control for a promotional DVD.

Kelly Caldwell, Dean of Faculty at Gotham Writers’ Workshop, adds that scenes work best “when they blend the familiar, the recognizable, and the strange: the idiosyncrasies, inconsistencies, oddball tendencies of being human.” She cites an example from the book The Dragon Behind the Glass by another Gotham teacher, Emily Voigt, where the author does a ride-along with Lieutenant John Fitzpatrick, a New York environmental police officer who is “in many ways a made-for-TV cop. Tall and muscular, crew cut, pounding on doors at 6 a.m.,” says Caldwell. “Only instead of hauling people out of their homes in handcuffs, he hauls out their illicit pet alligators, Nile monitor lizards, and African Diana monkeys.”

Just look at this excerpt from Voigt’s book and you’ll see what Caldwell means.

Fitzpatrick had spent two months studying birds in the jungles of Venezuela where he lost 30 pounds, grew a “full Grizzly Adams beard” and got all sorts of weird skin infections before realizing he was really a city person. He still loved tropical animals – from afar. His only pet was a pint-sized Maltese with a name he refused to disclose.

“Something along those lines,” he said.

“You get the picture.”

But don’t just take the words of these experts – go out and read the best creative nonfiction you can find. Joan Didion’s The Year of Magical Thinking. Cheryl Strayed’s Wild. Dave Eggers’ Zeitoun. Azar Nafisi’s Reading Lolita in Tehran.

I’ll wager dollars to donuts that the ones you like the most have well-wrought, imagistic scenes that in many ways read like a first-rate novel. Sure, these stories are rooted in true happenings, but that’s not the point. What matters to readers is that they can’t wait to find out what happens next.

By any measure, that’s successful writing.

Ryan G. Van Cleave is the author of 20 books, and he runs the Ringling College of Art + Design creative writing program.