If you are active on Twitter, you know the powerful capability of relaying a message in 140 characters. The least effective tweets come off as PR. The most effective are truly narrative – concisely slender and muscular at the same time. Author Teju Cole took Twitter to a new level this week by releasing “A Piece of the Wall,” an essay on immigration in approximately 250 tweets (or 4,000 words). Cole previously worked in the Twitter “genre” with his “small fates” project, based on a French style of newspaper micro-reporting. He was writing about Lagos, Nigeria (where he grew up), and while the tweets were compelling as individual info-bits, they lacked context and a larger narrative.

“A Piece of the Wall” has both.

You might think Cole would be restrained rhythmically by the space limitations, but the Bard College distinguished writer-in-residence achieves a poetry in the variation of his tweets that ranges from full-bodied sentences – “If I traveled to one of these distant Americas, I had to reimagine them. I 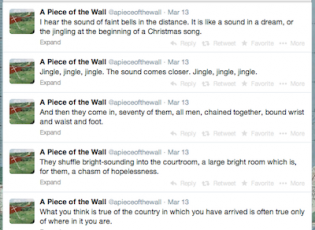 only slowly understood how I was connected to life there.” –  to clippy repetitions – “Jingle, jingle, jingle. The sound comes closer. Jingle, jingle, jingle.” He also developed an innovative approach to the technology that allowed him to quote the voices in his story: He opened several Twitter accounts with names such as  @potw_Teju and @potw_Bernie.

Cole’s printed work is also lyrical and richly layered. Moving those same qualities to Twitter allowed him another level of craft exploration that is exciting and instructive. (You really have to get down to the word level with this approach.)  Craft, however, was not his driving mission. “The point of writing about these things, and hoping they reach a big audience, has nothing to do with ‘innovation’ or with ‘writing,'” Cole says in a BuzzFeed interview. “It’s about the hope that more and more people will have their conscience moved about the plight of other human beings.”

“A Piece of the Wall” is a wrenching, revealing, disturbing and elegantly crafted essay, with implications for immigration reform as well as writing technique. You can read the entire essay here. Cole also talks evocatively about his experience living in the U.S. in this New Yorker video.