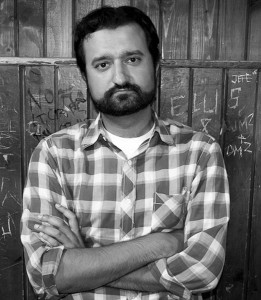 I get annoyed by the voice in my head, by the limits of its diction, by how certain it can seem of its own perspective, by how it too often wants to be heard when it should listen. It presides, a domineering minister over the rowdy parliament in my braincase, outshouting the vibrant din of all those other voices speaking there.

There’s Jackson starting so many of his stories, One time, my uncle Dewey….And Jackson’s dad Jack offering his trademark riddle: What’s the difference between a duck? And Traci telling any story about how she grew up Mormon and moved graciously away from the Latter Day Saints. Or my mother advising:Put the ginger in first and the garlic in later or the garlic goes bitter. Or my father delivering his joke in Punjabi about the old guy urging his young driver to race a yellow light: Sher bhun – “make like a lion” – the old man says before the car gets T-boned.

When the voice in my head becomes too much and the poem I’m working on requires a new trajectory, when it wants something other than the musings of the self, I summon these other voices.

It’s not their perspectives I’m after or even their narratives. It’s their language, the way the voice belonging to somebody else so easily wields words that wouldn’t occur to me and puts them in strange and compelling arrangements. What is the difference between a duck?

The richness of that other language is an oil well. It can unstick and propel the poem when it’s plum tuckered, when it’s completely jammed and baffled. In this sense – for me anyway – the use of dialogue in poetry is less about the introduction of another point of view than it is about introducing another kind of language, and when I think more on this, it occurs to me that finding another kind of language is the entire task of poetry. It’s the entire task of literature. The writers whose work I most admire, whose work I most desire to emulate, are those who use the words I wouldn’t think to use, who put those words together in arrangements that wouldn’t occur to me. This is what every stunning image, every good story and literary epiphany are made of: language jiggered and refigured.

The difference between bad writing and good writing is entirely in a writer’s diction and syntax. It has very little to do with subject matter. If you don’t believe me, read the poem “Merengue,” or any poem really, by Mary Ruefle. Read Skin, Inc. or The Maverick Room by Thomas Sayers Ellis. Read just about everything by Dean Young. Like the photographer who finds the improbable angle and perfect accident of light, what makes these writers’ poems – and I’d bet any other you or I cherish – remarkable and memorable is that they manage to say the thing we always wanted to say in a way we wouldn’t think to say it.

Still, sometimes we surprise ourselves. Sometimes that voice in my head, the one I get bored and irritated by, the one that belongs most to me, is the one that does the good work of conjuring the unexpected phrase and finding the new word order. Other times, though, its diction is too much its own, and all it can state is the obvious. When this happens, I cede the floor. I shut up and let somebody else do the talking because sometimes they say exactly what I’m meaning to say.

Jaswinder Bolina is the author of Carrier Wave, winner of the 2006 Colorado Prize for Poetry, and the forthcoming Phantom Camera, winner of the 2012 Green Rose Prize in Poetry. He teaches creative writing and literature at Lesley University in Cambridge, Mass.

Add to Favorites Advertisement “There is nothing insignificant in the world. It all depends on the point of view.” – Johann Wolfgang von Goethe What … END_OF_DOCUMENT_TOKEN_TO_BE_REPLACED