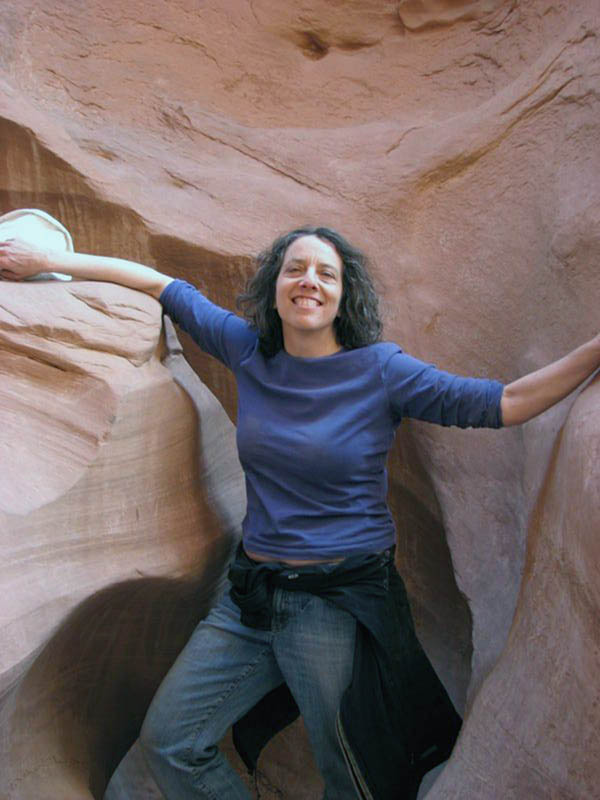 Cannoned into the world of poetry by Dickinson and the Hebrew Bible, Jacqueline Osherow, 58, a professor of English and creative writing at the University of Utah, is that rare poet whose voice embeds itself so deeply and indelibly in subject that it’s like watching the combined movement of river and current.

“I am a formalist with a colloquial style,” she says. “I love that mix. You have the rigid form, this strict set of requirements, and the colloquial voice, which creates an interesting tension.”

Her colloquial voice is elastic enough to ferry readers with metered lines and rhymes, slant and full, across the unforgiving terrain of “Orders of Infinity,” the Holocaust poem excerpted below.

Or to hustle them with a burst of exhilarating free verse through the comical, heretical “Slim Fantasia on a Few Words from Hosea”: 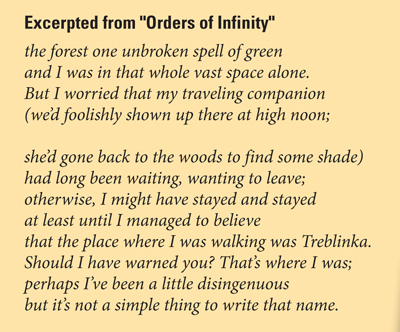 read him on an ideal

afternoon at the perfect

distance of a holy

turns out I’m the one

stones from the Bible:

take words with you

and return to God.

“I teach my students you have to find your own voice,” says Osherow. “I tell them about the talk I heard Isaac Bashevis Singer give when I was a kid. He said, ‘Vell, a story should have a beginning, a middle and an end. And you should be the vun who could write it.’ I thought, Right! I am going to write what only I can write. Students will come to me with their work. I don’t like to use the word ‘clichéd.’ It hurts the kids’ feelings, so instead I say, ‘It’s kind of available. It’s out there. Write what only you can write.’”

The author of seven volumes of poetry and the winner of the Witter Brynner Prize as well as a Guggenheim, Osherow is a rabid conversationalist whose words and thoughts tumble over each other like those of a Jewish stand-up comic fast running out of time and space. (Here she is on that: “I am a fan of stand-up comedy. You got to get to where you come close to crashing.”)

In “Slim Fantasia,” she avoids crashing by the strict use of the short line, which compels restraint. There is lots of movement, but it is controlled movement.

She once had a student who overdid the jokes in his poems. “Less is often more,” she told him. “You realize when you are editing that a joke may be funny, but it’s not doing the poem any good.”

As a child, she listened raptly to the solemn readings from the Torah on Saturday mornings in Philadelphia.

“’Who can ascend the mountain of the Lord? He who has clean hands and a pure heart.’ I loved that. I was totally grabbed by it. I still am,” she says.

They were the birth words of her serious poetry. Later on, her obsession with Yiddish kicked in. The language of ironic humor, and also the language of a murdered culture, of unspeakable loss.

Osherow writes frequently about loss, for instance, of the old Penn Station in Manhattan:

There must have been a train, a subway ride,

but what I remember is the palace

in between: its high glass walls alive with light.

In some ways, however, her overall advice is not about loss, but about keeping the work ethic in check and continuing to strive to improve.

“With the serious poem, the problem is poets take themselves too seriously,” she says. “There are poets who get lots of praise and awards and start to think that anything that comes off their pen is gold. They become complacent. Their work gets worse. You have to be hypercritical. That’s one reason Mark Strand remained a great poet. His work got better with time. He was never that sure of himself. He was never complacent. I tell my students, if it was good enough for Mark Strand, it’s good enough for them.”

Robert Hirschfield is freelance writer and poet in New York.