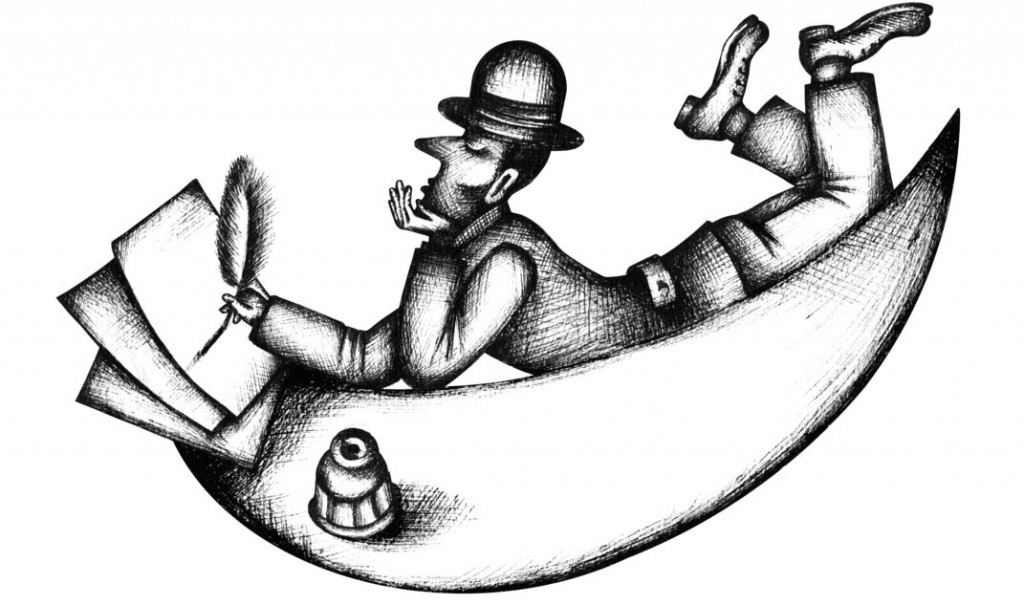 Making a living as a poet has never been one of the easiest literary paths. Today, there are absolutely no shortcuts to success. While many publications used to proudly pay for poetry in the days of yore, it seems these venues are few and far between in 2017.

I talked to editors at newsstand titles and heard the same thing time and again: Poetry coverage is shrinking. Kirsten Rian, formerly poetry editor for The Oregonian, noted that the newspaper “has been radically downsizing for a few years, and last year cut my position as well as most of the features editors and my boss, the longtime book reviewer. They did not replace our positions.”

The monthly news magazine The Atlantic once stood out for its inclusion of poetry and fiction in its pages. David Barber, a poet himself and longtime poetry editor at The Atlantic, says they are running far less poetry than in the past. “By the measure of editorial inches alone, The Atlantic simply can’t be as welcoming to poets as it once was. I’m hoping there might be a reversal of fortune at some point, but for now things seem pretty much stuck in limbo.”

Other publications, like The New Republic, continue to publish poetry, but simply aren’t accepting any new submissions right now. The magazine spent 2016 working through a backlog and responded to all emails with a form letter saying to check back in 2017.

Fear not, however: The world needs poetry. You may not be able to buy that Bentley with the fees from your first publication, but there are magazines that pay for verse even in this modern age. And for what it’s worth, stable income is hard to come by for most writers without cobbling together a variety of payment sources, and poetry is no exception.

Here are your best shots for getting paid for your poetry in 2017.

Getting in front of an editor

One bright side is that while paying opportunities haven’t increased, technology has at least made the submission process easier for some venues. Both Highlights, the children’s magazine, and The New Yorker are using Submittable, an online submission portal. Gone are the days of tracking down email addresses or mailing off manuscripts that were likely going into a seldom-read slush pile. With Submittable, you can receive status updates and track your poems’ progress as they move through the editorial process.

Some publications do charge a fee to use Submittable – usually smaller literary journals. But both Highlights and The New Yorker are free of charge for poets. Make sure not to take advantage of the ease of submissions and inundate editors with your work; selectivity is still key for leaving a lasting, positive impression, even when a piece is rejected.

Two magazines readily available at national retailers publish poetry in every edition and want to hear from you, no matter where you are in your career. The Sun and The Christian Science Monitor are both paying markets that regularly purchase work from writers without regard to résumé. If it sometimes feels like name or degree means everything in the literary world, these are two places that simply isn’t true.

“I’m looking for bright, insightful, generous (as in outward-looking) poems that use language well. Monitor readers are intelligent, informed, engaged, open. The magazine is also a family publication, as well as a global one,” says Owen Thomas, deputy editor of the “Home Forum” section.

“Surprise me, delight me. Help our readers see the world and their experience in a new way,” he says.

The magazine receives upward of 50 poetry submissions a month and publishes two. Writers should submit no more than five poems at a time. The publication pays $40 per poem and $25 per haiku. Thomas says he’s unlikely to buy a group of poems and is very serious about line limits – each poem should contain no more than 18 lines. You can read more specific submission guidelines on the Christian Science Monitor website, but generally it avoids anything about death, sickness, or aging.

The Sun is an extremely popular market, with many poets competing for limited editorial real estate. Editorial assistant Derek Askey estimates that 25 percent of the 1000-plus submissions each month are poems vying for the one or two spots available in each of the 12 issues. It pays between $100 and $200 and often buys multiple poems.

“We have more than 70,000 subscribers, so poems that can appeal to a wider audience are more likely to be successful with us,” says Askey. There are no particular subjects to target or avoid; like with all publications, studying back issues is your key to targeting your work. “We tend not to publish very opaque poems. Poems that are academic or willfully ‘difficult’ tend not to make it into The Sun. We like clear and accessible language and images. I’d also add that I often hear from writers who admire the magazine but have never submitted to us. Don’t do that! We’d love to have the chance to consider your work.”

There’s a literary magazine for every taste. Many have unique voices and valuable purposes, but for the sake of making a living, most just aren’t viable options to get paid for your work. If you love a journal and respond to what you read there? Submit your poetry and feel great when you see your name next to writers you respect. That’s a wonderful moment.

There are literary journals out there that publish substantial amounts of poetry and pay for it, however. Your neighbor may not be familiar with them, but when you dive into their archives you’ll find a lot to enjoy.

Rattle aims to “promote the practice of poetry,” publishing more than 2000 poets (including 400-plus poets who’d never been published before) in the journal’s history. What makes the journal unique is how it does things: half of each issue is open to all submissions, but the other half is what it calls a “tribute,” which acts as the issue’s theme. Past topics have included adjuncts, law enforcement, or poets of faith.

“We received about 37,000 submissions in 2016, which represents around 120,000 poems. We only have room to publish 300 of them, so the odds are always ridiculously long. That’s just the way it works in the golden age of poetry,” says editor Timothy Green.

“Rattle was founded to be an alternative to academic poetry. We don’t care about cliques or schools or scholarship – we just want to read poems that make us feel something or think about life in a new way. So our ideal reader is someone who doesn’t read much poetry, picks up a copy in a doctor’s waiting room, reads a poem out of boredom, and thinks, ‘Hey, I kind of like that.’ Maybe they surprise themselves in reading a second poem. And if later that night they feel inspired to write their first poem since high school, that’s pretty much as good as it gets.”

Submissions are open year-round and are always free. There’s a print journal as well as some work available online, and Rattle pays $100 per poem.

“The only advice to first-time submitters is to not give up. The odds are long, but we treat all poems fairly and on their own merits, so the next set will always have a chance. Persistence pays. And that’s universal to any kind of writing or art. The most successful are inherently the ones who didn’t give up,” says Green.

Guidelines on Rattle’s website, for general and tribute submissions, give more information about length and logistics. There’s also a menu tab marked “random” that will give you just that – a random poem previously published. What better way to get a sense of the Rattle aesthetic?

To submit: Send poems via Submittable during open reading periods. No mailed or emailed submissions.

The year 2017 marks Slice’s 10th anniversary, and the magazine just keeps growing. Slice is a smart journal to read and submit to if you’re keen to be seen as a poet worth noticing. Granted, the fact that the magazine only publishes two issues a year, with a firm foothold in the New York publishing scene, may sound a bit daunting to a new poet. And you should be impressed: Serious, slick work is coming out here. But Slice is also committed to providing a way for new voices to be heard, recognizing that publishing can be an insular world with a lot of closed doors unless you have connections.

Accepted poets are paid $75 per poem, and reading periods open up twice a year; submissions are themed pretty broadly. The next reading period will be open from April 1 to June 1, 2017, though a theme had not yet been announced as of press time.

Rare – if not nonexistent – are the poets who can make a reasonable living from poetry contest winnings. Still, competitions like these provide opportunities to get your work in front of entirely new eyeballs. Your local state, university, library district, or other organization is likely to have some kind of event that incorporates a writing competition. Instead of, ahem, writing these off as amateurish or beneath your notice, take advantage of regional challenges. They are a means of earning money, staying motivated, gaining readers, and polishing your craft.

Madison, Wisconsin, annually asks for verse – from haiku to excerpts of longer works – to put on buses as well as promotional materials. There’s a different theme each year, with categories for all age brackets. English and Spanish poems are both accepted.

While prize amounts are not listed, winning poems are presented with exceptional visual designs. The combination is something any poet can be proud of. For more information, visit cityofmadison.com/metro/poetry.

The year 2017 marks the 35th anniversary of this contest – the one I grew up reading in the paper every year, the one that I followed, where early works by teen writers caught my attention when I saw their bylines in notable publications years later. So the ADN contest holds a place in my heart as an example of how “local and little” can be a stepping ground.

The University of Alaska Anchorage, ADN, and Alaska Center for the Book all partner to present this contest with cash prizes for kindergarten through high school, as well as adults. Winners are published in a special newspaper supplement magazine, We Alaskans, as well as online. For more information, visit adn.com/creativewritingcontest.

These competitions are just the very tip of the iceberg. To learn about more contests, visit our contests section for a complete listing. You can also check our latest Guide to Writing Contests for a variety of seasonal offerings.

Remember: Poetry that pays is not extinct – it’s just a little harder to find. Be persistent and dream big. Support poetry in all its forms, even at the lowest of levels. The key to ensuring paying poetry markets survive is to keep the art alive and read. Join the fray and champion the form – the paychecks may not be far behind.

Eliana Osborn is a busy freelance writer focusing on education and family issues for national publications. She is hoping meditation really is going to solve everything.