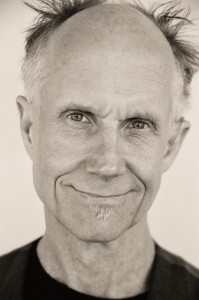 A sure measure of Tony Hoagland’s passion for writing resides right in the title of his new collection: Twenty Poems that Could Save America and Other Essays. Hoagland, who besides writing essays is a prize-winning poet and teacher at the University of Houston, laments the increasingly rapid disappearance of poetry in our schools and the attendant forfeiture of the love of language brought on by that vanishing curriculum. Poets and other writers, he says, “preserve the English language. As long as we make these little cages called poems or prose, there’s a place where the language is still getting to play at its full potential, and even managing to expand those perimeters and those boundaries. When you write well, you are doing what you can do. We just have to keep our eye on the ball.” Hoagland’s next book of poems will be published in September.

Preparation and process: My favorite procedure is to get up early and sit in an easy chair in my long underwear drinking my tea and writing in a notebook. Periodically, I’ll take my notebook and type it up on a manual typewriter, and then I’ll take that page and amend it, feeling my way forward and making selections and jettisoning some of it, draft after draft. I very rarely draft a poem or an essay from one end to the other in an arc, which is a classical way to compose. [My method] is labor-intensive, but it’s a form of play, and, especially for poetry, it seems absolutely crucial to preserve that sense of freshness.

Poetry versus essays: Writing poetry is a profoundly different discipline than essay writing. Poems celebrate a certain kind of peculiarity of proportion. Essays speak to and from a rational side of the mind. It doesn’t mean that they aren’t creative and ornamented – rationality and irrationality collaborate in the making of a poem. When we read an essay, we’re enjoying the pleasures of the deductive mind. And if a poem isn’t working for me, I go to an essay. Essays will yield to your willfulness and your discipline and your work ethic, whereas poems often won’t – they aren’t resolved very often by trying hard.

Maintaining perspective: [When I was younger] I was living a vagabond life and encountering a lot of people who were living outside of all the systems. That’s very important for writers, because we really are the outsiders, and we have to maintain our outside perspective. Our job is to be in the interstices and between those systems. We really can’t speak truthfully or with that renegade precision that turns over rocks unless we know how to navigate between the systems and not to be co-opted by any of their resident vocabularies.

Research: I’ve always enjoyed reading literary criticism and writing it too. It was a way I could educate myself. But my main research is all the poetry that I’ve read and all the thinking that I’ve done. Scholars look things up, and poets make things up.

Advice: The point of being in a writing group or a writing workshop is to learn how to be a better writer. I tell my students that they’ve got to remember why they came to writing, which was out of love and delight or need. This sounds quite idealistic, but it’s quite true: Competitiveness and striving and self-commodification or envy will ruin your writing. What makes it worth staying in the activity, the art, the craft of writing, is your love of other people’s work and your aspiration to get as good as that. You have to watch out that your greed does not in some way trample your love of the language and the craft. There are periods of time when, just like everybody else, I’m consumed by my envy or my feelings of neglect or inferiority or hopelessness. It contaminates my spirit, it ruins my days and at that point, I have to back away because I’m not writing in a way that is giving me pleasure. When that happens, I get in the bathtub and I read Frank O’Hara.