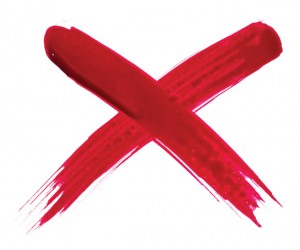 At work, we have a new editor – whom I’ll call John – a retired speechwriter who works for us on a freelance basis between stints in his garden. I looked him up online and squinted at a small photo of a sharp-eyed, 60-something man who looked exactly the way the New York editor of my imagination looks.

Before sending John copy for the first time, I had to gather my courage, as I always do when starting with a new editor. I wandered over to chat with my “office wife,” Laura, to steady my nerves, then attached my Word document to an email, pressed send and went out to lunch.

Afterwards, I opened my email and tried to quell the panic. John’s red, editorial “track changes” were as abundant as blood at a crime scene. And he had sent a brief, to-the-point note in the body of the email.

Lydie,
I don’t know what this phrase means. Can you clarify?
Why would you use an ampersand? Just use “and.”
Can we make it ethnic rather than cultural diversity? That’s really what’s being presented.
Schoolyard one word, not two.
Regards,
John

What I “heard” John say in his perfectly reasonable note might go under the heading: How could you be so incredibly stupid?

Lydie!
God! Can’t you be more direct? What the hell are you trying to say?
What’s with the ampersand? Are you trying to be cute? Or are you just lazy?
What kind of idiot confuses ethnic and cultural diversity in this day and age?
School yard? And you call yourself an education writer?
Geez!
John

It’s not easy being edited, but it’s the single most important part of being a writer, which I need to congratulate myself for being in the first place. I’m not a big-shot writer by any means; I publish school profiles and blogs for a website about education for parents. Done well, it looks easy, but it’s not easy for me.

Before school profiles, I published short essays about parenting for a monthly publication in Manhattan, the free kind you pick up from a box on the corner. My first editor was a British woman named Helen who rarely commented on my work, which was exactly the feedback I needed then. It was enough that she accepted my writing and – most of all – that she paid for it. “I like this,” she would scrawl on an essay I had sent her through the mail with a self-addressed stamped envelope. “I can offer $50. OK? Let me know.”

Only once did Helen comment on the content of my writing. It was a profile I’d written about my son’s trampoline teacher, who held forth on the importance of trusting children to find their own range of safety on the trampoline, like jungle-born babies who live near tiger pits and don’t fall in.

My ambition, like many new writers, was far greater than my skill. I knew nothing about profiles. What questions should I ask? Did I need a tape recorder? After years of reading New Yorker profiles by John McPhee, I imagined I could write one. Even my choice of subject – a solitary iconoclast who lived in a studio surrounded by felled branches he had collected in Central Park – was McPhee-esque.

But once I started talking to my subject, he stumbled in my estimation: I found him at first quirky, then strangely unreliable. McPhee has said, “Structure is not a template. It’s not a cookie cutter It’s something that arises from the material once you have it.”

My eventual solution was to embrace the teacher’s flaws; my first line mentioned that he never answered his phone or called me (or any parent) back if I had questions about his classes.

“You are a very unusual writer,” Helen wrote in the margins of my finished piece. I wasn’t sure if this was good or bad, until later that year when I learned she submitted my profile for a Parenting Media Association award – not a Pushcart or a Pulitzer, but it might as well have been for the confidence it gave me, even though it did not win.

In the midst of countless rejections over a dozen years of writing, well-timed encouragement like this has kept me going. Back then, I’m not sure I would have held up under the laser-like editing I undergo today. Writing, which at first seemed easy, has only become harder.

Next, I worked with Christopher and Charlotte at a free weekly on the Upper West Side. Christopher offset his sharp critiques – “Hate, this!” – with humor. “You’re smart,” he’d say, “but what’s with this opening?” And then he’d explain what a “lede” was and how I’d “buried it” and what a “nut graf” was and where it belonged. (For a time, I spelled these words “lead” and “graph” in my “hed.”) Not only did Christopher’s calls pull me out of misery, they also taught me structure: “Love paragraph two!” he’d say. “That’s your lede.”

Charlotte was all cheery professionalism. Our entire relationship took place via phone and email, and I looked forward to her even-tempered, upbeat voice however it came to me. She gave quick, clear directives and offered me steady work. I bought my first reporter’s notebook during this time and, under her guidance, wrote my first cover story. Most important of all, Charlotte assigned me school profiles, and I found I could put my nine years of teaching experience to good use.

It’s rare to find an editor you can trust absolutely. A great editor becomes a part of you, gets inside you and is your first defense against the world. He or she spares you from egregious mistakes while breaking down your defenses. He or she helps you become more fully who you are.

Such is the case with Nancy, whom I met at the corner of West 96th Street through a mutual friend. We discovered we had published essays in the same small parenting magazine. We exchanged essays and launched into an informal writing-and-editing partner exchange that has lasted years.

Nancy is the most vigorous editor I had encountered. She urged me to edit her work just as vigorously, and this pushed me to think more critically about the emotional impact of words on a page. Writing had by then become integral to my development, like walking or therapy. Nancy deleted the “somewhats,” “kind ofs” and “probablys” I used to soften my opinions. Stripped of my prevaricating voice, I hardly knew who I was. Yet Nancy seemed to want to find out. She urged me to step center stage in my essays, asked for clearer transitions and, in the process, became one of my best friends.

Even so, I can trust that our friendship will not interfere with Nancy’s passion for getting it right on the page. About a recent essay, she wrote: “I really like this, and as I said, it made me cry, but there is something about it I can’t put my finger on that makes me uncomfortable. Maybe this ending is what my old writing teacher, Philip Lopate, would call ‘unearned.’”

I’ve approached each editor with anticipation and terror for all the faults, misspellings and small-minded moments they’ll unearth in me. It’s humbling to learn, over and over again, just how disordered my mind is when it comes to structure. It’s no wonder I stand trembling before a new editor.

The act of writing can shine light on the painful, musty corners of our lives, but in conjunction with the right editor, it’s like composing music. At times, the editing process has touched me in dangerous ways. The editorial exchange is prickly at times, but it is the best way I know to transmit ideas.

The reason I know I can work with John is that I’ve learned over time that the best editors forgo the friendly greeting and enter into the ultimate act of loving-kindness – an insistence that my words be clear. There’s no greater feeling than getting it right. And nothing’s more satisfying than when I’ve earned my ending.

Lydie Raschka is a writer at Insideschools, a website for parents. She has written essays for Salon, The New York Times and The Washington Post.