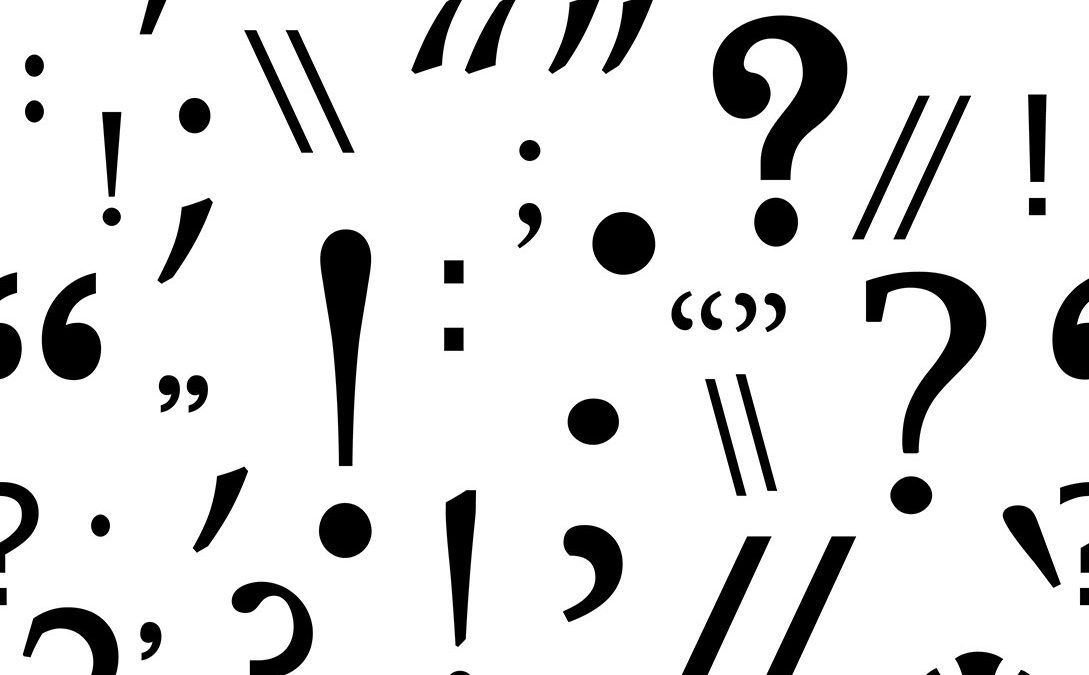 Once a writer sent a manuscript off to his editor without a speck of punctuation. His note explained, “I’m also sending you a bag of commas, periods, exclamation marks, and so on. You can put them wherever you like.”

I don’t recall where I heard this story, but it captures the confusion we sometimes feel in the punctuation department. Not all writers are grammarians or punctuation experts; we write because we love to read, and we want to create the sorts of things we love reading. We handle the language by an ear trained through years of reading and punctuate the same way. So here is a quick review of some of the stickier situations.

Subscribe today to The Writer magazine for tips, industry news, reviews, and more.

According to William Zinsser, author of On Writing Well, “There’s not much to be said about the period except that most writers don’t reach it soon enough.”

Periods also go inside the quotation marks and inside parentheses that contain independent sentences, thus

Jane said, “We argue about periods the whole night long.”

Jane argues about periods (until the scones arrive).

And here are some oddities about abbreviating with periods. No one called President Obama BHO, but in the ‘60s, we had JFK and LBJ. Notice the lack of periods; however, it’s J.K. Rowling. When an abbreviation ends the sentence (and it isn’t an exclamation or question), no additional period is needed. Example: Mark was glad he wasn’t a Jr. versus Was Mark glad he wasn’t a Jr.?

Easy does it! I tend to plaster these all over manuscripts – and especially email! Then I have to take them all out! Doesn’t this seem over the top and gushy to you!? (By the way, never use two ending marks. Can’t you make a decision, for goodness sake!?)

Some editors feel they’re antiquated and would rather their authors commit a multitude of comma splices (stay tuned for more on those) rather than use semicolons. I, on the other hand, am always impressed when I see them used properly. Unless verboten, plug them in in two situations:

To separate two independent clauses (aka sentences that can stand alone) that bear some relation to one another: Virginia enjoyed using semicolons; William did not.

To separate a series of items that contain commas: I invited Audre, the writer; Max, the editor; and Norman, the artist. With semicolons, it’s clear I invited three people and told you something about each. Without them, you might think I invited six people but was only sure of the names of three.

But what follows a colon doesn’t have to be a list. Like the semicolon, it can separate two related independent clauses, except that what comes after a colon usually has a closer relationship to the preceding than what comes after a semicolon. I think of a colon as announcing that something is coming, as in this example: There’s a lot of activity at the book store today: Jhumpa Lahiri is coming for a book signing!

While side thoughts are often tucked away in (a pair of) parentheses, they can also be set off with a pair of dashes – longer than a hyphen – to draw more attention to the material. You can also use a single dash to set off an additional thought or explanation – though it’s often seen as a less-formal choice.

Brackets perform a couple useful functions. Here are the most common:

They set off information from a passage already in parentheses: (Charlotte never thought about brackets [judging from her work] and got on quite well without them).

Everything within quotation marks should be true to the source; however, if you need to insert some clarifying information or make the quoted material work grammatically with your sentence, you can do it with brackets: The article said, “George Eliot was a famous Victorian writer and [she] wrote many books.”

I promised I’d get to the comma splice, didn’t I. Confession: I never knew about this error until I began teaching English in a community college – and by then I already had some seven children’s books behind me. But the error is real. It’s the result of stitching two independent clauses together with only a comma between. The comma is not considered strong enough for the weight of two sentences, at least that’s how I think of it. (Um, did you catch my comma splice in that last sentence?) You will see them in print (which is what makes it so hard to teach students to avoid them). Writers use them for two balanced, related, and usually short sentences; to show stream of consciousness; and because they’re allergic to semicolons.

You have several options to avoid the comma splice. Put a period between the two independent clauses. Put a semicolon between them. Get really fancy and add a conjunctive adverb (however, therefore, meanwhile, etc.) or transitional expression (in fact, for example, etc.) after the semicolon, like this:

While we’re in the neighborhood, notice the commas in the series of coordinating conjunctions above. Many writers wonder whether or not they should use that last comma. This is a comma with its own name: the Oxford comma. (Want to look like you went to Oxford, include that last comma.) I say use it because it can avoid confusion:

She loves the Potter characters, Wonder Woman and the Cookie Monster.

Unless they are short and clear, introductory clauses and phrases should be set off with a comma, just as I have done in this sentence. Sometimes the lack of that comma can trip up a reader, making them read a sentence twice to understand. Here’s an example:

While Ralph was happy with the work situation involving two friends was not the best idea.

Was Ralph happy because his two friends were involved? Or simply happy about the work situation? It takes careful reading to know; clarifying it for readers is simple:

While Ralph was happy with the work situation, involving two friends was not the best idea.

Remember non-restrictive and restrictive clauses from high school? They can be mind-boggling. Think of a pair of commas setting off a clause as non-essential information, a little nice-to-have tidbit, but extra. The commas tell readers the piece is an aside, such as an actor might utter to the audience. It follows the same logic as putting information in parentheses. The clause is non-restrictive because it doesn’t restrict, or define, the thing being discussed. Hence, Maya chose the book, which Leo also liked, as the award-winner. What Leo liked is beside the point (Maya’s decision), but it’s nice to know he agreed. Remove the commas to demonstrate the opposite situation. When the information tells readers which one you’re discussing, it restricts it to this particular item; therefore, the information is essential. You don’t want to tuck it away as an aside; it is too important. Thus, Saul chose the book that Khaled wrote as the award-winner. The clause that Khaled wrote tells us which one of the many books Saul chose. To comma or not depends on what you’re trying to say.

I expect writers know that apostrophes morph into “single quotation marks” to mark a quote within a quote, as in: According to Carson, “Dr. Jones studied the problem and called it ‘The worst case [she] had seen.’” And everyone knows, I’m sure, that apostrophes show contractions and possession. However, one situation that breaks the rules confounds many writers: its/it’s.

I was making the rounds at a book fair one day when one title, displayed in stacks on the table of a bright-eyed, eager author, jumped out at me. It was something like this: Georgia: It’s History and Lore. The author may as well have posted a sign, “Get your self-published, unedited book here!” (This is a great example of why editors are so valuable in both traditional and self-publishing. Even when you know how it works, it’s easy to slip up.) It’s is a rule breaker; it can’t be both possessive and a contraction, so it follows the contraction rule: it’s equals it is. That means its is possessive – without the apostrophe.

Bear in mind that some punctuation uses are optional (particularly true with commas), and the final decision may depend on the publisher’s house style. Unless you know what that is, the best idea is to choose the most common approach and be consistent. When in doubt, you can always look at a reputably published work, preferably by the publisher you plan to approach, to see how the author handled it.

But keeping your old high school or college grammar text handy is not a bad idea either.

Gail Radley is the author of 24 books for young people and numerous articles for adults, including, most recently, “The Devil Knocking” from the November 2017 issue of The Writer. Recently, she stepped away from teaching English full time at Stetson University in order to devote more time to freelance writing and editing. She lives in DeLand, Florida.