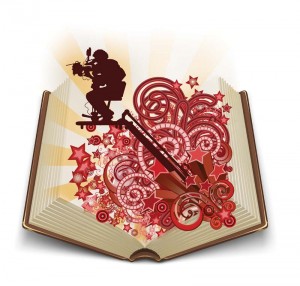 Andrea Portes wrote the novel Hick and sold it to Unbridled Press in 2007. She also wrote the 2011 Hick screenplay starring Alec Baldwin, Juliette Louis and Chloë Grace Moretz. Portes says Hollywood wants books, and she’s proving it by shopping around her subsequent works. “Producers need intellectual property – a novel, a book,” she says. “The thing that’s missing in L.A. is good ideas. The most important thing to realize is that producers want content. They want intellectual property. The fact of the matter is: If you have a good book, a good children’s book – whatever it is – it’s like gold.”

Portes’ literary manager Todd Moyer is CEO of Dark Matter, an L.A.-based transmedia company that specializes in turning comic books, graphic novels and young adult novels into film and TV. He has shepherded more than 30 films including The Mask, Timecop, Virus, Barb Wire, Mysterymen and Alien vs. Predator through major studios.

As literary manager, Moyer guides Portes’ career including the writing and publishing of books and screenplays, procuring and selling those rights to film producers and even steering Portes toward eventually directing movies. Moreover, Moyer says that the old-school model of literary agent is fading. “I decided I didn’t want to be a book agent,” he says, “but I wanted to advise clients on their careers long term.”

“Agents have a billion clients and they only care about what they can sell right now,” he adds. “I have passion for my clients’ work. I get film agents to read a work within 24 hours.”

Prolific, fast moving and effective are the hallmarks of transmedia methods. “I like to select the film rights selling agent,” says Moyer. “I select the people I want to work with. I got the book-to-film agent at ICM [International Creative Management] to read Bury This [Portes’ second novel] within 24 hours.”

Not every author’s book-to-TV or books-to-movies scenario has as clear and dense a trajectory, however. W. Bruce Cameron broke into book publishing in 2001 with his collection of humorous essays 8 Simple Rules for Dating My Teenage Daughter. The book then became a TV series that ran from 2002 to 2005 and starred actor John Ritter.

“I risked it all and moved from Colorado to Los Angeles,” says Cameron. “I uprooted myself. I moved out here and worked really hard to establish myself.”

Cameron’s 2010 novel A Dog’s Purpose: A Novel for Humans hit The New York Times Best Seller list for 52 weeks. A Dog’s Journey: Another Novel for Humans was published in 2012. “It was a huge change and a financial risk, moving to L.A., and I didn’t know anyone and I’m old and it’s a weird time,” he adds. “And for a while it looked like it wasn’t paying off.”

But must the Tupelo, Miss.-based or the Tea, S.D.-based writer uproot and move to L.A. to sell a book to Hollywood? Not necessarily. Moyer’s lived the book-to-film business for years and has every right to be jaded beyond belief; if he is, he doesn’t act it. And living in L.A. isn’t the golden ticket necessarily. “One of the best ways to get someone to read your material is through the assistants,” he says. “They control everything. You always get the first chapter read by the assistants, and if they love it, they’ll start talking about it.”

Cameron’s course is one of taking action as well. “Having a relationship with agents is the easiest way to get your book looked at,” he says. “But there are development people at all of the production companies, and it is their job to turn up with interesting properties. Call and ask to speak to the development person at production companies. Telephoning might seem like a hard thing to do, but remember that that is their job.”

Not everyone writes the Madame Bovary– or Pride and Prejudice-literary-type book. Getting a genre fiction book ‒ romance, sci-fi ‒ into consideration for film rights is also possible. The Denver, Colo.-based Nelson Agency takes its genre fiction writers’ books directly to film agents once print rights are sold. “We contact film agents we work with on a regular basis,” Nelson’s literary agent Sara Megibow says, “and we’ve sold 25 out of 27 of our clients’ works.

“I guarantee my clients will be seen by Hollywood and considered for foreign translation,” she adds. “Our firm sold 300 film properties in 12 years; 20 of those films were made.”

The Princess Diaries movie deal was handled by Brandt & Hochman Literary Agents’ Bill Contardi, an agent who also handles dramatic rights. Contardi says that even books not currently considered hot properties can be sold to the film industry. “The Princess Diaries was not a huge book until the movie people sparked to it,” he says.

With self-publishing books changing the book publishing landscape, it stands to reason that an author can also get his or her book sold to the film industry. That’s where Nat Mundel of Voyage Media steps in. Mundel and his partner Steve Harrison have The Hunger Games, Secretariat, Blind Side, The Sum of all Fears and dozens of other films to their credit. Mundel helps bridge the chasm between authors and Hollywood, offering book authors the teleseminar series, Sell Your Book to Hollywood.

“Authors solve a huge problem for producers: a problem of time and money,” says Mundel. “Authors have done a great amount of what’s called ‘development work’ for the producer by the nature of writing a book. They’ve developed characters and story lines. It’s easier to mine from a novel than start from scratch. It takes care of a ton of time for the producer, and they don’t have to pay an expensive screenwriter. The author saves the producer a lot of time and money.”

Contardi notes that a book selling like hot cakes doesn’t hurt anything either. “Have a book that is doing so well that you, the writer, have no need for a middleman,” he says. “Usually that situation means you are sought out by the Hollywood buyers being the heat-seeking missiles that they are.”

He also speaks frankly of the many steps that can hiccup the entire books-to-movie process. “Many [books] are optioned but very few get bought,” he says. “There is a high mortality rate in the development phase. Since most books do not get bought until the script is done, approved and cameras are ready to roll, most writers only see the lesser money, i.e., the option not the purchase money, and in most cases it is hard to get rich on option money.”

“In movies,” he adds, “they all line up and then they decided not to make it.”

And Portes keeps writing, keeps pushing for her own film rights sales and keeps the light burning for book authors everywhere who are looking to see their own works on the silver screen. “We novelists tend to beat ourselves up,” she says. “I was actually mad at my manager for sending Bury This to Josie Freedman at ICM, as she’s arguably the best in the business for book-to-film. She reps Bret Easton Ellis. I felt like an idiot approaching her. We gave her the book on Tuesday. She called us back on Thursday. She wanted to meet ASAP. She repped me immediately. Now she reps all my projects, Stupidfaces, Super Rad and, of course, Bury This.”

“That shows you the level of excitement possible for a novel from a neophyte, even a novel that is dark and weird,” she adds. “People in Hollywood want to be excited by a new property. That’s what it’s all about, really. They get so much garbage, when they get something original, it’s thrilling.”

But perhaps most thrilling of all to the writers whose stories get told on the page and on the screen.

Cathie Beck is the author of the memoir Cheap Cabernet: A Friendship. She is a Target Stores Emerging Author.