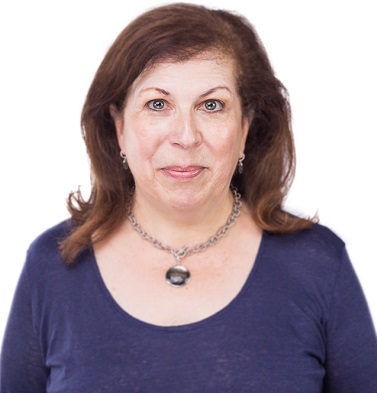 Best known for her work as creator and lead writer of the short-lived but universally loved TV series My So-Called Life and for writing the book for the stage musical Wicked, Holzman has spent her career writing for actors and making frequent cameos in her own productions.

Her most recent work, Choice, a comedic play about a very serious topic, premiered last fall at Boston’s Huntington Theatre Company. It examines the complexities of family and friendship while giving audience members one-liners such as “I was a philosophy major with a concentration in yarn” – spoken by a post-grad millennial wrapped in a thickly woven shawl.

It is with these quick, witty lines that Holzman draws listeners in and keeps them near. She takes her work seriously but is astutely aware of the comedic moments that surround us in life. Why ignore them? Holzman harnesses those bits of hilarity to make TV shows and stage productions to which people relate.

PREP
It all started with poetry – although Holzman admits that she has not written a stanza in years. In the undergraduate creative writing program at Princeton University, Holzman spent four years writing poetry and won a prize from the Academy of American Poets. Eventually, poetry led to comedy writing, which led to writing for actors onstage and in film. Poetry moved to the background.

She hasn’t written a line of poetry since college, but the lessons she learned from that period – the economy of words, the rhythm of a sentence, the power of choosing a single word – are infused in everything she has written since. The feeling she gets from the sound of a certain word is a powerful compass.

“I feel very strongly about everything that I learned and everything that I was practicing when I was a person who wrote poetry. It really fed my screenwriting and my TV writing and my comedy writing and, certainly, my lyric writing,” said Holzman. “My poetry led very directly, in a lot of different ways, to how I write. People might not make that connection. But I make the connection.”

Many writers find comfort within one style or another, but not Holzman.

“It all feels like different aspects of the same thing. It’s just me being a writer,” she said. “Different subjects present themselves in different ways. A certain idea may come up and you go, well, that’s for the theater, or a play, or that could be a musical. It’s an intuitive thing.”

MARINATE
A writer’s location can greatly affect the final product, and each one has preferences and process. Picture Holzman in her shed-turned-backyard writing retreat. It’s a small, comfortable space that her husband, actor and writer Paul Dooley, created. No phone, just a computer and her imagination.  Holzman wrote much of Wicked there, and while it proved the ideal setting for that particular project, she admits that mixing up her scenery can allow ideas to flow.

“What I tend to do these days is a combo platter. I get to a point where I get a little stir crazy, and I don’t like to be only in one place. Sometimes I write sitting or lying on my bed,” said Holzman. “That tends to be a thing I do. A lot. I’ve got to admit.”

Or she will visit the freelance writers’ trustworthy retreat – the coffee shop. It’s a place where she has found writing prosperity throughout her career.

“I’m around people who – hopefully – aren’t going to talk to me,” she said. “They are busy doing their thing. I like to have a quiet buzz around me that doesn’t involve me. I like music. Sometimes I’ll get obsessed with certain music that I’ll play during a project. There isn’t any one way.”

Where does she try to avoid doing her writing? In an office – which can prove difficult when working on a TV show. In addition to My So-Called Life, Holzman was on the writing team for the ABC series’ thirtysomething, which ran for four seasons, and Once and Again, which lasted three.

“When you are in production on a TV show, you sometimes end up having to write in an office because your office is right there near the set and they kind of need you around,” said Holzman. “That’s something I’ve certainly done, but I don’t do it by choice.”

In addition to serving as her cottage builder, Dooley is also one of Holzman’s first readers after she completes a draft. Her daughter Savannah, also a writer, participates early in the process as well.

“You can’t overuse anybody, even your daughter or your husband,” said Holzman. “You have to be honest with the person about what you want.”

Sometimes she will tell a reader that all she needs is some encouragement or point out a specific character that is giving her trouble. The editing and revision process has to be very meticulous.

“You have to get real about what kind of feedback you want,” she said. “If you are going to ask someone to give hard-earned time to something you are privately working on, you have to be thoughtful about it.”

LAST CALL
In 1994, the character Angela Chase, played by Claire Danes, walked onto the small screen and changed the trajectory of teen dramas, and, some say, an entire generation. Holzman created My So-Called Life with a small cast and crew and free filming locations. (Real students and teachers occupied the fictional Liberty High School during filming, so only certain parts of the building could be filmed.) The show ran from August 1994 until January 1995. It turned into the single season that has gone down in TV lore. It continues to appear on lists with titles such as “Best 100 Shows” and “Canceled Too Soon.” Fans, new and old, flock to IMDB message boards to comment on whether Angela’s mother Patty is mean or to compare the show to the other prematurely dumped teen favorite, Freaks and Geeks.

My So-Called Life was Holzman’s big-time entree to the show business world, but perhaps that world wasn’t quite ready for what she had to give. Despite critical acclaim and rabid viewership, the show was canceled in May 1995, and Holzman had to figure out what to do next.

“It wasn’t devastating. I might have been sad for a day or two because I would miss everyone, and I did have in mind some plans for the show. But I really came to a good place pretty quickly,” Holzman said.

Last October, in preparation for the opening of Choice, the Huntington hosted a screening of the pilot episode of My So-Called Life. The theater was packed with viewers – many of the age of those who had watched the series during its initial run – reliving the fragile and charged lives of Angela and her boyfriend Jordan Catalano (played by Jared Leto). Rewatching that episode in the current culture and political climate, the character’s problems and worries reach across a generation, perhaps all generations, and still ring true.

Before playing the episode, Holzman sat onstage with Boston’s local NPR radio host Robin Young to talk about the show. While discussing the hasty cancellation, Holzman had a dispassionate outlook, remarking that if the series had continued, the process could have been derailed or storylines could have gone astray. Instead, she said, one perfect 920-minute capsule will never be altered.

“I feel like it was perfect the way it was,” Holzman told the audience. “The perspective that I got back then was that it’s really important to define for yourself what is success. Did we express ourselves in a meaningful way? And that’s what I believe.”

In short, she didn’t miss a beat.

In a similar way to My So-Called Life, the theatrical work Choice takes a deep dive into emotional layers that can enhance and complicate a single choice. It’s a comedy about a serious topic, which is Holzman’s strong suit: slipping comedy into serious and sometimes controversial moments and scenes.

“I’m not really interested to write about a subject that’s deep and complex and intense without using comedy to some extent,” said Holzman. “Comedy is a huge, integral part of our lives. And it’s also something that makes us human. It’s too big to leave out.

“Comedy is not dessert. It’s not like, oh, let’s have a little comedy.”

Choice is about abortion. The particular choice central to the action has already been made, many decades ago, but it resurfaces in the relationships between a mother and daughter, and the mother and her friend. A prickly topic, to be certain, but Holzman doesn’t downplay the seriousness. Rather, she brings light to the humane and very real discussion of such experiences.

“To me, it’s very natural to put a very serious topic with comedy,” she said. “It’s not like I’m trivializing the subject, which people might think I mean when I say I put comedy with the subject of abortion. I think I give abortion a very deep look. And comedy is one of the tools that I use to do that.”

Holzman’s writing voice easily melds the two topics, and she’s consistent about writing what she likes.

“As an audience member, when I go to see something, what I’m most interested in is the play between the comic and the dramatic. That’s what I created in Choice, because that’s what I’m interested in seeing when I go to the theater,” said Holzman. “Wicked is a different thing. But it is similar in that it really has fun with light-hearted moments and wildly out there moments and dramatic moments.”

NEXT UP
After her turn on Boston’s theatrical scene, Holzman’s next project brings her back to TV. Last fall, she was working with Cameron Crowe and J. J. Abrams on a comedic project called Roadies, which will take a peek into the backstage operations of a touring rock band. The pilot has been picked up by Showtime.

In the meantime, Hulu is streaming all 19 episodes of My So-Called Life, giving an entirely new generation of viewers access to Holzman’s unique and candid style of writing.

Aubrey Everett is a writer and editor in the Boston area.

Lin-Manuel Miranda: Use your space

The curious Cuse of Bates Motel

Doug Wright: I am my own scribe