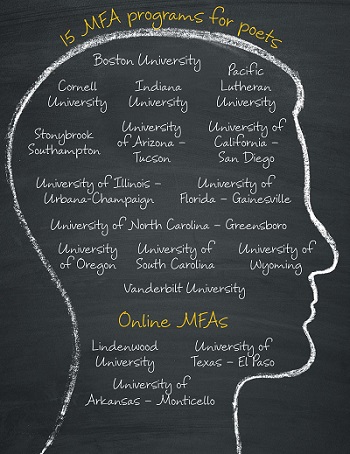 One of the most frustrating aspects in the life of a poet can be the lack of outlets to collaborate with peers or share work. Enrolling in an MFA program can help create a lifelong professional and personal network of colleagues, both those perfecting their craft and the professors leading the courses. Nurturing talents in a positive environment filled with like-minded people can also expand awareness of contemporary poets and trends in the field.

Dean Young, award-winning poet and professor at the University of Texas at Austin’s New Writers Project, says that an MFA program “is a place where the imagination is encouraged and fostered … where a beginning writer can test resolve surrounded by people who share the same commitment to an art which is largely (thankfully perhaps) ignored by the public.”

While nearly every university in the U.S. has an MFA program, not all are the right fit for poets. One way to evaluate a school is by looking at the distribution of professors. If the faculty scale tips more in the direction of fiction rather than poetry, consider another school. Also research the names of alumni and see if any notable poets have come out of that program. If so, it might be worth researching further.

When it comes to identifying the best MFA programs for poetry – for your poetry – the task can be overwhelming. Of course, there are the big names – the Iowa Writers’ Workshop, with its alumni of U.S. Poets Laureate and Pulitzer Prize winners. Despite its fame, Iowa takes in 25 new students each year, a relatively large number compared to other programs that only admit a handful because they offer tuition waivers.

Another heavy-hitter when it comes to poetry is Sarah Lawrence College outside of New York City. The school has an impressive group of professors, including 2014 Pulitzer Prize winner Vijay Seshadri, Matthea Harvey and Myla Goldberg. One of the biggest attractions of this MFA program is the amount of face time students get with faculty, thanks to bi-weekly one-on-one meetings to discuss the students’ work in depth. Sarah Lawrence also hosts the largest free poetry festival in New York.

Just down the Hudson, the MFA program at New York University is led by Pulitzer Prize and Kingsley Tufts Poetry Award winner Yusef Komunyakaa. Being in the heart of Manhattan puts students in the center of a poetry hotbed, with an endless calendar of readings, workshops and cultural events all within walking distance. NYU also offers a two-year low-residency MFA program in Paris, during which students meet twice yearly for 10 days at a time.

Low-residency programs like this one are on the rise, offering a much-needed balance for those whose life commitments prevent them from devoting themselves to full-time workshops. Without missing out on any of the benefits of getting an MFA, these programs follow a similar schedule of convening two or three times a year for an intense session of readings, meetings, classes and lectures. Outside of those short-term residencies, the rest of the workload is managed online with the guidance of an assigned mentor.

The idea of the low-residency program originated at Warren Wilson College, which has helped hone the talents of many poets, including Cornelius Eady. Meanwhile, the well-regarded MFA program at Vermont College of Fine Arts offers students three locations for biannual workshops: the campus in Montpelier, Vermont, Slovenia in the summer or Puerto Rico in the winter, giving writers a truly global experience.

Other institutions also offer overseas programs. The University of Nevada – Las Vegas nudges students to incorporate a more worldly view into their writing, so the school requires candidates to spend at least one semester in a non-English speaking country. It is also the only program that gives academic credit for joining the Peace Corps, and doing so also cuts the length of the program from three to two years. Taking the concept of studying abroad a step further, Cedar Crest College’s Pan-European MFA program consists of three international residencies over a two- or three-year period. The location rotates annually between Barcelona, Dublin and Vienna/Bratislava, giving students the opportunity to incorporate the sights, spirit and sounds of each place into their work.

Many programs offer tuition waivers, since the general theory is that one should not go into debt to get an MFA, a degree, which, according to Young, is not exactly essential. “It’s not about necessity,” he says. “The only necessity for a writer is to write. The benefits, though, can be enormous.”

Because of those waivers, many programs only accept a handful of students. The Writing Seminars at Johns Hopkins, for example, only lets in four new poets every year. This generous financial aid oftentimes comes hand in hand with teaching positions in undergraduate courses. Though the Johns Hopkins program has always been considered one of the best, it has been gaining more interest lately due to its roster of amazing faculty (among them Mary Jo Salter) and stellar list of alumni (including Phyllis Levin, Elizabeth Spires and Rosanna Warren).

One of the best-regarded MFA programs is the two-year residency at Hollins University, which is led by a stunning group of poets: Thorpe Moeckel, R.H.W. Dillard, Elizabeth Poliner, Cathryn Hankla and Jeanne Larsen. Since it is not a free program (tuition for 2014-15 is $20,446), the number of students accepted annually is larger than most at 24. Those who have gone through Hollins’ program include award-winning poets Adrian Blevins, Mary Ruefle and Scott Cairns.

There are plenty of smaller, up-and-coming MFA programs out there, including the one at Columbia College Chicago, which has 11 publishing outlets across both print and online, and Boise State University, home to student-run Ahsahta Press, which is making a name for itself among experimental poets and has published works by Stephanie Strickland and Rusty Morrison. Hunter College in New York City holds classes in the evenings and offers extraordinary access to some of the country’s biggest poets, including Donna Masini, Catherine Barnett, Sharon Olds and Anne Carson, plus the director of the program, Tom Sleigh. And don’t be surprised if you see Toni Morrison milling about.

Getting an MFA may not help poets get a book published and doesn’t guarantee a teaching position. But Young points out the degree’s biggest merit: “It is a message of a commitment to an art. Its accomplishments are those of the soul.”

Not ready for a master’s degree?

The University of Virginia offers undergraduates the Area Program in Poetry Writing, a major that requires 12 hours of upper-level courses in the craft, tailored seminars and a two-semester project during which a full-length manuscript is produced.

If you’re planning ahead for both a bachelor’s and a master’s degree, Penn State offers a combined program (in fact, the school no longer offers a stand-alone MFA). Requiring only one additional year of schooling, the BA-MA in poetry program boasts a two-to-one student/faculty ratio and alums including Geffrey Davis, Sheila Squillante and Lyrae Van Clief Stefanon.

Meredith Quinn is a graduate of New York University and former managing editor of The Writer.