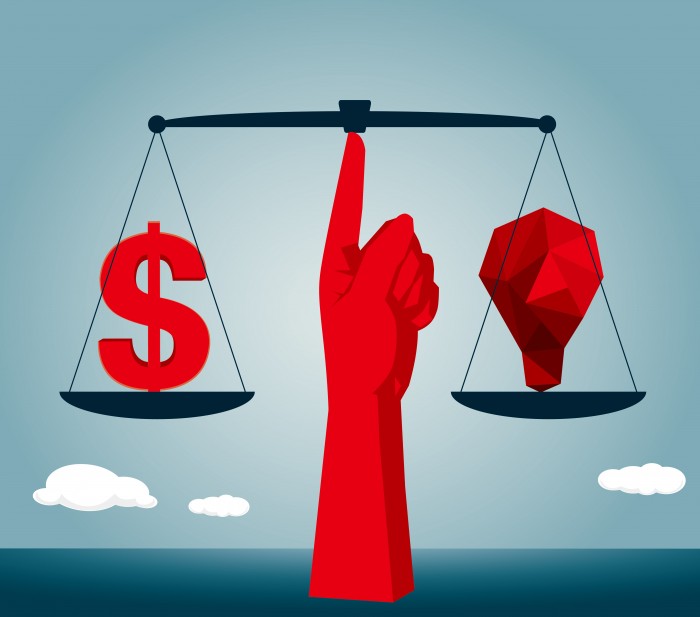 At the 2015 Association of Writers & Writing Programs conference, a group of college writing instructors sat behind a table in the front of a conference room, promising to give “straight talk” about MFA programs.

“We seduce, but what are we really promising?” asked the panel’s moderator, Lee Martin, Pulitzer Prize finalist for The Bright Forever and teacher in the MFA program at Ohio State University. Citing the statistic that fewer than one percent of creative writing program graduates have a shot of getting a full-time university teaching position, Martin asked his fellow panelists if the good outweighs the bad.

All of the panelists lauded the advantages of completing an MFA program, pointing to being around like-minded people, being introduced to fascinating books and learning the details of a craft so dear to their hearts. But one realistic disadvantage was mentioned by each panelist as well: money.

The true cost of an MFA program

It is true that some of the country’s best MFA programs offer tuition waivers and teaching assistantships, allowing students to pursue their art without incurring major debt. But for many students – panel members included – that concept is far-fetched. In fact, Doug Van Gundy, who attended a low-residency MFA program and now teaches at West Virginia Wesleyan, said that it didn’t even occur to him that he could get an MFA without paying for it. It took Van Gundy 12 years after graduation to get a full tenure job and in the meantime, he says, “I paid for [the degree] gladly doing everything else.”

On the contrary, panelist Carter Sickels attended the now-defunct fully funded three year program at Pennsylvania State University straight after finishing his undergraduate degree. Although he admits not knowing what an MFA was at the time or that one could major in creative writing, he applied to five schools and got accepted to two, opting for Penn State because it offered money. Sickels held a teaching position throughout his MFA program, but he did not continue to teach right away after graduation and instead facilitated workshops in New York City while writing short stories and two novels that, he says, “never went anywhere.”

Despite attending a fully-funded program, Sickels still faced financial difficulties after graduation, having ignored a professor’s suggestion to learn another skill during his MFA program. Sickels says, “I’m still hustling and cobbling things together to make a living.” Although he has managed to stay afloat by teaching, writing and consulting, Sickels points to downsides such as no health insurance and job security. Still, persistence pays off – Sickels has been nominated for multiple awards and won many scholarships, fellowships and grants, as well as the 2013 Lambda Literary Emerging Writer Award for his book The Evening Hour. And when asked if he would do the MFA again – even if he did have loans and massive debt to pay off – Sickels’ answer is yes.

The conversation then turned to the oversaturation of MFA graduates versus the number of full-time jobs available in academia, which, The New York Times reported the day before this panel assembled, is in part thanks to 229 MFA programs, a number that has tripled since 1994. Adjuncts, the freelance teaching positions that are standard at most colleges and universities, according to Van Gundy, are “not a problem of the MFA. They are a problem of the academy. Many of them have crushing debt and you basically keep them below the poverty line in order to maintain profit.”

But panelist Claire Vaye Watkins was quick to point out the silver linings – both of getting an MFA and of her semi-surreal MFA experience: landing a fully funded spot in a three-year program straight out of undergrad, securing a literary agent in her second year in the MFA program, winning a fellowship for a fourth year in the program and then immediately selling a book to a publisher before getting a tenure track job, which, in combination with her book advance, allowed her to pay off her student loans. “It’s a charmed path,” Watkins said at the panel. “It’s a mythic unicorn trajectory.”

Watkins put the onus on delivering an experience that warrants the MFA price tag solely on the university, saying, “While costs are concrete and real and frustrating, the benefits are often abstract.” She says that instead of playing up famous alumni names, those in positions of university power should be up front about the costs of getting an MFA. Watkins argued, “There is another model of value we should pay attention to and protect.”

Watkins, whose short story collection Battleborn won the Dylan Thomas Prize, also noted that artistic growth is not necessarily guaranteed in an MFA program, and yet interest on student loans is guaranteed.

While the debate of to MFA or not to MFA could possibly go on forever, Van Gundy does think that an MFA promises and delivers a few things: community, support in a solitary endeavor, others who take one’s work seriously, repeated rigorous re-evaluations of one’s work and exposure to books and writers one wouldn’t have found on his or her own.

If those promises sound enticing, then perhaps going for an MFA is right for you – and the rest will all fall into place.

Meredith Quinn is a graduate of New York University.