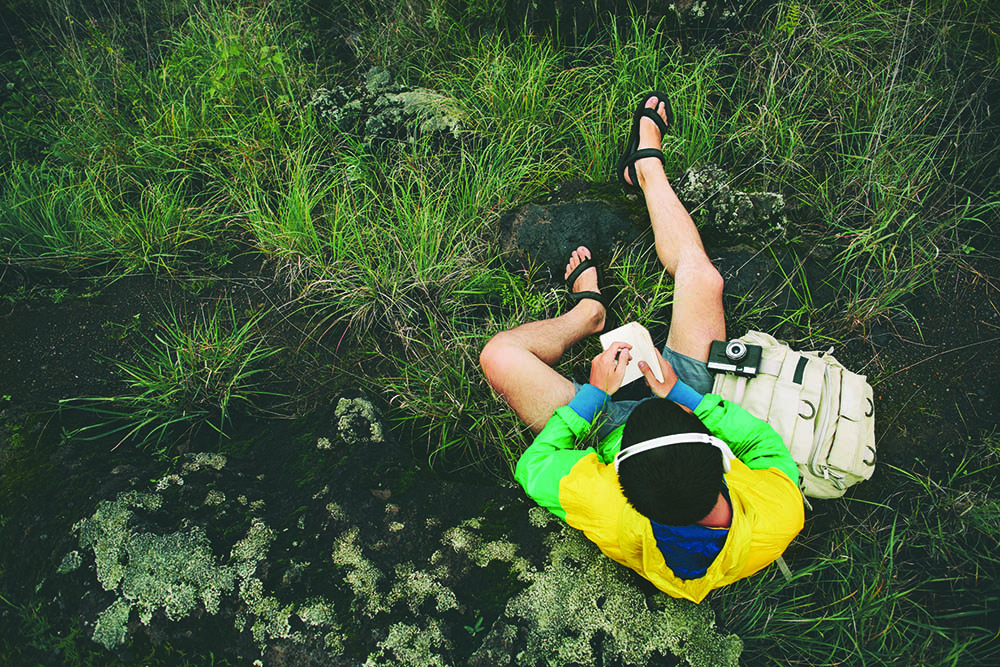 Feeling “lost in the wilderness” is not a state most writers want to find themselves in. But for the students in Eastern Oregon University’s Wilderness Writing Concentration, that’s the very idea.

A small school with 2000 on-campus students and another 2000 studying online, EOU is located four hours east of Portland, with a campus nestled in the Grande Ronde Valley between two mountain ranges: the Blue Mountains and the Wallowas. It made perfect sense to somehow incorporate the region’s natural beauty and history into EOU’s creative writing curriculum, says David Axelrod, co-director of the university’s low-residency Master of Fine Arts program.

With that goal in mind, Axelrod and his wife, Jodi Varon – both of them oft-published authors – created the Wilderness Writing Concentration, described on the school’s website as “the first hybrid MFA program to combine intensive instruction in creative writing with experiential wilderness retreats.”

The 60-credit-hour program requires students to spend four weeks in residence at EOU: two weeks in June and another two in October. At the present time, 15 students are enrolled in the Wilderness Writing program, and Axelrod says enrollment will cap out at 30.

“They’re in class all day. We have lectures, seminars, a service learning course, etc.,” he says of the on-campus residencies. “Then we do a mix of distance courses throughout the rest of the year.”

At the conclusion of the residencies, “students are expected to devote 25 hours of study and writing per week for the duration of the program, and should be skilled in the ability to remain focused and disciplined as they turn toward their solitary off-site work under the close supervision of faculty writing mentors,” instructs the EOU website.

But students should expect to spend plenty of time out of the classroom, too. “We take them into the field, into the mountains, weather permitting,” Axelrod says. “We did a river walk where I took people upstream, talking about the history of the river and the kind of human interactions that change the river, efforts by the tribes to rehabilitate the river, the effects of that, the future of the river, and its salmon run. We do things like that, and they write about it. Last fall, until a blizzard intervened, we were taking students up a canyon to look at [the results of a] catastrophic wildfire the year before. When we have a larger number of students to participate, we will probably take them into ‘alternative classrooms,’ into the wilderness, and stay in cabins or tents, and conduct our program in the wild.”

EOU is “trying to create an integrated vertical series of curricula that encourages young people to get outdoors, be in the mountains, learn about rivers and the indigenous culture, the history of the region, the biology, etc.,” he adds.

At first, most of the students who were attracted to the Wilderness Writing Concentration “came from the Portland area and were curious about Eastern Oregon,” Axelrod says. “Increasingly, we’re seeing students who are pursuing the MFA who are a little different, a little more working class. We have students who work in prisons – who want to start writing programs for prisoners – and people who are interested in regional agriculture to develop alternative agricultures, and then also older people who are near retirement who want to write. It’s a broad mix of people; it’s shifting a little bit.”

The basic idea behind launching the program, he continues, “was to bring poets, fiction writers, and nonfiction writers together in the nature writing aspect. But we want our students to have their writing informed by good research, by ideas and facts and not just their own speculation about things. We want it to be a little bit more intellectually unassailable than your typical treacly nature writing.”

Along with in-depth writing practice, “the Wilderness Writing Concentration includes four craft seminars focused on the study of wilderness and place-based literature, beginning with readings from ancient Vedic ecology and Native American narratives, the writing of Lewis & Clark and John Muir, American transcendentalists such as Thoreau and Emerson, and a particular focus on Melville’s Moby-Dick, leading up to an examination of more modern and contemporary practitioners such as Rachel Carson, Leslie Marmon Silko, Barry Lopez, Jon Krakauer, Cheryl Strayed, Rebecca Solnit, and others,” the website says.

“The kinds of attention that the scientists in our area practice are not unlike the kind of attention that writers pay to the world around them,” Axelrod says. “We have a very large and important research facility here, run by the Forest Service, and there are many biologists working there on a whole range of topics, both regionally and internationally, in South America, Africa, and Europe, as well as here. But they write for their colleagues, and their writing isn’t very interesting. We wanted to collaborate with them to bring people from the creative writing program to meet them, follow them in the field, to interview them, and start using some of that research as the basis for writing for a general audience.

“Over the decades that I’ve been here and my wife has been here, we recognize just how powerful the landscape is: the culture, the history, its indigenous people, a kind of guiding intelligence in our own work,” Axelrod says.

“We were very committed to trying to share that with people, to teach them how to access that kind of intelligence and how to use it. That’s what it’s about.”

Jeff Tamarkin is a freelance writer/editor. He lives in Hoboken, New Jersey, with his wife, novelist Caroline Leavitt.

Sign up for our newsletter full of tips, industry news, reviews, and much more.