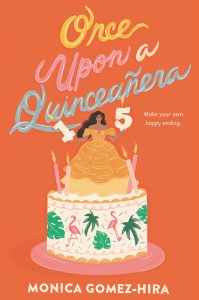 Monica Gomez-Hira, author of the young adult novel Once Upon a Quinceañera, can trace her sense of humor back to the childhood stories her parents and siblings told her about living in Colombia – stories that felt vital because she herself was born in the U.S.

“They loved to one-up each other, and their stories were often completely hilarious,” she says. “There was a lot of laughter in my family growing up. It was our way of handling the immigrant experience and what it was like to be in a new place. Humor was a safe way for us to decompress and to remember, ‘We’re all together, and we’ll get through this.’”

This is one of the messages she wants to impart in her debut novel, a rom-com about a Miami teenager, Carmen, stuck in a summer internship as a party princess while she attempts to avoid her charming ex-boyfriend and keep her cousin from ruining her own quinceañera.

Reports of anxiety and depression in young people have escalated during the pandemic. Therapists have worked overtime to mitigate the negative emotions brought on by fear and isolation during the worst months of COVID-19. According to a 2009 study conducted at the University of Sussex, just six minutes of reading for pleasure can reduce a person’s anxiety by two-thirds. Immersing oneself in the wealth of humorous kidlit published today can be a powerful tool to battle despondency. Bonus: many funny novels include deep dives into serious issues such as fear and depression, providing caregivers with safe entry into a discussion about difficult feelings in the young people they love.

“Humor is a great affirmation and a good reminder of the fact that we are more than the bad things that have happened to us or our trauma,” says Gomez-Hira. A fan of romance novels in her own adolescence, she didn’t intend to write a romantic comedy for young adults. But as the mother of a 16-year-old, she notes that teens are hilarious. “So often, they speak their minds, and they have a different way of seeing things that tickles my funny bone,” she says.

Humor is an important element between the two romantic characters, she explains. Their shared sense of humor adds depth to their relationship. The protagonist and her mother share a sense of humor as well, much like Gomez-Hira and her own daughter. “I wanted to write about how Carmen and her mom are so close, how they can be silly and laugh together because that’s the relationship I have with my daughter,” she says. “It’s so refreshing, and I wanted to celebrate this in the novel.” 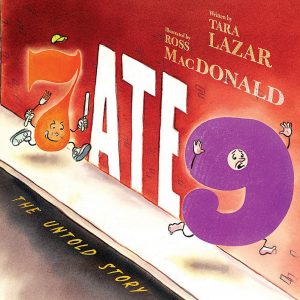 Picture book author Tara Lazar also credits a humorous parent – in her case, her father – for helping her to develop a sense of humor as a child. “My dad was really funny. He’d tell a joke, and then my brother and I would try to fire back a comeback right away, so I’m trained in comedy,” she explains. “I’ve always been a funny person. It comes easily to me.”

Her books include Three Ways to Trap a Leprechaun, Your First Day of Circus School, and her popular kids’ series that begins with 7 Ate 9: The Untold Story. “There are so many social issues that you have to deal with when you’re an adult,” Lazar says. “It’s OK just to have fun when you’re a kid.”

She has fun as an adult too. One of her favorite lines, from her picture book Little Red Gliding Hood, shows the image of a farmer on ice skates about to land on his tailbone. The text reads, “Old MacDonald slipped and fell. E-I-E-I-Ouch!”

Lazar believes humorous literature can encourage a great love of reading. “There are so many things competing for kids’ attention, right?,” she says. “If they’re going to pick up a book, you want to make it memorable, and you want them to have a good time.” 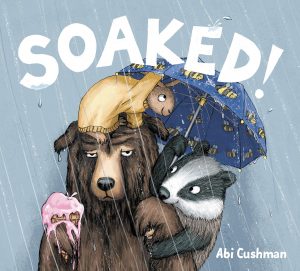 Author and illustrator Abi Cushman agrees. She’s the author of the forthcoming picture book Wombats are Pretty Weird, as well as Animals Go Vroom! and Soaked. The latter picture book follows a cranky bear who learns to have fun in the middle of a rainstorm, thanks to a hula-hooping moose and a badger with a bumblebee umbrella.

Cushman says humorous books for very young kids offer wonderful bonding opportunities. “Especially at the end of the day, when everyone’s tired, reading a book aloud is an easy way for families to just relax and laugh together,” she says. It’s also a way to process complicated emotions. “Even though Soaked is a book about a very soggy bear, and we’re laughing about it, it’s still actually a story about being grumpy and having a range of emotions and how to deal with a friend who’s in a grumpy mood,” she notes. 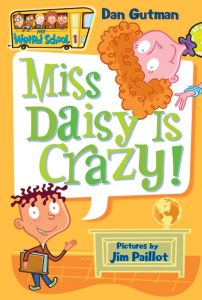 Dan Gutman, author of dozens of children’s books, puts it this way. “Watching a good movie or a good TV show or reading a good book takes you out of your current state and puts you in a different place for 30 minutes or a couple of hours,” he says. “You’re not thinking about your problems, and you’re less tuned into the pandemic or war or whatever.”

He relies on humor to propel kids off their screens and into the pages of his books, using witticisms like, “He should get the No Bell Prize for that idea. That’s a prize they give out to people who don’t have bells” and “I saw it with my own eyes! Well, it would be pretty hard to see something with somebody else’s eyes.”

Parents, teachers, librarians, and kids email him from all over the world to thank him for books like his humorous My Weird School series. “Reluctant readers who have a tough time getting into reading at all…if they open up a book and in the first couple of sentences there’s something that makes them chuckle, it’s going to have an impact,” Gutman says.