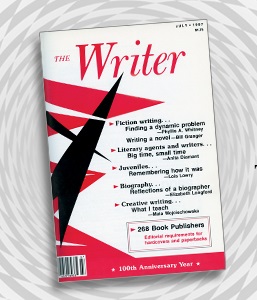 Lois Lowry hit her daughter once.

Just once, lightly, across the seat of her jeans with a wire coat hanger. Her daughter had taken a stack of freshly ironed-and-starched dresses and left them in a heap on her bedroom floor.

Years later, Lowry asked her daughter if she remembered the incident. “Remember it?” her daughter answered. “How could I not remember the time my own mother beat me unmercifully around the head and shoulders with a blunt instrument?”

“Memory, we should bear in mind, is a subjective thing,” Lowry tells readers in the July 1987 issue of The Writer.

But that doesn’t mean memory can’t be an essential tool when writing, especially when writing for children. Lowry admits she can’t remember names or appointment times, but each year of her childhood calls up very specific memories, and, more important, emotions: “Humiliation, at 4, caught stealing a crayon. Anger, at Allen, the boy across the street, who borrowed and lost my penguin book. Fear of the boy Gene, who terrorized the first grade.”

“For me it is all there, and I can call it back. If that were not so, I could not write for children,” Lowry writes.

The specific details are not as important as the feelings they evoke. Lowry’s daughter remembers the incident differently from her mother because as a child, what stands out is “the overwhelming and terrifying astonishment of being physically attacked by a usually pleasant, soft-spoken mother.” An adult remembers the scene through adult eyes, but Lowry reminds us that when writing for children, it’s imperative to tap into how a child sees things.

“In writing, it is not the veracity of the details that matter. As fiction writers, we lie about those anyway. The truth of the feelings is the only essential thing,” Lowry says.

But what happens if you don’t have Lowry’s impeccable memory? “If you do not, or cannot remember those feelings, don’t fake them,” Lowry advises. “They’re too strong, too powerful to be faked even by the best of tricksters at typewriters. And young readers are masters of phoniness-detection.”

Instead, she suggests using the emotions you feel as an adult. After all, adults experience embarrassment, pride and petty jealousy, too. Lowry recalls a “Wonder Woman” of a sister-in-law who seemed to have it all: “A hand-hooked rug, a newly papered room, a promotion in her professional field, a new and faster finish time in the Boston Marathon.”

Lowry used her envy to inspire a scene in a short story about 13-year-old Becky, who has just received a new dress, and Angela, her older sister.

“Well, you made yours. Not all of us can sew,” muttered Becky. Or sing, she thought, or cook, or play the piano, or get all A’s in school. Angrily, she listed her sister’s accomplishments in her mind. “Not all of us are perfect.”

Spinning memories into fiction may be helpful in more ways than one, Lowry points out.

Nicki Porter is an associate editor for The Writer.