Love from A to Z tells the story of Adam – he of the titular A – and Zayneb (she of the Z), teens who fall in love while pushing back against societal and familial expectations. As author S.K. Ali began crafting the book’s equally charming follow-up, Love from Mecca to Medina, she sometimes found herself unsure about minute details, like the ages of Adam and his sister when major events in their lives occurred.

Luckily, she found a very easy way to check her facts. The Adam and Zayneb fandom had her back. “[When I] couldn’t readily find this information in the first novel, I’d just ask in my Instagram Stories and, within a minute or two, I’d get answers with citations, like in an essay, from multiple sources,” she marvels. The reassurance soon gave way to a different feeling – trepidation. “It felt very heartwarming and, at the same time, a bit scary to realize that readers perhaps know these characters more than I do? (Hence, the slight anxiety I feel releasing Adam and Zayneb 2.0 into the world!)”

Writing a series can be like that. When a first book becomes beloved, revered, or, let’s face it, profitable enough to warrant a sequel, authors feel pressure to live up to the original. They also need to ensure the new book honors the previous one(s). While character development is desirable, readers still want the character to remain recognizable. And you can bet if the main character had a mole on their left cheek in the original, those readers will notice, and call you out, if that mole migrates to the right cheek in the sequel. Such tiny inconsistencies can distract from an otherwise stellar series.

Some authors find developing a system for maintaining consistency can help. Others go by feel or model their books on smashes of the past. Whatever option they choose, the key to writing a great series is knowing your characters and plotlines inside and out – while giving yourself the flexibility to modify things when needed. Here are four things to live by when writing a series, based on tips from middle grade and young adult authors who have been there.

Readers return to series because they love the characters. While a propulsive plot is also critical, your readers may lose interest if you mess too much with the characters.

Hena Khan has written three books in the Zara’s Rules series, a spinoff of her earlier Zayd Saleem Chasing the Dream series. Zara is a Muslim girl who serves as social secretary of the tween set in her neighborhood, leading the kids on fun adventures. Each volume explores different aspects of Zara’s family and her religion as she navigates a colossal misunderstanding that she always solves in the end.

Khan says there’s a sweet spot between endlessly repeating previous behaviors and evolving a character too quickly. “The thing I work on the hardest to maintain consistency from book to book is the characters’ voices and making sure their attitudes and jokes feel both fresh and familiar each time,” she says. “I think returning to characters you love and seeing the way they evolve is one of the things that makes series both comforting and exciting to readers.” For instance, in the first Zara’s Rules book, Zara feels threatened when a new girl, Naomi, moves into the neighborhood and begins suggesting her own games to the other kids. Zara and Naomi eventually become friends, and Naomi is featured as a protagonist rather than an antagonist in books two and three, showing off different facets of her personality. “The best part of writing a series is building a world and then getting to play with the same characters in different stories,” Khan says.

2. As the tension builds, don’t forget to break it

Jennifer Lynn Barnes, author of the hugely popular Inheritance Games ya series, has written multiple series – so many, in fact, that she actually created what she calls a “series writing survival guide, all the things I’ve learned about series writing over time.” She says one of the first things she considers as she plots out her books is the idea that every story has a backstory. That’s particularly important to remember for secondary characters. “In every individual book, I put characters through a lot of different situations. I force some traumatic things to happen to them. So in each book, I’m actually writing a slightly different character than the one I was writing who lived through the prior book. The longer the series goes, the more the character has lived through,” says Barnes.

She cautions that sometimes that collective buildup of trauma – the protagonist in Hawthorne has already lost her mother when the series begins, and she encounters life-threatening situations in every tome – can dampen the fun factor. It’s up to the author to bring it back. While serious themes are important, books should have some element of relaxation or relief to keep people from weeping so hard they can’t read. “For example, now that a character has been shot at and kidnapped and generally traumatized, I give them something wonderful, like falling in love or finding that place where they belong,” Barnes says.

3. Always know where a book in your YA series is going

You may not know what’s happening on page 37, 184, or 232, but you should know what’s happening on page one and the last page. Page one picks up after your previous book in the series; the last page launches you into the subsequent book or the thrilling conclusion of a three-novel conflict. Series should leave room for the future (and for incorporating new ideas you haven’t even percolated yet) while offering readers enough closure that they feel excited for the next book, not resentful that you left them hanging.

Having a structure or inspiration to crib from can help with ratcheting up the tension while staying on course. Poet Kwame Alexander knew from the get-go that he wanted to model his new trilogy, set in pre-colonial Ghana, after The Hunger Games, which he calls “one of the best books I’ve ever read for young readers.” The first volume of his trilogy, The Door of No Return, features similar chest-pounding, high-stakes moments as Games – and a clear through-line to the coming books. “Telling the saga of an African family ain’t gonna happen in 400 pages,” he says. “I knew this was not going to be one book.” He says that while he may not have known each thing that was going to happen during that saga, he had clear touchstones in mind. “Right now, I know exactly how book three starts and ends,” he says.

Maureen Johnson began her acclaimed YA series starring young detective Stevie Bell as a trilogy; she’s since written two standalone books. The author balanced both a historical and a modern-day mystery throughout the first three books, introducing enough red herrings to fill a kettle. As you might expect, that took some concentration to ensure she wasn’t contradicting herself from book to book. While an author rarely, say, resurrects a dead character accidentally, they might forget what a character’s favorite color is or whether their birthdate has previously been alluded to. Alas, readers don’t easily forgive inconsistencies.

How authors track those types of details varies widely. Some have editors or copy editors who create comprehensive bibles documenting everything in their universe. Others, like Ali, can crowdsource their questions to an audience eager to engage. Johnson has chosen to take a different route. “I have an obsessive love of planners, notebooks, and noteboards, so you would think the answer would be that I have a meticulous system. I do not,” she says. “I keep it in my head, and when in doubt, I keep a set of reference copies at my desk and will check. The universe isn’t so large that I need volumes of notes to track it all. I know Ellingham [Stevie’s school] and its inhabitants very well. For the individual books, I make complicated charts.”

Ultimately, how you approach YA series writing depends on finding the system that works best for you. Find ways to adopt these tips into your process, and your next book will please just as many readers as the last one (maybe even more).

Toni Fitzgerald is the copy editor for The Writer. She also writes about the media industry as a contributor to Forbes.com. tonifitz76.com 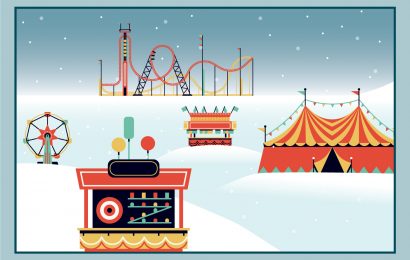 Add to FavoritesFor the resolution-makers, the goals of January beckon louder than a hall of carnival barkers. Surely this year will be the year, the … END_OF_DOCUMENT_TOKEN_TO_BE_REPLACED