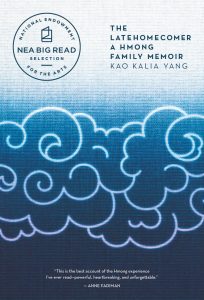 “I really deliberately picked this one because I think there are people who, number one, don’t know about Hmong people, [and number two], who wouldn’t necessarily classify them as Southeast Asian. [Ed. note: The Hmong ethnic group live mainly in south China, Laos, Vietnam, and Cambodia.] It’s one of my favorite memoirs, period, but it [also] tells a really important account of what it’s like for refugees who are not just from Southeast Asia but who are refugees within,” says Soriano. Soriano also praises Yang’s capacity to distill the Hmong history into lyrical, clear prose. “You don’t even really realize until it’s over that you just had a whole history lesson,” she says. “Read it for the extraordinary immersion and details. It just really transports you to another place. It’s very much about birthing and creating and raising life and surviving as they seek home.”