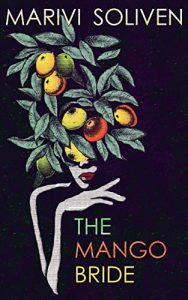 [Ed. note: Soliven’s 2013 debut novel has been optioned for film, and it is due to begin production this year; although the book itself is out of print, as of this writing, it was available on Kindle.] One of Soriano’s “favorite novels by a Filipino author, hands down…[is] a page-turner that’s laugh-out-loud funny at times [with] profound lessons about class, sexuality, gendered migration, colonization, white supremacy, and domestic violence.”

The novel tracks two women from opposite ends of the Filipino social spectrum as they immigrate to the United States: Amparo Guerrero is an exiled socialite, and Beverly Obejas is a waitress-turned-mail-order-bride. “Soliven’s craft is in full form in the way she portrays Amparo and Beverly as alter egos and mirror images of each other. They are both arguably the mango bride of the title, two women from opposite ends of the Philippine class hierarchy who end up in very different circumstances due to structural barriers and harms inflicted by the ruling class,” says Soriano. “It’s also in the way she weaves together the stories of different characters, including the housekeeper who opens the book, to show in a masterful way how each person’s fate is intertwined [with another’s].”