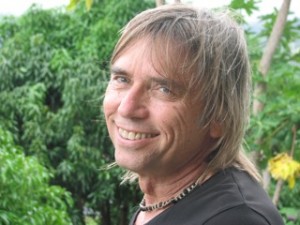 They Smell Like Horses
by Douglas Fetterly
(Honolulu, Hawaii)

She seemed out of place. Skinny little gal up at the bar. I didn’t pay much attention to her at first, except for the landscape between those tall, flashy Justin boots and the rugged, handsome cowboy etched into her short, brown suede skirt. I couldn’t tell if she belonged here in God’s country, but she seemed very much at home. Jake, the old bartender, was leaning on the bar a little askew, like bartenders do when they don’t want to face you dead-on. He was chatting up a storm with her as though they knew one another. I didn’t see how that was possible. She just looked too neat and tidy, like one of those slickers from the city. Still, they rambled on.

My attention turned to the painting on the wall above the bar. The cloud of dust in the picture seemed somehow real. The wranglers and the wild horses they were driving spoke of the cowboy world.

It was time to get some much-needed sleep. The six-hour drive from the coast tugged at my eyelids. I tipped my hat at Jake as I smiled on the way out. He grinned back as someone who had life by the tail. I knew he was going to be up late. He wasn’t riding tomorrow, so I guess he didn’t much care. I would be pushing trail dust by the time he woke up and had his first morning beer. I liked Jake. He was a character. I liked characters.

I bolted straight up in bed. Something had spooked the horses, and they had broken through the single rope fence. I could smell their fear as they upset the camp. But it didn’t fit. There was no camp. There were only the four knotty-pine walls of the ranch’s bunkhouse. Yet, my heart pumped as if it had been real, my fear imagining the dream as a premonition. I peered through the darkness at the other bunks. It was too dark to see, but I knew there were a few other fellas sound asleep, judging by the wheezing and breathing. I wondered if there were any cowgirls on this ride, though I was taking a break from women this trip. Horses and saddle leather were all I cared about. Still….

The late October chill was setting in. I pulled the bedroll tight up to my whiskers again and was soon fast asleep. Images of cowgirl boots, reins, and dust danced in my head until morning.

I couldn’t tell if morning came too soon or not soon enough. It had been a fitful sleep. These bunks weren’t made for someone over six feet. It was late for a cowboy, even a part-time cowboy like me. The instinctive ego knew this, as strips of sunlight warmed my bedroll. I didn’t waste any time, buckling my belt a moment later as I headed down the path to the chow house for breakfast. I wanted them to know I was no sleeping-in, urban genteel. Moving a herd of 120 loose horses across the Northern California high desert was no place for uptown city boys and Polo shirts.

“Slept in, did you?” I heard a voice say. My heart sank. It was only 7 a.m., I thought to myself. Still, I wanted their recognition. “Did you sleep well?” she said. This time I turned towards the voice. “Did you sleep ok?” she repeated. I realized I was staring at her. It was the same gal who was sitting at the bar last night. I must have smiled just then, for she smiled and shifted her weight, waiting to see who I was. I finally came to.

“Pretty well,” I said. “Dreamt a lot, though. Looking forward to the day. Eagerness kept me awake, I suppose.”

“It happens. Common, you might say. People come up here, looking for something they’ve lost, and they get all excited. Can’t sleep.”

I was about to introduce myself when a tall, sleek cowboy horned in, giving her a familiar hug. They walked outside. Fresh air, I’m sure. Another fantasy, ashes to ashes.

Breakfast was what I had expected, though they did make an effort to extend their hospitalities to a non-meat-eater like myself. I knew the food would be slippery, my having already met Charlie the cook. At 250+ pounds, with a two-gallon tin of vegetable oil at his side, I was sure he would see to it.

“Bacon?” the heavy-set fellow across from me asked, plate in hand. His Hawaiian floral shirt didn’t fit the picture, but he had a pleasant way about him. I imagined I would like him.

“No thank you,” I replied. I decided not to offer him my oatmeal or toast. “But thanks.”

He turned to the woman next to him and muttered something she seemed not to hear. They had that ‘unhappily married’ look about them. For a moment, I questioned if I had ever held that look. I knew the answer.

The clink of my heavy, off-white coffee cup brought me back to present. Bea, the waitress, was about to brim it with thick, heavy coffee. I made a quick move to cover the cup with my palm. Bea was an old pro at this. She never broke stride, never touched my cup with a drop of coffee, just moved to the woman sitting next to me. She canted her head in my direction, looking at my oatmeal.

“You must be one of the two vegetarians on this trip,” she said with a hint of dryness.

“That’s me,” I piped, not to be outdone. I wanted to tell her about the horses I once had, about the trail dust I had swallowed. But I didn’t.

She pointed at the other bowl of oatmeal. “You two should ride together, for moral support.” She laughed a good-natured laugh before disappearing into the kitchen. I decided I liked her after all.

I looked over at the other oatmeal, two seats to my right. The woman sitting behind it smiled warmly as though we were comrades. I winced a smile and returned to my instant oats, wondering, only slightly, who she was. I didn’t mean to appear unfriendly to her. That wasn’t my nature. It was just that there was something predator-like about her manner. I hurried at the task at hand.

In between bites, I took in the remaining riders. There was a shy young couple, perhaps in their mid twenties. They were quiet, the appearance of each other’s survival kit. They were in love. You could tell.

Next to them was a seasoned couple, forty, forty-two, I guessed. He had gray in his beard. She had on tight cowgirl jeans. She looked like she was used to them. Arizona, I thought I heard her say. Taxidermy I heard him say.

Bea bustled back through. Asked how everything was.

“Just fine,” I replied. There was nothing to be gained by a comparison of oats and cardboard. She moved towards the woman sitting next to me.

“You through?” Bea asked curtly.

“No,” the woman replied. “I’d like some more coffee, if possible.” Bea sauntered off.

There was something different about this woman. She had that ‘wise old soul’ look about her. And, like ‘Arizona,’ her jeans had earned that experienced cowgirl look. As she gazed out the window, I wondered where she had drifted to, what her story was. For that matter, what was my story? A lone, occasionally lonesome, cowboy. A cowboy at heart if not by trade. Was I running away? That thought spurred me into moving along, outside.

“Thanks, Bea,” I said with a smile as I squeezed past her. She had taken up a position near the head of the table, much as a Mother Superior might when keeping an eye on her girls.

“Good luck,” she said. “I’ll have a juicy steak waiting for ya when you get back.” She chuckled from deep down in her belly. A warm smile pulled at her cheeks.

As I turned to leave, I ran smack into the cowgirl who razzed me at sunrise. I had walked forward, looking backwards. We came together so close, so unexpectedly, that I found myself embarrassed, floundering for words. She laughed, an easy, cowgirl, hey-that-was-nice-let’s-do-it-again look in her eyes. I finally pulled it together enough to apologize.

“We never did introduce ourselves earlier. My name’s Jenny.” She extended a hand.

I wondered later how long I shook her hand. Her nametag, “Trail Boss,” was all I remembered.

Douglas Fetterly is a freelance writer and novelist with a passion for literature, love of adventure, and propensity for social consciousness in his stories. He has traveled extensively, including Russia, Africa, Europe, South Pacific, Mexico, and Asia. Living on or near the water most of his life—at times on a sailboat or houseboat north of San Francisco—helped him keep perspective through life’s trials. Interests include surfing, sailboat racing, backpacking, indie films, and guitar. Most days he can be found surfing with his wife at a variety of O`ahu surf breaks, or writing at a local café. He has enjoyed storytelling classes, dancing, singing in community choirs, and earned a Bachelor of Arts in English Literature.

My writing typically follows socially conscious themes, as with my novel Breach of Justice. Yet, there is a cowboy side to my life. As an experienced rider, I rode in a week-long cattle drive moving 600 head of cattle to their winter grounds in Northern California. In a similar vein, I helped move 120 loose horses from their distant outposts to the main ranch. This short story was prompted by a desire to capture vignettes of the sundry characters on one of those journeys.