One of the best pieces of fan mail Alexandra Diaz ever received came in the form of a thank you note from a young reader to his grandmother, which the woman then forwarded to her. “The child had written something along the lines of, ‘I really enjoyed this book, Grandma. It’s not a book I would have picked out for myself, but I’m telling all my teachers we should read it as a class.’”

The book was Diaz’s award-winning novel The Only Road (Simon & Schuster, 2016), the story of several young children forced, under threat of gang violence and death, to leave their families in Guatemala and make their way to the United States. It’s a book that School Library Journal called “an important, must-have addition to the growing body of literature with immigrant themes.” 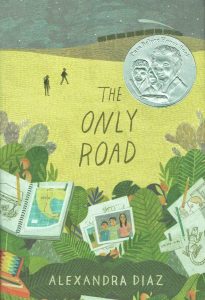 Diaz, a native Spanish speaker living in Santa Fe, is the daughter of Cuban refugees. The Only Road, and her related middle-grade novels The Crossroads and Santiago’s Road Home, focus on Central American and Mexican immigration.

“That’s what’s topical right now,” she says. “Some people may ask who I am to write a book about a child in an immigration detention center if I never went to one myself, but I believe if an author is capable of doing adequate research, it isn’t always essential to talk only about one’s own personal experience or one’s family’s personal experience.”

Diaz began writing at a young age and earned her MA in Writing for Young People from Bath Spa University based in England. She writes in her pajamas on the couch late at night. “I’m not a morning person,” she says. “Many times, I have to force myself to go to bed because my inspiration flows in the evening, leading toward middle of the night.”

She’s the author of seven books for middle-grade and young adult readers, including the New Mexico-Arizona Book Award finalists Of All the Stupid Things (Egmont USA, 2011) and Good Girls Don’t Lie (Leap, 2016).

She notes three books in particular that tell immigration stories effectively. One is Yuyi Morales’s picture book Dreamers (Neal Porter Books, 2018). “It’s a beautiful book about a mother and a baby and the immigration experience,” she says. She also appreciates Katherine Marsh’s middle-grade novel Nowhere Boy (Roaring Brook Press, 2018), about a 14-year-old Syrian refugee who loses his father and lives alone in Belgium before befriending a lonely boy from Washington, D.C.

“It’s important to know that the immigration experience is happening worldwide,” she explains. “Youth need to know that it’s not just happening somewhere far away. Immigration happens in your town, in your state, in your country.”

She admires Randa Abdel-Fattah’s young adult novel The Lines We Cross (Scholastic, 2017). “Abdel-Fattah writes both sides of the immigration story set in Australia,” Diaz says. “One protagonist is an Aussie who is very much a nationalist who thinks immigrants were here to destroy the world, and then there’s the girl he likes – a Muslim immigrant from Afghanistan.”

When she’s not writing, Diaz teaches circus arts – a job she’s held for six years. She shows both kids and adults how to hang from a trapeze, walk on stilts, perform on aerial silks, and do partner acrobatics. Pre-COVID, she and her co-workers visited public schools to impart their knowledge. “Sometimes I’d teach kids how to walk on stilts, and then I’d see them a year later as an author,” she says. “I’d tell them, ‘Now, I’m wearing a different hat.’”

Translations that influence the world

When her editor first suggested translating her novels into Spanish, Diaz panicked. “I never really learned Spanish grammar,” she explains. “I spoke it at home, and it was very conversational, but I never actually learned how to write it.” But then her mother, who lives 15 minutes away from Diaz, offered to help.

Initially, the partnership proved challenging. “My mother is really good at the grammar side of writing, but she’d translate long descriptive sentences into just a few words,” Diaz says. “I had to explain that words create an image in your mind that send you on a journey with your character. We talked about writing having a heart and soul, and how to translate not just the context of a sentence but the feeling as well.”

Though they live so close to each other, they edit with Google docs. “I give her the print version of the manuscript in English, and then I set up the Google doc for her so that she can translate that way,” Diaz explains.

Her mother was the first person Diaz called when she found out The Only Road had won the Pura Belpré Award – an honor presented to Latinx authors and illustrators for exemplary portrayal of Latinx cultural experience in children’s and young adult literature. After winning the award, she made a short video on YouTube explaining what it meant to her as an author. “I’m so pleased that this book can now go out and be read by a lot more children and hopefully make an influence in the world today,” she says. “It’s a huge honor.”

Diaz is a longtime member of the Society of Children’s Book Writers and Illustrators and advises anyone writing for young people to become a member as well. “This is an organization that can help you a lot in various stages of your writing career,” she notes. “They’ve done quite a lot of webinars during the pandemic, and they offer a lot of virtual assistance.”

She advises writers to take workshops and classes that will help them develop their craft. “For example, some people automatically know how to write dialogue, while others may get stuck and find their dialogue is very stilted,” she explains.

Diaz also suggests that writers read what interests them, studying objectively how authors have constructed character arc and tension and humor. “There’s no formula for how to write a book, and everyone works differently, so you have to figure out what works for you,” she says. “Don’t let others dictate what you can and can’t do in a story. Some people will try to put you down, but that’s their problem. Do what you can to be the best writer.”

Letting go of one’s ego is essential, she says. Writers need to allow and absorb feedback from beta readers with an open mind and a willingness to revise for clarity. “If three people read your manuscript and say they don’t know understand what’s going on in the story, then that’s an opportunity for you to look back at your writing with an eye for how to improve it,” she says.

To those authors interested in writing characters of a different race or ethnicity than their own, she says to do your research and write responsibly. “If you’re writing a story about a girl who finds a puppy, and the whole subject is about her trying to convince her parents to keep that puppy, then the focus is on the puppy and not on race. In something like that, I don’t think it matters if a person is a different race from what they’re writing. That’s not the focus. But if you’re talking about a heavy subject like racial discrimination, then I think you really have to tread very carefully. Someone who has not experienced that kind of discrimination wouldn’t understand how to make that character realistic and sympathetic.”

Still, she says, writing characters unlike ourselves shouldn’t be entirely off limits. “As writers, that’s what we do – we create worlds and fictional characters. There’s always a part of us in our characters, but that doesn’t mean every single thing our characters go through is what we went through,” she says. “Do your research, handle the situation appropriately, and don’t create stereotypes.”

Currently, Diaz is writing middle-grade historical fiction inspired by her parents’ immigration from Cuba to the United States. “It’s loosely based on what my mother and her family experienced leaving Cuba in 1960,” she says. “I’m working from stories they’ve told me.” She’s focusing on the characters and setting and plot, and then she plans to research archived newspapers in Miami to get a sense of how journalists approached Cuban immigration in that era.

“It’s important for people, youths and adults, to know what is happening to real humans today – the hardships and reality of their situation,” Diaz says. “For some people, the question to immigration is not a choice but rather it’s their only resort. I hope my stories are ones that readers can relate to who have had similar experiences and also offer awareness towards what millions of children around the world have experienced. At the end of the day, we’re all human and should be treated as such.”

—Melissa Hart is the author, most recently, of Better with Books: 500 Diverse Books to Ignite Empathy and Encourage Self-Acceptance in Tweens and Teens (Penguin/Random House, 2019). Twitter/Instagram: @WildMelissaHart