It’s safe to say that everyone faces that dreaded Medusa, awkwardness, on a daily basis. For example, Alexandra Petri forgot to bring a copy of her recently released book, A Field Guide to Awkward Silences, to a recent reading at the Harvard Book Store in Cambridge, Massachusetts, and nearly needed to borrow my copy. No trouble here, though – this is nothing for Petri, a self-proclaimed “connoisseur of awkwardness,” who has collected enough awkward experiences to fill a book (or two). Petri, a much-lauded columnist for the Washington Post, read excerpts from her handy Field Guide to a packed house. In the dimly lit book store basement minutes before the event, Petri and I spoke about her various projects. An edited and condensed version of our conversation follows.

You wrote a memoir, but you’re…how old?
Eight. I’m functionally 8.

Yeah! So why? Where did the idea come from to do a book?
I’ve always been a connoisseur of awkwardness. When my dad heard that I was writing this, he basically asked, “Why are you writing a memoir? You’re 12.” But it’s not a memoir. It’s an essay collection, and the whole point of it is that I’ve gone out and sought out these experiences. This isn’t just me saying: “And then I was born. I am David Copperfield, and here is my truth.” This is me saying, “I’ve gone out and done these specific things that I think you will find interesting.” I’ve been on Jeopardy!, and I’ve flopped spectacularly, and I’ve gone to a pun competition and I’ve won an international pun title, and I’ve gone to an international whistling convention and been mistaken for an actual whistling champion. These are all things that I feel like it either would occur to you to do, or not occur to you to do, but you might be curious to know how it went. So my hope was that in combining all these under the giant umbrella of awkwardness, I could produce something that people might enjoy reading at least as an inoculation against that kind of thing in real life.

What advice do you have for students looking to pursue careers in writing or the arts?
Try stuff. Read a lot. Befriend people. Don’t be afraid to look awkward. If you don’t know what’s in a brownie, don’t eat the brownie. Gosh, it’s no wonder these kinds of answers all sound the same. Eat the metaphorical brownie, not the literal brownie. Find people who like what you do and do it with them. Make things with your friends. If you have a crazy project that you’ve always wanted to do, now is a good time to try it, because just physically they’re all down the hall from you now. The logistics all become a lot more difficult the farther out you get, so try it now. If it works, you’ve got a thing, and if it doesn’t work, you had a time.

Who is your comedy-writing idol?
Oscar Wilde. I mean, Dorothy Parker to a certain extent, because she’s female and you’ve got to represent. But I definitely 100 percent read everything Oscar Wilde wrote during that formative phase. More good plays about Oscar Wilde definitely need to be written. 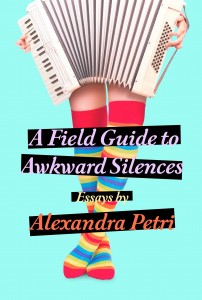 What is your writing process like?
First, someone asks me if I’ve written a book, and I say: “Why, yes I have. It is attached.” And then I won’t attach anything, and three years will pass. It’s a good way of lighting a fire under yourself to write things. But that’s a bad way, and you shouldn’t do that. There was a composer who once said something like, “I would have been Mozart if I had been able to find a good place to sit down and write that was free of distractions.” Walking around and trying to find a place that is the perfect writing area takes up a good 90 percent of my writing process time. In the back of my book, I thanked my parents, but I mostly thanked the coffee shop. A lot of coffee drinking and walking is my process. And reading. It’s easier to write when you’re reading.

What does the future hold for you as a writer?
I’d like to definitely keep writing more books – maybe try some fiction; that could be a fun time – or see what this brave new world of the TV has to offer. Or comic books – I would really like to write a comic book. I’m not even joking.

Jake Stepansky is a student at Harvard University and a blogger for the Harvard Arts Blog. His post appears here courtesy of the Office for the Arts at Harvard.