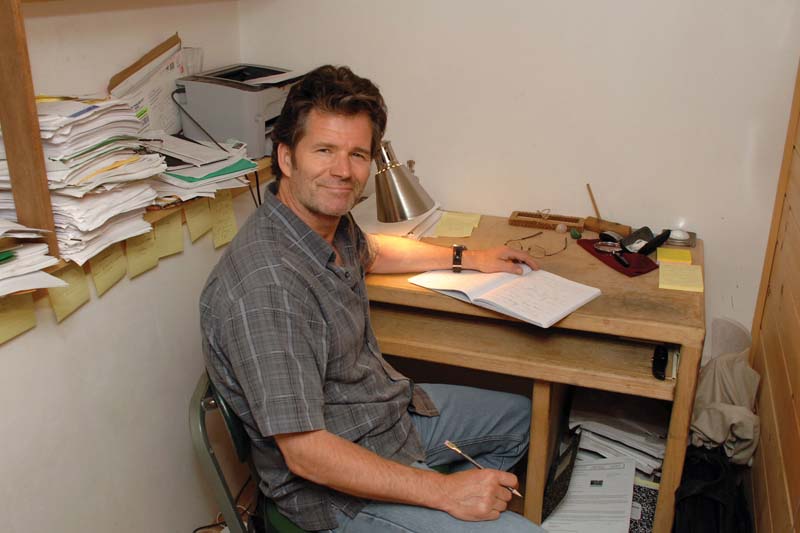 Not many enter the Cave, except author Andre Dubus III. Every morning, he descends 16 stairs, turns right, then left and up another steep dozen, a large cup of black French roast coffee in hand. He steps through a narrow doorway to a 5-by-11-foot room. Think large walk-in closet. He covers a tiny window to block out light. He sits down at a small table and switches on a desk lamp. No telephone. A silver laptop. Noise-canceling headphones on a hook. One – and only one – wide-ruled, marble composition book. And pencils, a few of them, to make verbal sparks fly.

Few writers have crossed literary genres as Andre Dubus III has. Roman numerals follow his name to distinguish him from his father, Andre Dubus II, the famed short fiction writer, master craftsman and writer’s writer. Dubus III recollected their bittersweet relationship – and his own precarious youth – in Townie, a heartfelt memoir published two years ago. Fiction, though, launched the younger Dubus’ writing career. The first short story he submitted to a magazine was published in Playboy and won the National Magazine Award in Fiction for 1985. He was 23. That story, “Forky,” is in his first book, The Cage Keeper and Other Stories. Four years later, Bluesman proved he could write a novel. His breakout success came six years afterwards with House of Sand and Fog, a bestseller that earned a National Book Award nomination, and that Hollywood turned into a screen hit with three Oscar nominations. Dubus followed with another novel, The Garden of Last Days, his astonishing take on 9/11. All the while, he continues to write essays, and he has completed an original screenplay. Dubus’ versatility appears boundless.

Now the author has published Dirty Love, four novellas under one cover. Two appeared earlier in literary journals; the others are newly written. Each captures slivers of lives in and around the Merrimack Valley in northeastern Massachusetts and coastal New Hampshire where Dubus grew up. While they are distinctly separate stories, each is subtly but unmistakably linked to the others. “One walks in the front door and out the back door of the other,” he says, smiling.

Recently, Dubus, 53, spoke outside the Cave in his commodious three-story house that his brother Jeb designed and that Dubus, with Jeb’s help, built over three years. Carpentry was one job he held in the past to pay the bills while he honed his writing skills. He also worked as a halfway house corrections counselor and a bartender. His wife, Fontaine, and their three children, Austin, 20, Ariadne, 17, and Elias, 16, respect the boundaries of the Cave, allowing him reflective time in his writer’s sanctuary.

Dubus approaches writing intuitively, without a plan in his head and never an outline. He once told a class he was teaching, “Just because you’re writing a novel, and you’re taking a novel-writing class, doesn’t mean that what you’re writing wants to be a novel.”

To him, writing is a mystery with signs and inner soundings he taps into. “You’re much closer to the dreaming side of your mind when you write,” he believes. “Dream, dream, dream it through. Write more with your body and less with your head. Don’t think a story through, don’t think it out. The danger of thinking it through is that most of us are not smart enough to do it that way. We have to go one moment at a time.”

Isolated in the Cave, he scrupulously follows specific rituals. He begins each writing day by reading a poem or two. “Poetry gets me in the mood, a more meditative state. It holds the bar high for me, and I try to stay at that level myself,” he says.

Then, while listening to music from a CD in his computer, he transcribes what he has composed in pencil the previous day. He’ll tweak, rewrite. But he won’t let himself get bogged down. Not now. The heavy lifting will come later.

Job done, he slips on noise-canceling earphones and drifts into dream-like silence. “I try to cooperate with what’s coming,” he says, “and I try to let my own ego and my own designs and desires fall away. I keep finding again and again it has a reality all its own.”

He insists on writing first drafts in pencil to stay close to the subject. Technology distances. Pencils, to him, are inviolate, low-tech, primitive. Until recently, he sharpened his Ticonderogas with a knife. Now he uses a compact sharpener to sharpen Blackwing 602s, which a filmmaker friend gave him. “I need to have flesh, blood, bone, wood, graphite, paper,” he says. “It has to be intimate. It has to do with intimacy with a character. I just feel closer with a pencil.”

And point of view? In a word, experiment.

“I experiment a lot with different sounds,” says Dubus. “Sometimes I write three pages or 25 pages or 50 pages. I try not to let fear rule the process too much – that I’m just wasting time. So what if you have to go back? You can always fix it. I’m really OK with totally destroying what I’ve started to see if I can find something more interesting and maybe a truer sound for the character and situation.” 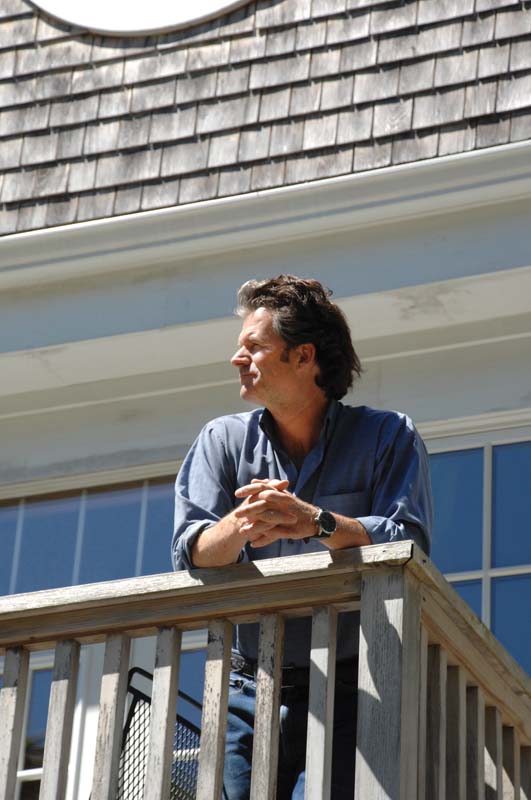 Sometimes he starts with an image. Consider the genesis of The Garden of Last Days. A wad of money on a dresser aroused his curiosity. Florida came to mind. An exotic dancer, 26-years-old. A daughter 3-years-old. Post 9/11. He had read articles about that horrible day and about the terrorists who, some accounts reported, had frequented strip clubs weeks before they unleashed their tragic plot. Dubus wondered: What would it be like to be one of the women who danced naked for these men? You would certainly have blood money in your bank account.

Dubus inched into the story. Classic story structure – beginning, middle, end – is the architecture that guides him. The notebooks filled. But he reached a point where he had to stop. “I just begin, and then I find I write myself into a corner of human experience about which I’m totally ignorant,” he says.

Writing paused for six months while he plowed into research. He read 33 books, including the Koran twice. He came to the point where he felt he could teach a class on Islamic extremism. Informed and enlightened, he finished the novel, which took five-and-a-half years to write.

Dubus never shares a work-in-progress with anyone: “No one. Ever.” It’s a deeply rooted superstition he has always had. “If somebody sees it before it’s done, he will see its flaws, point out what could be better, point out ‘Well, that’s been done before by so-and-so.’ It’s needlessly discouraging,” he says. “I’m afraid if I talk about what I’m working on, I’ll fall into the inclination to start making up this story, thinking it out instead of dreaming it, which to me, is very private.”

Novelist Tom Perrotta believes Dubus is a “great storyteller.” In an email from Los Angeles, where he was working on an HBO pilot of his latest novel, The Leftovers, he wrote: “I’ve long been aware of his skill as a raconteur, but Townie brought this aspect of his writing to a new level. You keep reading not only because of his mesmerizing voice, but because the incidents he’s describing are so astonishing. And there’s no sense of a writer showing off, either. His prose always feels completely natural and intimate.”

While Dubus concedes to using a laptop, he draws the line on other digital technology. He’s a Luddite when it comes to cyberspace. He begrudgingly emails out of necessity but has never texted, and never intends to. Increasingly at his public appearances, he notices people texting on their gadgets. At one reading, he called out a woman, scolding her in public and threatening to walk out. The crowd applauded. Now he warns his audience beforehand.

Distrust of the digital world is the subtext in Dirty Love. “I wanted to explore this whole digital generation which has been raised on it,” he says. Then, given his response to the texter in the audience, he adds: “I did not want to judge Devon [the protagonist] at all. I wanted to ask what it’s like if you have a soundtrack in your head all the time, and you’re totally in contact with people texting, and you’re on the computer screen at night. They’re not in this world with the rest of us.”

During the academic year, Dubus teaches writing at the University of Massachusetts-Lowell, where he’s an associate professor. He teaches two classes per semester, which frees up time for him to write. And yet, the intricacies of the process of writing can still be a mystery to this experienced writer and teacher. Why do stories visit some writers and not others? “What is not a mystery,” he says, “is that there are tools that can be learned that will help a writer get more deeply into his or her imagination where the stories lie. For example, concrete language versus abstract language, specific word choices, action verbs, point of view. All these tools can be taught.”

However, Dubus frowns on writers’ groups, believing they lead members astray from the work at hand. His father told him that a novelist is like a whale submerged in the ocean. You’re down there alone, and you’re supposed to be down there alone.

“It makes us face our own mortality,” he says. “Working alone on a 300-to-400-page project for five years all by yourself brings you right to the starkness of coming into the world alone and leaving alone, as we do.

Robert G. Pushkar is a Boston-based writer and photographer whose work has appeared in local, regional and national publications.