Writer Clare Beams received significant recognition and acclaim for her 2016 short story collection We Show What We Have Learned, including nominations for the PEN/Robert W. Bingham Prize for Debut Fiction and the Shirley Jackson Award for a Single-Author Collection. With her first novel, The Illness Lesson, she demonstrates that she is equally talented at longform fiction. Set in the 1870s, this imaginative, insightful story stars a young woman named Caroline Hood, whose father, Samuel, decides to found an unusual school for girls on the same site where he once formed a failed utopian community. But when a mysterious illness plagues the students, Samuel turns to sinister Dr. Hawkins for a bizarre medical treatment (based on a real historic treatment). Beautiful, evocative prose and a thought-provoking plot make this a book that stays with you long after you finish reading it. 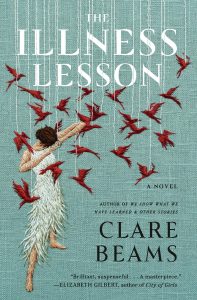 Dialogue is always a challenge for me, especially if it’s a piece set in a historical time. I don’t want people to sound like set pieces, but I do want them to sound convincing of that time. I have to read my dialogue many times to see if it has life in it. With The Illness Lesson, the character of Samuel just clicked for me, and there were ways I had a sense that dialogue would be important for him because he’s happiest when he’s proclaiming. I did many drafts to make sure it sounded right and had life.

I find novels harder to write, although both forms have their challenges. Short stories are not forgiving if you reach the end, and you don’t get that perfect ending. Novels leave more space for messiness that doesn’t tie up perfectly. With a novel, everything you change has repercussions for the entire thing. That’s also true with a short story, but there aren’t as many changes to recalibrate. I try to approach it in ways that make it manageable, structuring chapters so they have a little bit of a story arc. But then I go back and make changes, so it doesn’t feel like the same rhythm every chapter.

I never know everything when I start. I had a sense of the characters Samuel and Hawkins, but Caroline had to grow into who she was over the course of the writing. I had some sense of the secondary characters – but really I start with an image and an idea, and they overlap. I had been to see Fruitlands, Bronson Alcott’s failed utopian community, and I found the contradictions in that time period to be interesting. Some of the thinking was genuinely beautiful, but it didn’t include everyone. That led to an idea about women and the blindness to women’s lives, and I also had this image of red birds – and I started to play with them together.

I don’t call it historical fiction. I have an aversion to that. I don’t want to get it wrong, but that’s where the engine is for me. I try to make sure I haven’t included anything that’s wrong, with the knowledge that there will probably be some things that are wrong. But I try to make it as minimal as possible. I love researching, and I tend to write and then dive into research while I’m working.

I tend to try to touch my current projects as many days of the week as I can, but it doesn’t amount to every single day. If I’m working on a longer project, it’s helpful to keep my finger in it so when I come back for rewriting, I don’t have to spend a long time getting back under it. I also found that it’s helpful not to work at home, so I write at a coworking space.