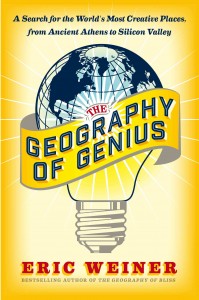 Eric Weiner’s book The Geography of Genius examines the flourishing of creative genius in certain places at certain times in history. Ancient Athens for thinkers, Renaissance Florence for art, Vienna for music and Silicon Valley for techies are all his topics. His previous book, the best-selling The Geography of Bliss, was about the world’s happiest countries. A former National Public Radio foreign correspondent, he’s known for his mordant wit.

Where do your ideas come from?

Many ideas come to me when I’m traveling. There is something about getting out of my everyday surroundings that unshackles ideas. Maybe it’s my relatively clutter-free existence on the road, or the exposure to foreign peoples and ideas. Henry Miller said, “One’s destination is never a place but a new way of seeing things.”

What has writing on “genius clusters” taught you about creativity?

Creative geniuses don’t appear randomly, but in groupings, almost always in cities, which provide the stimulation, resources (usually money and patronage) and opportunity for interaction with like-minded people. But they’re only welcoming up to a point. They tend to be competitive places. I think a degree of friction is essential. Creativity is largely a response to a challenge. Change your place, I believe, and you can change your life.

What’s the most important lesson you’ve learned about writing, especially since you came from radio?

Working for NPR made me a better writer. Radio forces you to cut to the essence of a story. You have to grab them from the first second and not let go.

—Sharon McDonnell is a freelance travel writer in San Francisco.