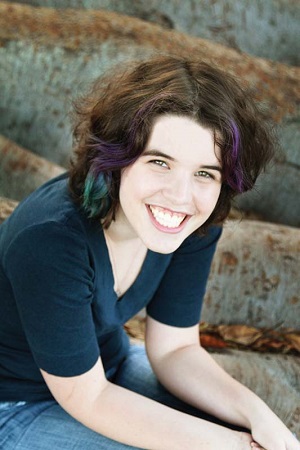 Despite what you see in bookstores, YA novels are not all teen paranormal romances and clever or not-so-clever twists on Twilight. That ship hasn’t yet sailed, but it is by no means the only ship in the harbor. What many teens seek in YA novels are edgy topics – controversial ones such as self injury, depression, sexuality, grief, traumatic events – without the typical After School Special lessons of old, without PSAs such as: “Kids, if you’re depressed, talk to a parent, teacher or school counselor, and it will all be OK.” If there’s a “The More You Know” segment on TV, most teens roll their eyes. They don’t want trite “clean-ups” in novels. They know life is messier than that.

It could be that teens are more “A” than “Y.” They think and often speak more like adults than stereotypical teens, and a standout YA novel gives them a more profound voice and room to swerve in their decision-making. This is the approach of 22-year-old Hannah Moskowitz, who landed several YA book deals when she herself was a teenager and wrote successful books while an undergraduate at the University of Maryland.

At age 19, she burst onto the scene with the cringe-inducing book Break, about a boy whose goal is to break every bone in his body, under the belief that what breaks grows back stronger: “It’s sort of a natural bionics thing. Break a leg, grow a better leg. Break a body, grow a better body.” This tale gives a macabre twist to the emotional issue of self-inflicted pain and family dysfunction. It established Moskowitz’s credentials with YA readers and won her a spot on the American Library Association’s 2010 list of Popular Paperbacks for Young Adults.

“What makes Moskowitz unique isn’t dialogue or plot twists,” says Booklist reviewer and author Daniel Kraus. “It’s her utter commitment to her voice. She has a point of view, a style, and she pounds away at it, page after page. Even when it doesn’t work, it’s fascinating to watch. You could even say it’s a form of tunnel vision in a way, and I’m a big fan of that. Forget what the rest of the world is doing, forget about repeating yourself, forget about embarrassing yourself. Just do what you do as hard as you can do it. The issues she tackles are far less important to me than how she tackles them.”

Moskowitz’s upcoming book Scrapbook, which is about prostitution, forced her to switch agents because of the controversial topic. It’s the seventh book she has written since she was 16. You may be thinking her success comes from being close to the age of her protagonists – and that may be true on one level. But other YA writers can adapt her methods to help establish authenticity – and even edginess – in their works.

Hannah Moskowitz on writing YA novels

HM: “I like to look at situations and think, ‘What is the predictable response?’ and then I do the opposite. But the characters’ motivations have to make sense.”
TAKEAWAY: Don’t throw in a twist that isn’t organic to the character.

HM: “With Break, I thought ‘Why would someone ever do that?’ I have that answer in mind before I write it. I know the end point at the start, so there’s no putting a topic on top of the characters and making them deal with it.”
TAKEAWAY: Understand your character and the depths of the issues he or she faces.

HM: “I write the first draft straight through, sometimes in just a few days. In the first draft, I try not to change where I’m going, and I really like to play with my characters. Everyone starts out without much of a personality, and then I get to use relationships and the way they talk to each other to get a better idea of what they’re really like. In next drafts, I end up turning up the volume on a lot of traits so they’re just louder versions of their unsure selves from draft one.”
TAKEAWAY:Develop characters in stages, layering them as you get to know them.

HM: “For Gone, Gone, Gone, I knew I wanted to use the real 9/11 and sniper attacks, not make up a random terrorist attack, to make it more real.”
TAKEAWAY: Consider setting your YA character in the midst of historical events for authenticity.

HM: “To capture my characters’ voices, I could use the ‘I’m really young’ excuse. But when you talk to teenagers, which I advise, you’ll see that they don’t respond directly to what’s just been said by someone else. They respond to a comment that happened three comments ago. They talk over each other.”
TAKEAWAY: To create realistic YA dialogue, view YouTube videos that teens post.

HM: “Avoid overusing slang. It doesn’t have as much impact as the way they talk.”
TAKEAWAY: Moskowitz watched the TV show My So-Called Life, which she says captured realistic teen mannerisms. Find a current TV show targeting teens and watch it.

HM: “I have one book where the couple gets together at the end. In reality, these couples are not going to stay together.”
TAKEAWAY:Avoid neat wrap-ups at the end of a YA story.

HM: “I did boys’ points of view because I was not able to connect with the girl characters as much.”
TAKEAWAY: Try both male and female POVs to determine which voice achieves more depth and authenticity in the story.

In Break, Hannah Moskowitz focuses on Jonah as a series of “accidents” shatter his body – while his friend Naomi films the trauma. It approaches issues head on, and yet also establishes a realistic tenderness toward characters. It also eschews a pervasive problem with many teen books, which, Kraus says, is to be too “on-the-nose.”

“You feel like you’re reading a well-meaning pamphlet,” he says. “This is the case with so many issue books, and it’s one of the things Moskowitz excels at [avoiding]. She has a gut instinct for graceful metaphor. I don’t see this so much as edgy as it is the mark of a writer with something genuine to say. There’s a lot of indistinguishable pap out there, so anytime someone shows up with a real voice, that alone feels a bit edgy.”

As for the gut instinct for graceful metaphor, consider this passage, in which the lead character Jonah talks about his love interest:

She puts my heart in a microwave and watches as it warms up and explodes. When I’m around her, my blood runs hot and thick. It’s beautiful. You could say there’s nothing special about her. You could make the case. But, really, she’s special because nobody else can do the microwave thing.

In Invincible Summer, Moskowitz weaves a tale of brothers competing for the proverbial girl next door, mixed in with the challenges of having a deaf younger brother and parents on the verge of divorce. It’s “engrossing, messy, complex and real,” says Lauren Strasnick, author of the YA romance Nothing Like You.

Like a teen’s room, and that awful stew of multiple identity-shaking issues, messy is what makes edgy topics in a YA novel work well. Nothing has defined edges or a single interpretation, not even defined by the protagonist who often sees his circumstances through a kaleidoscope of teen confusion.

Moskowitz doesn’t dull down the corners of her plots, dialogue or characters, who sometimes speak with extreme insensitivity, unfiltered knee-jerk barbs and gut-wrenching revelations of how they feel the world should work. “When you’re grieving, the times you’re happy are so much more tragic than the times that you aren’t,” says one of the brothers. “Because being happy feels fake and it feels temporary and it feels meaningless. And hating being happy is a shitty way to live.”

In Gone, Gone, Gone, the lead character grapples with his attraction to another boy – a cancer survivor – in the aftermath of 9/11 and the 2002 Beltway Sniper shootings in Washington, D.C.

“A lot of YA protagonists seem to exist outside of history,” says Kraus. “To their minds, their birthdays were the beginning of time, and they are the centers of the universe. The popular sentiment is that this is how teens think, and I get that, but I don’t really believe it. We are inextricably shaped from day one by historical events, young people probably most of all. In GGG, Moskowitz understands that. There’s nothing [her characters] can do about being part of history. Global forces beyond protagonist control have always been classic fodder for tragic love stories.”

Sharon Naylor is a freelance writer.

*This article originally appeared in the November 2013 issue of The Writer.

Our  profile of National Book Award-winning YA author Jacqueline Woodson

Tips for breaking into the YA market