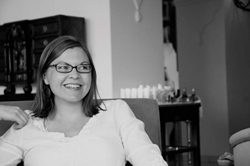 In 2004, Karen Thompson Walker read that the big earthquake in Indonesia shortened the earth’s rotation by a few microseconds. This news story inspired what became The Age of Miracles, her bestselling first novel, although with one major difference: Julia, an 11-year-old girl, and her parents face the effect of the earth’s slowing rotation and the lengthening of its days. That change makes for a haunting coming-of-age tale that landed Miracles on several best-of-the-year lists. Walker attended Columbia University’s MFA program and has worked in journalism and book publishing. She wrote part of the novel on the subway en route to her day job. Originally from San Diego, she now lives with her husband in Iowa City, Iowa.

Why: Writing has become for me a type of meditation, that hour or two that I spend in the mornings every day. I wouldn’t want to give that up even if I couldn’t publish books or I had never sold my book. The calmness and level of concentration that I have when I’m writing, that in itself is enjoyable.

Developing the idea: When I first sat down to write [The Age of Miracles], I had the voice of a woman looking back on her childhood. There’s a built-in nostalgia to that voice that seemed right not just for a story about childhood but also for a story about the whole earth being in peril and certain things about our daily life falling away. From there, I tried to follow the logic of the premise and let that guide me. As I was writing this book, I kept up with the news. I pulled new details any time there was a study that had to do with growing plants in greenhouses or human circadian rhythms or even the way people reacted to the global financial crisis, and the fear and the panic related to that.

Research: I did most of it as I wrote the story. I was always trying to balance how much scientific detail I should include versus how much of the details of [Julia’s] daily life. As a question would occur to me ‒ like “At what point would the grass have trouble growing, because the nights are getting longer?” ‒ I would do research, mostly online. After I sold my book, I showed it to an astrophysicist. I was relieved by how much he said was based in real science, how much of it I had understood or had managed to finesse.

Process: I like to write one sentence and then rearrange it five times. And then I write the next sentence. And I don’t like to move on from a sentence or a paragraph or definitely a section if it feels rough to me. To be able to see what I have, I feel the need to revise heavily as I go.

Work history: I worked for a year for this small newspaper, and a lot of what I did was profiles of local people. It was fun to try to capture these characters on paper, and figure out what details about a person’s house or about how they dress or their interests can reveal who they are. As a [book] editor, my sentences got sharper when I was in the practice of editing other people’s sentences.

Influences: The Virgin Suicides. It was exciting to me to see how a whole novel could be written about ordinary life but through this angle that made it seem extraordinary. The Roadby Cormac McCarthy and Blindness by José Saramago. I liked how both were these big disaster stories, but, unlike Hollywood disaster movies, they were interested in the psychological details of the characters.

Advice: Sam Lipsyte recommended thinking of your writing career and your publishing career as separate. That way, if you’re having trouble getting your stories published, you can focus on becoming a better writer. Just have the persistence, the diligence and the patience to keep writing.

Sarah C. Lange is a freelance writer and editor in Milwaukee.