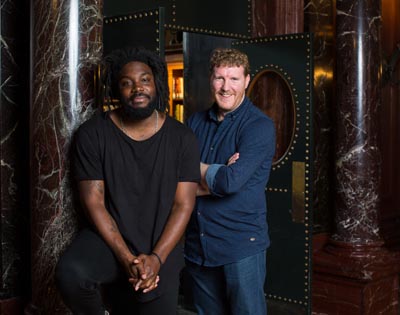 Jason Reynolds and Brendan Kiely, who were featured in the January 2016 issue of The Writer, have received the inaugural Walter Dean Myers Award for outstanding children’s literature in the YA category for their jointly written novel All American Boys. “The Walter” is administered by We Need Diverse Books, which addresses the lack of diversity in children’s literature. Kiely and Reynolds met in 2014 when Simon and Schuster sent the two first-time authors on tour together. That summer, while they traveled the country, police brutality dominated the news, and the authors started talking through the issues. They felt they had a duty to respond, so they wrote All American Boys, the story of two high school boys – Rashad, who’s black, and Quinn, who’s white – who get tangled up in a police brutality incident. In the process of writing, the men’s friendship grew, and they learned about sharing the craft of writing – as well as humility, grace and courage – from each other.

TW: What was the most inspiring part of writing this book for you?
JR: I wrote Rashad’s half, which was the story of the victim, and I think that was a story that everyone, including myself, feels like they know very well, and therefore, I was more interested in what Brendan was going to do. The whole country knows the character of Rashad. The whole country has seen what has been happening with young people of color being brutalized by police officers. What we don’t talk about enough is the story of the Quinns of the world and how they’re processing and dealing and where they stand in the midst of all these things. If nothing more, I was more inspired by Brendan’s courage and by his articulation of a very complicated thing. It’s easy to talk about the victim. It’s harder to talk about all the other people around who may or may not be complicit.

TW: Where there any bumps in the road that came up in the writing process?
BK: No. Everybody wants that to be the case, but it just isn’t. The process of mimicking reality really made it easy to not have as many possible conflicts. What I mean is, just as in too many cities in America, you have people living side by side, but they are living such different stories. Our book mimics that reality so we avoided a lot of pitfalls by just being honest to the communities that we were writing about. Each community has its things to celebrate, and so too do the different voices we write in. I don’t have to pretend I know Rashad’s neighborhood and Jason doesn’t have to pretend he knows Quinn’s family. We can just do it honestly and authentically. And then, because the two stories are bound together in the same book, it’s a mirror for some readers – either narrative will be – and it’s a window for some readers – either narrative will be – and it’s also a doorway into the conversation between those communities and those two characters.

TW: Did you have any issues getting the book published?
JR: We wrote the book in secrecy. Our agents didn’t know; nobody knew until it was complete. We finished the novel and then presented it to our agents and the book was sold in like three days. But had we not done it that way, there might have been issues. It’s a heavy topic, and if it goes wrong, if we do it poorly, it could be a major hit to our careers. So it was our job to do our due diligence to make sure we were the obvious choice. If we’re going to do this thing, we’re going to do it 100 percent, and then if they deny us they are fools.

BK: Hats off to Simon and Schuster. They went with it and they backed it 100 percent and they’re not shying away from the real difficulty of the book, which is police brutality, individual racism and bigotry, and systematic racism.

TW: How was the revision process for this novel different than writing alone?
JR: The biggest difference was we didn’t have time because they fast-tracked the book. So on your revision passes, you’d have 10 days instead of a normal two to three months. But the flip side was, we only had half a book each.

BK: The final round of copy edits was finished at the end of July, and the book was already available in September. It’s crazy how quickly this process came together.

JR: That’s also why we have to give hats off to our editor Caitlyn Dlouhy, because fast-tracking a book can be really, really dangerous. You can miss things, because everything is moving so quickly. But Caitlin and her delegation made sure that we closed up every gap.

TW: Why do you think first-person point of view works so well for YA fiction?
JR: First person is amazing for immediacy and for building a visceral tangibility. You can’t be at a distance of a person who is talking to you in a natural voice. There is no omniscient narrator, no untouchable voice. This is a tangible voice and it’s speaking directly to you, so you can’t turn away.

BK: I think it’s also true that more and more adult literature for the past decade has been dominated by first-person storytelling, and I would credit David Sedaris and Candace Bushnell for reinventing what it means to do literature. What they did was tell stories in a voice that could not be ignored. I think that’s what dominates all literature, and I wouldn’t make a distinction between YA and adult.

TW: How do you decide how much slang to include in the dialogue you write?
JR: For me, as a person of the African American community in an urban setting, I think slang is extremely important because it’s important culturally to the community for many reasons, one of which is the notion of code-switching, of coded language. Slang has always been a way for us to say things without anyone understanding them. I don’t necessarily mind if the slang is defunct. I know people are always like, “What happens if this is no longer relevant?” Well, then I think it time-stamps the book in a powerful way. You can’t overuse it because then if becomes sort of buffoonery, but I think it’s always helpful to use some. It colors the work a bit. It adds some edge and some oomph.

TW: What are your tips for forming dialogue?
JR: Dialogue is interesting because it seems like it’s so difficult to write for so many people, but for me it’s all about being specific and being detailed in that which is natural. I think people have a hard time doing that because it seems really stupid, but it is also the thing that can jump off the page. So like, if I’m writing this sentence right here, I would write, “So, like.” Everybody is like, “You can’t put that in there because it sounds silly,” but to the human mind, when it reads it, it sounds familiar.

BK: I agree. The number one skill any writer can cultivate is listening. You want to be a listener so you hear what people are saying and hold onto it so you can recognize their reality as much as possible, but also as a writer to use that in your work, dialogue included.

TW: How do you walk the fine line between including a message in your book and being too heavy-handed?
BK: I spend a lot of time writing the message out first, so I know what I’m trying to say. If I just leave it in my mind and I haven’t made it reality in writing yet, I’m not sure I’ve fully thought through the idea. I’ve got to get it out first and then rewrite it. It’s not that I’m trying to mask the message; it’s more that I’m trying to be authentic to how we actually communicate. In everyday hanging out, nobody is like, “I’m going to present you this agenda and you’re going to listen for half an hour and then present your rebuttal.” So I may begin like that, and then make it more human.

TW: What was your relationship to reading and writing like as a kid?
BK: When I was in elementary school and middle school, I didn’t really read. I couldn’t get into it. But going into high school, I was assigned all of this summer reading, and I was really nervous going into a new school. I felt like I had to do some work. One of the books I had to read was the first in the Lord of the Rings trilogy. What a brilliant idea, whosever idea it was to put that on the list, because holy crap I was so invested. Over summer vacation, I read all three of those books. That got me into it.

JR: For me, no reading, no reading, no reading. Back then, in the ’80s and ’90s, it was tricky. Other than Walter Dean Myers, there wasn’t much literature for young people of color. So I wasn’t interested in it, because I couldn’t connect. For me, the breakthrough was Queen Latifah. She was a hero to me. I studied her lyrics. Then there was the discovery of poetry and then poetry became my number one thing. I didn’t read a novel until I was 17, and it was Richard Wright’s Black Boy. That book changed everything because he sounded like my family, the way he spoke. Now, when I sit at the page, all I can think of are all the little Jasons who need something to read that they can see themselves in – that they can connect with. It needs to sound like them, it needs to mirror and mimic their energy so they can sit with it.

Photo: Jake Belcher, who shoots for The Writer, took this image at the Boston Public Library during the Boston Book Festival in 2015.