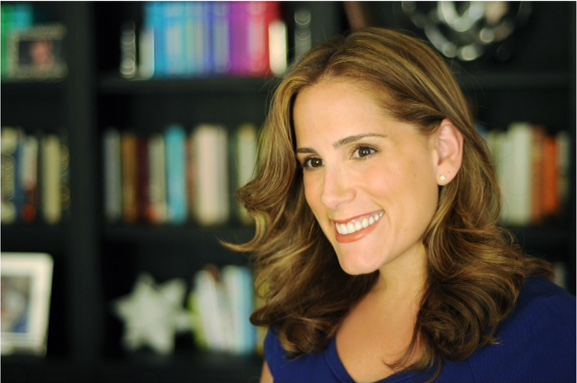 Julie Buxbaum, a Harvard Law School graduate and former lawyer, decided to step away from her legal career to pursue a career in novel writing. Her first adult novel, The Opposite of Love, was published in 2008, followed by another, After You, in 2009. She eventually made the switch to YA in 2016 with her smash hit Tell Me Three Things, which became a New York Times best-seller. Her highly anticipated second YA novel, What to Say Next, was published in 2017 and was met with much praise.

With realistic and well-developed characters and interesting plots, Buxbaum has a gift for creating YA novels that are immensely appealing. She is masterful at capturing the teenage experience with poignancy and humor.

Julie Buxbaum’s next YA novel, Picture a Blue Sky, is scheduled for release in May.

As a lawyer, you’re trained to use as few words as possible. You’re not allowed to get flowery. You stick to the facts, the bare bones. That’s helped to make me ruthless when it comes to editing. I think that discipline I learned as a lawyer translated into my novel writing.

It’s different with each book. Usually, I have a character and a voice in mind, and a theme I’m interested in exploring. Sometimes it’s obvious from day one, and sometimes I’ll look back and realize that I was obsessed with something. When I’m in the thick of it, I don’t necessarily see it. I’m not an outliner. I trust the process will take the book where I need to go. You have to really believe you’re going to get to that place. It’s less efficient than outlining, but it keeps it interesting.

I approach YA the same way I approached adult novels. The process is the same when you’re getting into the head of a character that’s 40 or 22 or 16. I feel like being a teenager has changed dramatically in some ways, such as social media. But the underlying feelings, like you’re on the cusp of adulthood and the world is about to explode open but it feels closed – those are universal feelings. I can’t remember details from that time, but I can remember the feelings so vividly.

I write to make sense of the world. Writing is a how I process what I’m feeling. I write as a form of therapy, and I’m much less happy when I’m not writing. It’s important to write about things that matter to you and scare you. Grief and loss have been a huge part of my life and make me the person I am. I actively try to avoid it, but it shows up in my work. It’s interesting to write about the balance between the hardest and the best things in life.

What’s great about YA?

While the process is similar, the community is different, and the responsiveness of readers is very different. Readers weren’t as easily accessible when my first novel came out. Teenage readers are smart and engaged, and it’s fun to travel and meet them.

I’ve had multiple full drafts on my next book, and this one has been a particularly brutal revision process. This is one of the harder ones, but I was due for one because What to Say Next flowed for me. This one has a story that is highly specific. It’s about something that happens to one person, and the specificity makes it more of a complicated story. I want to make sure readers relate to it, in spite of and because of the specificity. It’s also rooted in history.