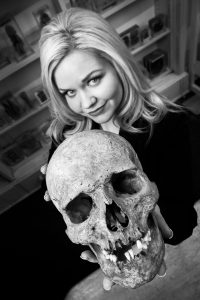 Medical historian Lindsey Fitzharris built a cult following with her blog, The Chirurgeon’s Apprentice, and her innovative YouTube series, “Under the Knife.”  She creatively uses both platforms to educate and entertain her audience about various topics related to the history of medicine. Several years after starting her blog and videos, Fitzharris, an American living in England, found herself facing deportation from the U.K. when her (now-ex) husband surprised her with divorce papers. The need to generate income, coupled with her background in medical history, led Fitzharris to write a book proposal featuring the story of Dr. Joseph Lister, a British surgeon famous for his work on germ theory and the development of antiseptic surgery. The Butchering Art eventually sold for six figures, and Fitzharris was granted indefinite leave to stay in the U.K. just 12 hours after selling the book.

The Butchering Art is an immersive read, as Fitzharris brings readers into Lister’s life and work. And while Fitzharris’ Ph.D. from Oxford (in history of science, medicine and technology) and research are impressive, so is her talent as a storyteller. She manages to make intense science relatable and compelling on the page. Fitzharris, now remarried to British cartoonist Adrian Teal, is currently working on her next book, which is about the history of plastic surgery and the story of pioneering surgeon Harold Gillies. In 2022, she will release a children’s book collaboration with Teal called SCOURGE!, “an illustrated romp” through history’s interesting diseases and unconventional medical treatments.

I call myself a storyteller first and foremost, and a historian second. Being a historian helps to enrich books and guide research, but I’m always looking for the heartbeat of the story. I see my book as a gateway into medical history – by giving the reader a juicy story to pique their interest. I’ve always been creative, even going back to when I was a child. I’ve always had a great imagination and a morbid curiosity. Now I add the element of being a professional historian. I don’t want my writing just to be didactic, but [I also want it to be] enjoyable. I want people to fall into the story.

I’ve never had an academic style, so it wasn’t hard not to write in a scholarly way. But understanding and digesting Victorian science and then getting it down in an engaging way for readers was a challenge. I wanted to bring thereader in. I want them to know what it felt like and smelled like, with strong descriptive elements that readers can envision.

My blog and YouTube videos came before my book. Platforms like that are important for writers. Writing content for those platforms challenges me, and I learn what my makes my audience tick. If people aren’t interested in something, maybe it’s not something I should cover in a book. You need a unique voice or perspective. When I started my blog, there were no other medical historians that were engaging the public in that way. There are now, but I was lucky to get in at ground zero. Eventually, I reached over 2 million views.

Writing those scripts are fun. They’re done with my friend, filmmaker and editor Alex Anstey. I wrote everything, and he came up with the gags and special effects. I was hesitant at first, but he explained that it’s not about me, it’s about the stories. I had to be less precious about things, and over time I’ve become much more comfortable on camera.

I couldn’t have had a better reception for The Butchering Art. It’s sold very well, and so there is that pressure of the publisher wanting a second book to be just as strong, if not stronger. I didn’t think of critics when I was writing my first book because I was thinking of the poverty I was facing. I did get some criticism by academics for being too accessible and not nuanced enough. But I know my readers want a fast-paced, interesting story.