Graphic novelist Lucy Knisley has food in her blood. Her latest work, Relish, tells the story of an upbringing immersed in the food industry and how that shaped her personal and professional life. Knisley’s childhood was spent dashing in and out of kitchens, tasting fresh morels, tomatillos, shiokara (fermented squid guts) and briny oysters. Her mother was a caterer and her father a foodie, so Knisley was born into a deep appreciation and fascination for food.

The 28-year-old said she has always been drawn to multiple artistic pursuits – visual arts, sewing and, of course, writing. After college, she funneled her passions into several graphic novels that have garnered attention. Her first book, French Milk, which Slate called “keenly observed,” documents her experience living and eating with her mother in Paris. Next came Relish, which Alison Bechdel praised as drawings that “don’t just tell great stories, they’re a crystal-clear how-to guide to everything worth doing in the kitchen. Step aside, Joy of Cooking.” Knisley’s third graphic novel, due out this year, details her adolescent struggles and journey to find her place in the world.

Both graphic novels and periodical comics have enjoyed a bump in popularity in the last year, according to industry observers. Knisley’s robust and touching memoir about food and family makes a case for that popularity. We met up at the Brooklyn Book Festival last fall, and Knisley told me about about her writing process and how she makes words and art come together in her books.

In my local library Relish was in the YA section. Is that where you intended for it to be?

It crosses various genres. What my publisher has been really good about doing is getting it to younger audiences, and so I think the opinions are mixed on where it belongs. Sometimes it’s in the graphic novel section, sometimes it’s in food, sometimes memoir, sometimes YA. It’s hard to pin it down.

When you wrote the book, who was your intended audience?

Anyone who eats! I really wanted to tell my story. So it is for people who like memoir, people who like autobiographical personal narratives and who like food or who are interested in food. 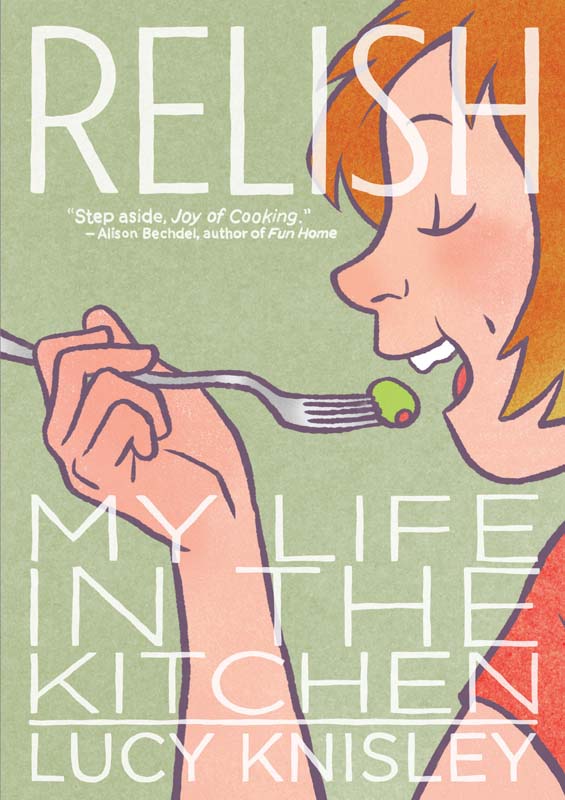 Tell me a little bit about your writing process. How does a graphic novel come together?

Relish was done in fits and starts. I would write a short essay that would later become a chapter, and then I would develop it on its own and move on to the next one. I wrote the chapters piecemeal and did each one from beginning to end, soup to nuts, all the way to the finished artwork. My next book I am going to write a lot more cohesively.

Relish was your first book working with an editor from the start. What was that process like? Was it difficult, or did you find it more helpful than writing off the cuff?

My editor is wonderful. She’s really understanding. She works with a lot of comic-book artists, and we all have very different processes. She had a pretty light touch and let me do it [my way]. I was daunted at the prospect of drawing an entire graphic novel and then writing an entire graphic novel. She helped me training-wheel my way up to writing a finished book. For my next book, I am prepared because I have this under my belt. My editor is a little more on me with lots of commentary, and she’s put me on a good writing schedule.

As a graphic novelist, do you consider yourself an author first or an illustrator?

It’s a balance. I didn’t want to have to choose between art and writing, and I found comics were a way to combine these two loves of mine. That’s something that I have always thought was a wonderful solution to that quandary of being stuck between wanting to tell stories visually and through the narrative. I get to do both, which is great. But if I have to choose which leads the way, it’s the writing.

The word “relish” comes up a lot throughout the book. Did that word have some significance for you, or is it just a word that you love?

The name existed alongside the concept from the beginning. It is a beautiful reference to this homey food that you make in your kitchen from stuff that you grow in the garden, and then it also has the double entendre of referencing enjoying the pleasures of life and the sensory awareness. What I love about writing comics about food is that it adds these layers of sensory input. There’s the act of reading it, and then you get the visual aspect. And when you do this about food you have the added element of remembering a flavor. So it really reaches you on a number of sensory levels. I thought that relish was a perfect encompassing word for all of that.

Traditional authors have to do all of the “illustrating” with words, whereas you have a bonus of actually being able to illustrate. With that in mind, do you make the words simpler or more straightforward?

It’s kind of a struggle for me because I love visual descriptions so much. But when you add them in comics, it’s overkill because you can just look at the image and go, well obviously he was wearing that kind of hat. It’s difficult for me to “show, don’t tell.” In my next book it’s a lot more of that, and I’m really struggling. It’s agony. Fortunately in Relish I got to have a narration that contained my voice and allowed me to use more words than I would normally be allowed to. 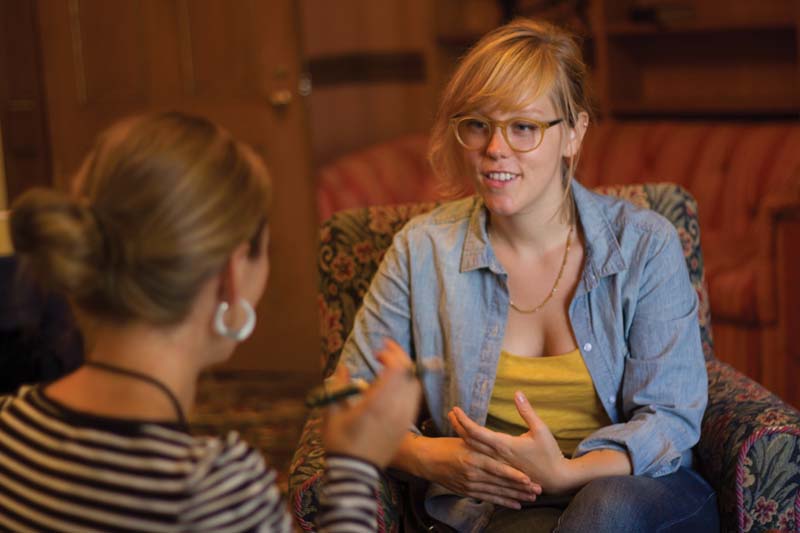 Tell me about your recipe writing. It is a unique part of Relish. I’m sure for some people the visual recipes make a lot more sense than text-only instructions. Is that how you see them in your mind?

I had been experimenting a little bit with putting “visual recipes” online, and they’d met with a great deal of success. I was really enjoying it, and they came together in a great way. You get a cookbook, and it’s a giant tome, and you have to flip through it and find the recipe. It’s this huge, impenetrable block of text. That’s always been something that frustrated me about recipes, because I was able to learn from my mom by watching her. I thought comic recipes were a great way to bridge that divide where you can see the hands performing the tasks that are involved, but you don’t actually have to have someone come in and teach them to you.

I have a book problem. For years my father managed 192 Books in [New York City] so he had an “in.” For birthdays and Christmas, he would give me these beautiful first-edition books. I love books, and I tend to read more prose and fiction than comics. But I think it actually evens out because through being in the industry, going to comic book festivals and having peers whose work I read, I probably read about 50/50 comics and written work.

Are you reading anything noteworthy right now?

Margaret Atwood’s new book MaddAddam. I read the first one 10 years ago when it came out, and I was backpacking through Europe with my friend. We read it and became obsessed. When the next one came out, we went to the launch party – which was totally weird. Now this new one is out, and my dad was running the New York Public Library event with Atwood so he got me a signed copy. Because they come out every five years – I always forget that they give me insane nightmares. So I’ve been not sleeping lately.

What’s next for you?

The new book I am working on is something of a continuation of Relish. It’s about my high-school experiences and how being an artist was something that didn’t go over very well in the traditional education framework. What this one is for food, [my next book] is for art and how art really guided me in my adolescence and saved me from terrible high-school times. It’s my “it gets better” project for art kids and misfit kids in high school. I was really rescued by art teachers, and that’s something that I wanted to pay tribute to. I also have a bunch of travelogue work that’s coming out in the next year. There’s one about going to Europe and exploring my freedom and youth, and another one is about the opposite: taking my elderly grandparents on an elderly person’s cruise.

What did you think of the food on the cruise?

Aubrey Everett is managing editor of this magazine.