“Any way I tell this story is a lie.” Those are the opening words of Lit by Mary Karr. We asked the boss of memoir why she began her story with those words. Read the excerpt below and her response that follows. 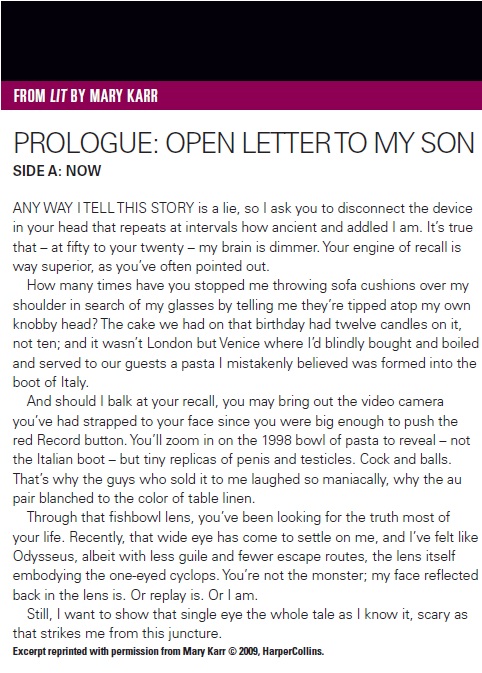 I guess because I’d been in the business of memory and trying to tell the truth and I wanted the reader to know that I was in that subjective land. And also to sort of feel my way into it.

So it was an open letter addressed to him, and I could imagine in that conversation him saying that. But I also wanted to establish that I was looking for that truth, however flawed I might be at finding it, that that was for me or is for me always the ultimate goal: The truth as well as I can come up, apprehend it, remember it, or cobble it together.

I think that a lot of what a good memoir is about is interiority: the inner life. So I think, letting the reader know that I was afraid of the truth. That I was afraid of writing the book. I was trying to level with – I was writing to my son, and I had a sense of guilt and failure as a mother as I think most parents do, certainly in this age when children are so revered. Back when we thought of them as dogs and cats, when we thought of them as farm animals, it had to have been easier.

But now I think in this age where we’ve anthropomorphized our children, we all feel a little bit guiltier, a sense of failure as a parent. And you know, I was an alcoholic, I suffered from depression, I was in a mental institution when my kid was 3-years old. You don’t wish that for your kid. But I’m who he got, so I’m just trying to own that – I’m trying to clean up my side of the street a little bit, you know?

Nicki Porter is an associate editor for The Writer.