Megan Mayhew Bergman’s short stories feature strong, intrepid, daring women. She writes about them, she says, because they are her opposite.

“It’s obsessing over what I admire, more than what I actually possess,” she says.

By her own admission, Bergman has a lot of fear. She is sensitive. She likes things to be just right.

But this self-assessment doesn’t do the native North Carolinian justice. Bergman published her first story collection Birds of a Lesser Paradise in the midst of completing graduate school, moving from North Carolina to Vermont, mourning the loss of her mother-in-law and taking care of her colicky newborn daughter.

“In a way, it pulled me through,” she says of publishing her first collection during that trying time, “and I was so down that I gave myself permission not to care about criticism anymore. So in some ways, breaking down a little bit can be very fortuitous because you get to rebuild.”

Three years after the publication of that collection, Bergman went to Kenya with The Boma Project, an organization that helps impoverished women in Africa start small businesses and obtain access to education and healthcare.

Bergman’s social media posts from her journey offer a glimpse into a woman who is as brave and adventurous as those she writes about.

On Twitter: “I just sat across from a Kenyan warrior in Marsabit who told me about drinking cow’s blood and milk & being chased by a rhino!!”

On Tumblr, with a photo of a small hut: “My hut last night in Korr, Northern Kenya. I arm wrestled a former Maasai warrior & lost gracefully.”

The woman who wrote those posts is, if not fearless, certainly making a conscious effort to face her fears and expand her horizons.

“I grew up in a pretty conservative, safe household,” she says, “and I think for a long time I was afraid of getting my hands dirty in other people’s problems. I just don’t want to be that person anymore. I want to be involved.”

The fascination – “obsession,” as she says – with the environment and the lives of women that drives her to take action, also seeps through in her writing, including her 2015 short story collection Almost Famous Women and the nonfiction essays she writes for Ploughshares, Salon.com and other publications.

“[These topics] are things that get me up in the morning,” Bergman explains. “They’re the fights I pick with the world.” 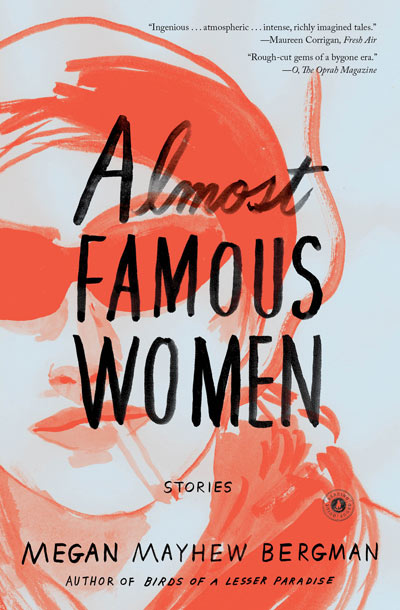 Her newest book, Almost Famous Women, explores the lives of 13 real women, each of whom had a brief moment of fame in her lifetime, but in the decades or centuries since has all but completely faded from the public consciousness. Bergman discovered these women in various biographies and books, and she became consumed with finding out everything she could about them. Bergman took 10 years to shape Almost Famous Women and then began writing the stories, hitting pause on the novel she had a contract to write.

“The short story form comes to me very naturally because I’m a Southerner,” Bergman says, “and even though I’m a very secular person now, I spent my childhood in church. The shape of a sermon is so similar to a short story, with the rise and the fall and the morality tale and the focus on language and cadence.”

The Southern literary tradition, Bergman says, is rooted in short fiction. With some distance from her childhood and young adult years in the South, Bergman loves to explore the difference between regions of the country, and is fascinated by place and setting in her writing.

“I’m really interested in [the question of] can you really write regional fiction anymore?” she says. “I think you can, but you can’t do it in the way that you used to. If you write a Southern story that’s all biscuits and ‘y’all,’ then it’s a false note.”

When writing Almost Famous Women, Bergman worked hard to avoid hitting false notes because her characters’ real lives had to be contended with. She wanted to get their stories right and be true to who they were, while still giving herself the creative space to fictionalize parts of their stories.

“Since so many of these women are missing parts of their stories in contemporary knowledge – we have a few letters, there are footnotes in other people’s biographies, there are a few scant newspaper articles – you already have to engage your imagination to imagine their lives anyway,” she says. “That helped move me along, but that felt like the greatest risk. I have a really lengthy author’s note at the end to make it right, make it OK, but it felt a little dangerous.”

The book itself also represents a somewhat perilous choice.

“One of my bigger philosophical thoughts about the collection as a whole was I didn’t want to write ‘Almost Famous White Women’ or ‘Almost Famous Straight Women.’ I wanted it to be a diverse collection,” Bergman explains.

But she says, when writing short fiction, you have more room to challenge the status quo because short story collections don’t operate in the same sort of mainstream commercial realm as other genres.

“Readers seem to be fine with it,” she continues. “What used to seem scandalous a couple years ago hardly seems scandalous now.”

Though the women who inspired the collection all are real, Bergman didn’t get a free pass when it came to character creation. In fact, she invented most of her main characters and story narrators, saying she thought the collection would read in all-caps if she told every story in first-person from the almost famous woman’s perspective.

“When I think about developing characters, I think a lot about their interior bullshit and how it manifests,” she says. “I’m interested in them as psychological beings. I believe in what James Wood says in his book How Fiction Works about how you have to see a character brush up against the world.”

Bergman is still on contract to write the ditched novel. Now two years past deadline, the book remains a work in progress.

“I’m giving myself a lot of permission to fail with my early drafts because a novel is an entirely different form than a piece of short fiction,” she explains. “It’s a different level of intrigue and pacing to sustain. And I don’t want to just put out an adequate book, I want to put out a really strong book, especially now that I know what it’s like to have to stand behind it.”

Writing the novel has been a whole new battle for Bergman. She has to resist the desire to read the entire piece from the beginning every time she sits down to write, as she would normally do with her short fiction. And because she lives a somewhat hectic life – mother of two; wrangler of a small menagerie of dogs, cats and other livestock; manager of a small farm; full-time associate director of the masters of fine arts program at Bennington College – she doesn’t consider herself a full-time writer. Instead, while she farms, takes care of her children, goes for a run, she’s always mulling things over, writing in her head.

“If I let ideas sit for a while, the quality bar is always better,” she says. “I’m an obsessive ruminator.”

One thing she obsesses about is finding clarity in her work.

“Clarity is something that I absolutely idealize,” she says. “I think a lot about the success of pop songs and their secret brilliance. There’s been something really essential and universal distilled down to the one little kernel of truth and stated plainly and repetitively. I admire clarity more than I admire fluff and flourish.”

That goes for her nonfiction writing, too, most of which also centers on her captivation with the environment and the lives of women. A very versatile writer, readers are likely to find themselves just as enraptured by Bergman’s essay about her complicated relationship with cosmetic products as they were with the story “The Siege at Whale Cay” in Almost Famous Women about Joe Carstairs, a wealthy lesbian heiress deemed the “fastest woman on water” because of her talent for motor-boat racing.

Bergman recalls a teacher telling her that if a writer understands the basic principles of narrative and description, the writer can move easily between fiction and nonfiction. She took this as permission to explore both genres.

“Ultimately, you have to be a good storyteller,” Bergman says. “You have to be considerate of your reader, trust your reader, and have a reason for not wasting the reader’s time, no matter what genre it’s in.”

Recently, however, Bergman has scaled back her online essay writing and social media posting (with the exception of her dispatches from Africa, of course). With all the noise and content floating around online, she wants to be sure she’s adding to the conversation in a meaningful way whenever she posts something.

“What inspires me a lot are people who are willing to get their content by living,” she says, “by getting their hands dirty in the world. I think there is a lot lost if you’re just living in the Internet day in and day out.”

And even though it requires a gut-check every now and then, Bergman has managed (mostly) to rid herself of writer’s envy.

“There are always sales figures or awards or lists you’re not on,” she says. “I have a friend who is a sort of female shaman from the backwoods of Vermont who told me, ‘Megan, let envy just tell you that it’s something you want. Don’t let it demotivate you or make you feel bad about yourself. It’s just another way of saying this is something you might want.’”

What does Bergman want now?

“I have two girls and I just want to be inspiring to them,” she says. “I want to be the woman they think I am, like that expression about dogs. I covet my girls’ opinions more than I covet my dogs’, but I do have five dogs, so they count, too.”

And maybe she’ll never drive an ambulance in a war zone or play trumpet in the first integrated women’s band in the U.S. like her beloved almost famous women, but a writer who brings to life ambitious, beautiful prose about issues that matter to her and allows herself to fail and to experience and travel – that’s pretty inspiring, too.