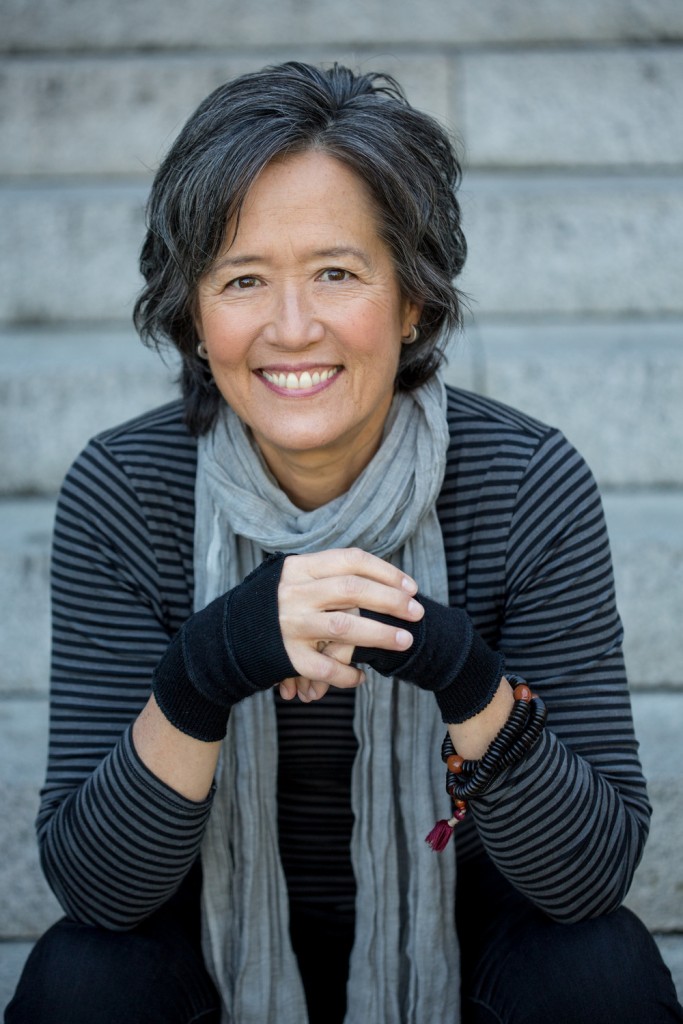 Ruth Ozeki’s novel, A Tale for the Time Being, won a string of awards, including the LA Times Book Award, and was short-listed for the Man Booker Prize. Junot Diaz, Pulitzer Prize-winning author of The Brief Wondrous Life of Oscar Wao, said, “Ozeki is one of my favorite novelists, bewitching, intelligent, hilarious, and heartbreaking, often on the same page.” I could not agree more. Published in over 30 countries, A Tale for the Time Being tells the story of a mysterious diary, which washes up on a beach on the Pacific Northwest coast of Canada in the wake of the 2011 Japanese earthquake and tsunami. The diary, written by Nao (pronounced “now”), a troubled schoolgirl in Tokyo, is discovered by a novelist named Ruth, who becomes obsessed with discovering the fate of the girl.

When I finished reading Ozeki’s novel, my first reaction was that this book was true to the high praise given in its starred review in Kirkus: “a masterpiece, pure and simple.” My second reaction was wondering how in the world she wrote the time-bending novel, set in Japan and spanning three generations of a family who struggle with conscience. On top of juggling these multiple plotlines, Ozeki manages to find the sweet spot between humor and tragedy, even in the midst of chronicling a suicidal teenager who is being brutally bullied. And did I mention that she inserted a novelist named Ruth into the novel?

For her part, Ozeki has simply described her book this way: It is about a suicidal girl, a 104-year-old Zen nun, and a novelist with writer’s block.

Ozeki wrote two novels before A Tale for the Time Being (My Year of Meats and All Over Creation); in addition to being a novelist, she’s also a filmmaker and a Zen Buddhist priest. She is Japanese-American, married to the German-Canadian artist Oliver Kellhammer, and she is a dual citizen of Canada and the United States, dividing her time between British Columbia and New York City. It’s impossible to find just one category for Ozeki, unless there is a category for living a pluralistic life.

I talked with her on a brilliant autumn day at Smith College in Northampton, Massachusetts, where she is currently the Elizabeth Drew Professor.

This is possibly the most time-bending book I’ve ever read. How did you keep a handle on all the reverberations of time? Did you ever feel like you could get lost?

Pretty much constantly. The biggest struggle was the character of the reader, Ruth. The first voice that came to me was Nao, and she said “Hi, I’m Nao, I’m a time being. Do you know what a time being is?” She was clearly addressing somebody. But that was odd because usually when we write a diary, it’s for ourselves. But she is writing to somebody, and she doesn’t know who this will be. In the beginning, she speculates and says, “I know you’re out there.” I didn’t know who the reader was going to be, but both Nao and I knew there was a reader. She continued to write, and I continued to search for a reader. It was like casting for a play. I would invite the character into the fictional world, and I would arrange for them to find Nao’s diary. The character would start to read it and start to interact with Nao across time and space. The reader would begin to develop into a character. Then I’d realize that this fictional world that was getting all plump and juicy had suddenly gone flat. They were interfering with the story. Torquing it in the wrong direction. Then I would thank the character and invite the character to leave. And I would be back to waiting for another character to show up.

What was it like to wait for another character to show up?

It was a form of death every time. Death and despair. But I’d think of another character and go through the same process; the character would enter the book, I would arrange for the character to find the diary, and the diary was a little longer each time because Nao kept writing. In my fifth try, I ended up with a character who had no name, no gender, no age, no job, basically a cipher. I finished a draft, over 500 pages. I knew it was a pretty terrible draft, but I sent it to my agent, Molly, who agreed that it was not a very good draft. We were getting the manuscript ready to send to my editor, and that’s when the tsunami hit Japan.

The tsunami in 2011 changed the entire trajectory of the book, almost as if the story was waiting for the event. Tell us about the connection with Japan’s disaster.

It was one of those catastrophic events that just broke the world, a cascading disaster. I realized that this book was no longer relevant. The catastrophe had caused a rift in time. I had written a book that was a pre-earthquake, pre-Fukushima book. I withdrew the book from submission and gave up. It wasn’t going to work the way I had written it. This was a terrible moment for me. My husband, Oliver, pointed out that this earthquake had broken the world, and the fictional world of my book was also broken, and that if I entered the world myself, as a “real person” in a novel, it would allow me as “Ruth” to talk directly about the tsunami and to bring it into the heart of the book. Once I decided to step inside the book as a character, the book wrote itself. It was so easy. When I unzipped the manuscript, the interwoven voices were there from the beginning. I threw about 400 pages away and rewrote it. I started in May and finished in November.

You had your own personal tsunami: the death of your father, your mother struck down with Alzheimer’s disease, and what sounds like paralyzing writer’s block.

I was taking care of my mother, who had Alzheimer’s. She died in 2004. Then I had lost both my parents, and there was a real period of grief and just really trying to figure out what is life about and what makes it worth living and the tumultuous reassessment that you go through when you lose your parents. I was floundering with writing. During that time I got very engaged with my Zen practice. I made the decision to train and ask for ordination. I wasn’t sure if writing was going to work anymore, but if it didn’t, that was OK, because I had this thing that was really helping me, and maybe I could just help others. I was ordained in 2010.

A lot of the plot has to do with suicide. Have you heard from adolescents about their suicidal thoughts and experiences?

Yes. We’re afraid of saying the word “suicide” and talking about it. Certainly the word suicide has a kind of energy that is frightening, and people can be afraid of talking about it. Why is it that we forget we were adolescents once? I don’t forget that. Writers need to keep that part alive in order to write. What’s important (for adolescents) is that you have a lifeline; it can be your friends, it can be your family, church, writing practice, a teacher, your cat, your gerbil. And little by little, the hormones subside and you develop coping skills and you develop passions and things that are really worth living for, and you get through that difficult period.

Let’s say you were not an ordained Zen priest who meditates regularly. Would you still suggest that writers include meditation as part of their writing practice?

Oh yes. One of the reasons I took to meditation was this sense that it was going to help my writing. Meditation helps you focus and concentrate; it attunes you to what is happening in your body. It’s a very sensual practice; in Buddhism we talk about six sense gates, like the eyes, ears, nose, tongue, skin, and the mind. When we’re writing, we need to be able to activate our senses. When I teach writing, I teach meditation first, doing sense scans, training the writers to tune into their various sense gates. Then they can apply that to their writing practice. You can close your eyes and project yourself into the fictional scene, tune into your senses, look around and discover the most amazing things, things you wouldn’t discover otherwise.

There were 10 years between books. How did you support yourself for 10 years?

I have a very frugal life; we were living on a remote island in Canada, and we don’t need much to live there. For me, keeping a low overhead seems really important. I don’t ever want to have a lifestyle that is bigger than my writing. We were growing a lot of our food, sometimes trading for it, but my first two books have been widely adopted for coursework in colleges and universities, so I get a lot of speaking engagements.

How has film influenced your writing?

What is a way that writers can learn some of the approaches in film?

Study film. You don’t have to go to school to do that. Find a film that you like, put it on your computer, and watch it very slowly and pay attention every time the picture changes. Watch it without the sound. Read a good book on editing film. When I finally went back to writing, I said, I get it! Do you remember [A] Wrinkle in Time and the tesseract (the tesseract is a space warp, a portal from one area of space to another)? You think of time like a linear string, the starting and the ending. Instead, just put the two end pieces of the string together.

How did you physically work with the novel?

I like to get a really big table, or I use the floor. Then I print out the entire manuscript and literally spread it around. Once the book gets too big, you can’t spread it page by page, but you can spread it chunk by chunk, then I walk the book. I walk around it. Annie Dillard does this.

How does your mixed race identity influence your writing?

It affects everything about my writing. I always write a mixed race character. I like writing from that perspective because it’s neither here nor there; it gives me a broader palette. I feel that coming from two cultures is hugely enriching. My entire life has been lived in this kind of duality; Japanese-American, everything is influenced by duality. Including choice of genre, refusing to stick to one genre. Jane Smiley wrote a review of My Year of Meats that said it was a comical-satirical-farcical-epical-tragical-romantical novel. Pointing to the fact that it refuses to be one thing. That is who I am.

Jacqueline Sheehan is a psychologist and a novelist. Her sixth novel, The Tiger in the House (Kensington), will be published in March 2017. She teaches writing at Grub Street in Boston and at international writing and yoga retreats. Web: jacquelinesheehan.com.