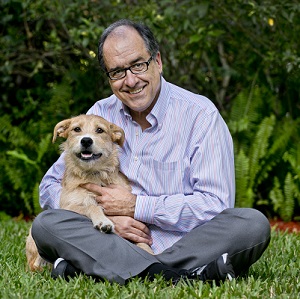 Scott Eyman has a big presence. And why not? He has written biographies on some of the biggest names in Hollywood: Cecile B. DeMille, Louis B. Mayer, John Ford. His most recent book is John Wayne: The Life and Legend. In a review of the book for The New York Times, filmmaker Peter Bogdanovich writes: “The portrait Eyman paints very much resembles the Wayne I knew for nearly 15 years: extremely likable, guileless, exuberant, even strangely innocent.” That’s not faint praise for a biographer. But Eyman puts in the hours. “When you choose a subject – and these books take a God-awful lot of time – you have to be discerning about who you want to spend four or five years of your life on.” Eyman and I met at the Miami Book Fair International last year and talked about his process, John Wayne and Hollywood history.

Why biography?
If someone else had written what I regarded as a really good book on John Wayne, I wouldn’t have written mine; but I’m not so egocentric as to think nothing is complete until I complete it.

Why not novels?
I don’t know that I have the fiction gene. I can do scenes. I can do dialogue. Plot? I have no idea. But with a life – with a biography – your plot is already there. You just have to choose how you are going to narrate that plot.

What’s the danger with biography?
Imposing an agenda. Lack of objectivity. In the case of John Wayne, the previous books that had been written about him tend to fall into political camps. If a liberal was writing the book, he was a draft-dodging hypocrite. If a conservative was writing the book, he was the risen Christ. And I didn’t think either alternative was particularly appropriate. I just tried to be as objective as I could, as clinical as I could.

How do you develop character when the character is factual?
I talk to people and talk to people and talk to people. I read documents. I do as much primary research as possible. At some point, something begins to crystallize, an idea of who this person was begins to form in my head almost like a pearl around grains of sand. But you have to be open to things that go against what your idea of that person is because people aren’t consistent; they’re all over the place.

When did you know you had John Wayne’s story?
Meeting him, which I did once for 90 minutes. He was one guy on screen, but he was somebody else who wasn’t that guy on screen. He was huge. Imposing. Charismatic. Impressive. His body language on screen was very big, very commanding, very domineering, very theatrical. In person, he would hold himself very quiet, and I think it was something he learned to do intentionally so as not to intimidate people. He knew he was John Wayne and that people would be a little intimidated by him.

Where does he live in your thoughts now?
I read my books when they come out. I’ll get the first copy from the publisher and read it a page here, a page there for a month or two. I won’t start at page one and go all the way through, but I’ll dip into it consistently over a long period of time, and then I’ll put it down for 10 years, five years, whatever, because at some point I need to cleanse my palate and get on to the next thing. And if I’m constantly thinking about Louis B. Mayer or Cecil B. DeMille, it’s an obstacle to thinking about John Wayne.

How did you learn how to write?
I could always write. It sounds arrogant. Junior high school – I could do book reports very well. I always got As on my book reports. In a sense, I was following the path of least resistance. I wanted to be an archaeologist. My original ambition was to be an Egyptologist.

Well, you kind of are.
I’m a cultural archaeologist. I couldn’t handle the carbon 14. I took one or two courses in archaeology and thought: Oh my God, I could do the fieldwork, but there’s no way I can cope with the science. My other great passion was old movies.

Alicia Anstead is the editor-in-chief of The Writer. She also teaches writing at Harvard University Extension School.