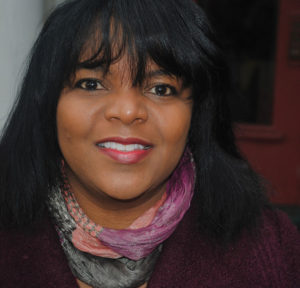 Stephanie Powell Watts. Photo by Bob WattsIn her debut novel, No One is Coming to Save Us, Stephanie Powell Watts brings us the heartfelt struggles and hopes of a contemporary Southern African American family. Her writing draws you in and compels you to feel what they are going through – their sadness and joy and love. Watts’ use of multiple points of view successfully transports the reader into her characters’ lives. The book is the winner of the NAACP Image Award for Outstanding Literary Work and was named one of the best books of 2017 by numerous publications, including The Chicago Review of Books, Entertainment Weekly, and The Millions. Her short story collection, We Are Only Taking What We Need, won the Ernest J. Gaines Award for Literary Excellence. Both books feature exceptionally beautiful covers created by artist Amy Sherald, who later went on to paint First Lady Michelle Obama’s portrait for the Smithsonian National Portrait Gallery.

I wanted the story to be multi-focused, to sort of mimic life in a way. It brings a sense of insight about things that you can’t know, but suspect. I also wanted people to have some insight into who the people are, so when they are doing bad things, it’s not so easy to condemn them. I wanted readers to have sympathy, if not empathy, for the characters.

Most of the moments in my own life that have been really trying or very sad have always had a sliver of humor in them. It’s a way to cope – a defense mechanism. So when the characters use it, it should feel true to life. For instance, one of my students was talking about picking out her grandmother’s casket, and how her grandmother was notoriously cheap, so they asked, “What’s the cheapest one you’ve got?” It doesn’t mean a moment isn’t serious or sad or profound. But it still has that humorous element to it.

It’s a “getting to know you” exercise that takes a while. I always start with a name, what they look like, how they literally move in space, how they might show embarrassment or pride. As I get to know them more, I put them in a situation. I could write 30 pages of how a character meets another character and not wind up using any of it, but I’ll get to know that character. No writing is wasted.

Coco Chanel said something like, “When you’re getting ready to go out, take off one thing.” I think it’s similar with dialogue. Cut it off. Don’t say too much, because then it gets to a place where it’s not natural. Most people don’t go on and on for sentences in real life. Also, when two characters are in a space that’s emotionally raw, they can’t always articulate everything. They’re talking, but not saying the right things. Another thing is to never let people directly answer each other’s questions if you’re trying to create tension.

I really like to get something done in the morning. You remember those commercials about the army – “we do more by 7 a.m. than most people do all day” – something like that? I want that kind of smug completion. What were you doing at 6 am? Sleeping? I was crying over a blank sheet of copy paper. Game, set, match. Clearly, I am not a morning person, but I force myself to get up and at ‘em. Writing early makes me feel virtuous all day and I am all for the illusion of virtue. Fiction writers are hypochondriacs. They are always trying to complete the story, any story. If you have an ache it must be a terrible disease. You have to get up, get going, get productive before your mind manufactures other narratives instead of getting to work on the story you need to get done.