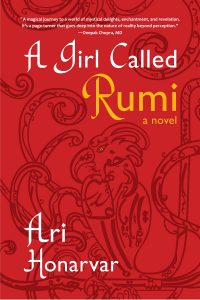 The writer Ari Honarvar is the founder of the humanitarian organization Rumi with a View, which works specifically in areas of conflict to heal those affected with poetry and music. And in her work with Musical Ambassadors of Peace, she brings music and dance to the United States-Mexico border. Her novel A Girl Called Rumi (Forest Avenue Press, 2021) draws on her own experience as a girl growing up in Iran, and she’s written for Teen Vogue, The Guardian, and more. We sat down to talk about her process, working from your past, and more.

The Writer: Tell me a little bit about the merging of forms and inspiration in your life: You draw from everything, poetry to dance to song to humanitarian work.

Ari Honarvar: I’m kind of a little bit anti-compartmentalization. Merging things – that’s life, you know, [just like] our bodies: Our blood is going everywhere. Muscles are everywhere. It’s not like they’re compartmentalized to one spot. And why should we be we? We are so much better when we are connecting with ourselves, our inner self, our community, friends, and nature. And then just allowing that to inform our actions.

TW: What does that do for your art, do you think?

AH: It helps me pivot with what I cannot control; move with and bring all of myself. Then the ideas just very effortlessly come out. What resonates with me is bringing some of the joy that was denied of me as a kid because when I was six, women of Iran lost their right to sing in public or dance or ride a bicycle. And then, just as this war on women was becoming our new normal, Saddam Hussein attacked Iran and started an actual war that lasted eight years and took countless lives. So music and dancing at this time was illegal. There was an actual war, and there was a war in our pastimes and our coping mechanisms. We couldn’t play backgammon, we couldn’t sing, we couldn’t dance, we couldn’t laugh, bring attention to ourselves as girls. So we had to find really resourceful ways to bring joy to our lives.

That idea has really stayed with me. One is the power of storytelling: how we can reframe our circumstances to tell ourselves a different story? And the other thing is using the dance and music that was denied to me as a child.

TW: A good many cultural and personal touchstones show up in your book. Tell me a little bit about what it’s like to take those touchstones in your life and move them into a novel.

AH: I definitely drew from my own experiences. I also had a childhood friend, a boy. We had such amazing adventures together, and then the revolution happened, and all of a sudden, you couldn’t play together because of the strict interpretations of the Shariah law that the Islamists who had taken over the government now implemented. So that was basically the crux of it all: What happens to childhood friendships when this happens, when something so beyond your own control or your own life comes in and just disrupts everything. What does it do to family bonds? What happens to relationships when an entire region is thrown in the crucible of political oppression and war? So much of my adult life has been figuring out, you know, just meditating on the nature of suffering, and what is it all about, and what is the quality of suffering? And how can we dance with suffering?

TW: You’ve made the really interesting choice in your novel to tell the story from both the point of view of the young girl as she’s growing up in Iran and then the woman who’s living in San Diego, who is experiencing a second coming of age. How did you make the decision to tell the story from those dual points of view?

AH: A lot of agents wanted me to just stick with the YA version because it just doesn’t have all the heavy elements, but I really wanted to present what happens to an adult who has been through so much and then they find themselves in a strange country, and they’re assimilating, and they feel like they’ve got everything under control. And then, all of a sudden, their past comes to meet them in a very adamant way. The past is saying, you have to deal with me.

I think that’s just something that I see in so many adults: that they have to go back, and they have to find their original wounds and tend to it and deal with it and find beauty in ways of dealing with a really terrible past. So that was very important to me, that the person is kind of middle-aged, in their 30s, and it’s not like they have their whole world ahead of them as a young adult. But they have lived some, but they still have to go back.

We honor suffering. We also honor joy. And that’s the kind of story that I want to tell, and I want to read.

TW: I think it’s interesting that you talk about one as being not as heavy as the other. The refugee story is arguably pretty heavy, right? Can you say a little bit about what it was like to write that part of the story, to write the younger, the 8-year-old, part of the story?

AH: It was very effortless. I think I struggled more with the adult version than the child version, the adult one, because the character, the Kimia character, is kind of, you know, stuck. So it was like, how do you present someone who is kind of resistant to life’s call to adventure and who does not want to move and make them interesting and textured and three-dimensional? So that’s kind of what I was. Definitely, that was the challenge for me.

The reason that it was easy to go there for me was because there’s so much magic present, even in the most terrible places, the most terrible times. And especially when you’re a kid…your imagination, it becomes such a savior when you’re dealing with traumatic issues. I was not resistant to go into the terrible things because the balance was always there, the balance of joy and summoning myths and poetry and wonderful things. So that part makes me really want to just keep hammering the point that we honor suffering. We also honor joy. And that’s the kind of story that I want to tell, and I want to read. It’s not one-dimensional, but it keeps kind of going back and forth between the two. The joy becomes the medicine that you can take with the hard stuff and digest it and integrate it.

I wrote an article back in the beginning of the pandemic which became super-popular. I was syndicated in over a dozen magazines, and it was called, “When savoring a pleasant moment is a radical act.” I basically was [saying], not only do we need joy, it’s our birthright to have joy, [and] also it helps us deal with challenges when we increase our capacity to have joy. [It] also increases our capacity for suffering.

TW: Can you talk to me a little bit about the juxtaposition between your novelist side and your essayist side?

AH: Being a reporter, a journalist, is so different than the interiority that we get into as essayists. The thing about reporting is that it is so essential to our democracy to see what is happening in the world, but in a more objective way. For example, when the family separation was happening, I reported on a separated girl. She was 6 years old [when] she was brought in. She was in Texas, taken away from her mother, and was abused, sexually abused, in another detention center in Arizona. And there was a form that she had to fill out. Mind you, she’s 6 years old, and she doesn’t speak English. She can’t even read or write. And they made her sign a form that says it is her responsibility to stay away from her abuser. And so I think: The cruelty and atrocity of our government to have done this just brings it into such stark terms. This kid was traumatized for a long, long time. She had to sleep with the lights on for months, and she wouldn’t let her parents touch her even after they were reunited because she didn’t recognize her mother, her own mother – she thought her mother was another social worker.

I think it’s important to have that side to just present the facts the way that they are. And then, to be able to digest this terrible, terrible news, we have to go to our joy and to our happy places and to our songs and poems and music and anything else [in] nature that brings us that ability to deal with the stark facts.

That’s basically what my work is: Trying to get better and better at empathizing.

AH: I definitely draw on the reported stuff for my fictional work and also from interviewing. I’ve danced with thousands of refugees and asylum seekers, and I’ve heard their stories when they were happy to tell them to me. And all of that helps me with empathy. So as a reporter, I can be more empathetic and really be protective of those who I’m interviewing. I’m not just trying to get a story: My No. 1 priority is to care for vulnerable populations, to protect them and make sure that they’re OK when I leave. So, yeah, it’s all this thread of empathy that is woven through my work. And that’s basically what my work is: Trying to get better and better at empathizing.

TW: Do you find it an ever increasingly large task? Is there ever a point at which you say, OK, I’ve done enough?

AH: My life, my work, is so holistic. So if I’m going to go out there and see these terrible things and report on them and be affected by them, I better be taking care of myself in a really diligent way. I care about what I’m consuming, both information-wise or food-wise; how much my body moves throughout the day; exercise; how much nature I’m exposed to, etc., to be able to deal with what is happening. And then, yeah, there are times when I need to recharge. So I go and do that so I can continue. But I see it more as a marathon, something that is lifelong. This is my calling. So I don’t think that at any point it’s going to be like, That’s enough. I’m done. I’m going to go do something else.

—Yi Shun Lai is the author of Pin Ups, a memoir. She teaches in the MFA program at Bay Path University and is a founding editor of Undomesticated Magazine. Visit at undomesticatedmag.com.

Advertisement Writer Priya A. Desai’s family has lived in Los Angeles for generations and was one of the first Indian families to settle there. Her … END_OF_DOCUMENT_TOKEN_TO_BE_REPLACED