Over 20 years ago, a good friend of mine told me, apropos of nothing, that he thought the entire industry of all-inclusive resorts was corrupt. He said he’d been to a Sandals resort in Jamaica and opted to go “outside the gates,” as he called it, and had been horrified by what he’d seen there. Poverty, he said, was everywhere, but also, people living a life quite apart from the resort.

This confused me at first. The line we’d been fed was that resorts like Sandals and Barefoot and Club Med fed into the local economy, hiring people to work at their resorts and in general contributing. The picture John painted for me was very different.

It wasn’t until I finally went to an all-inclusive for myself that I actually understood what he meant. The multi-national resorts hired childcare or waterskiing or parasailing instructors from America or Europe; the local people who did get hired on to work at these resorts were usually cleaners. You didn’t really speak to them.

In any case, I haven’t been to an all-inclusive resort since then – it was too obvious that we visitors were just borrowing the scenery. But I also didn’t make any further attempts to get to know, as a responsible tourist, the Caribbean Islands my friends were talking about traveling to: the Dominican Republic, say, or Trinidad, or Jamaica or the Bahamas. And, perhaps even worse, I did travel there on multiple disaster-relief efforts for an international NGO I volunteer for: I’ve been to Haiti three times for earthquakes and hurricanes, and Dominica twice for Hurricane Maria. 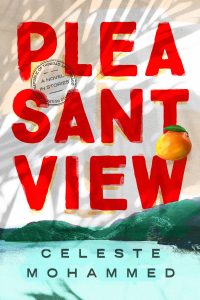 So when I went looking for literature of the Caribbean, I was, despite my best intentions, still operating from a very limited knowledge set. My interview with writer Trinidadan Celeste Mohammed, whose book of linked short stories, Pleasantview, came out in 2021, took place against this intellectual background, and Mohammed quickly and gently put everything in perspective.

“It has always interested me over the course of my entire life and my many trips to the U.S. how little Americans understand about their backyard,” she tells me. “We are your backyard, right? And the thing is that, politically, your government understands very well how important we are to your well-being. That’s why they always intervene in matters in the Caribbean…And if you just go back, I mean, come on. Alexander Hamilton was a Caribbean immigrant. So there’s so much that the Caribbean has done and it has fed into America. But Americans remain clueless as to what constitutes the Caribbean. There is this just one-dimensional view of the Caribbean, established narratives of what the Caribbean story should be.”

Mohammed tells me that this is one reason she opted to get her MFA, which she received from Lesley University in Massachusetts. “I am not interested in writing into those established narratives. I am seated here, live and on location and able to give you directly an inside view as to what it is like to live here.”

Pleasantview takes place in a fictional neighborhood of Trinidad that is guided by everything from good intentions to political corruption to colonialism. Pleasantview’s people try for the American dream, flying to New York and leaving their entire families behind. They try to put their own stamps on their identities even as they carry around the genes of their colonizers. The women in Pleasantview do their best to survive in a world that does not value them. The young men in the neighborhood are guided by everything from power to the promise of a better life, if only they will convert to Islam. A good chunk of it is written in Trinidadian vernacular.

And yet, despite all of this texture, Mohammed says, “Seems like the publishing industry in America doesn’t really want that. What you want is, you want me to continue to support your view, that of exoticism and eroticism and, you know, the kinds of stories like, ‘oh, the beautiful, Black, goodhearted slave, prevailing or falling in love with the white.’ No, that’s – I’m not doing that.”

Mohammed began writing the stories in Pleasantview while she was in her MFA (she’d also written and pitched a novel in the meantime, and didn’t find publication). With the stories in Pleasantview, she followed exactly the formula that most writers are told will lead to book publication: write the stories; get them published in good literary magazines; from there, trust in the system and someone will pick it up. Mohammed’s agent was sure this would happen, too. One by one, her stories were published by magazines like the New England Review; Kweli Journal, and the Beloit Fiction Journal. They went on to win awards: the PEN/Robert J. Dau Short Story Prize for Emerging Writers, the Virginia Woolf Award for Short Fiction. And yet, her agent came back time and again with rejections.

Mohammed began to reconcile herself to the idea of self-publishing. “I believed in the book, and I believed that Caribbean people would embrace this book because I knew there was nothing like it that was unapologetically telling the truth. And I felt people would see it and people would embrace it anyway.” But one of her mentors at Lesley University had another idea: The mentor sent the manuscript to IG Publishing, who couldn’t believe the work was still on the table.

Mohammed is very philosophical about the whole string of events. She prescribes part of the turn of events to the pandemic: by the time March 2020 rolled around, she’d “failed twice,” as she put it, in getting either a novel or the book that would become Pleasantview accepted for publication. “I hadn’t written anything since the news of that rejection of the novel September the previous year. I had come to a point where I was like, ‘Listen, I’ve thrown away my legal career. I’ve invested everything I’ve done, everything a person could possibly do. And I failed twice. So. I don’t know what I’m going to do. I don’t know what I’m going to do with my life.’ I was out of it, completely.

“In retrospect,” Mohammed says, “perhaps the timing and all of those rejections were all divinely strung together because, were it not for the pandemic, if this book had come out before, I’m not sure it would have been received as it has been received. People were trapped at home and hungry and glued to social media. People are so much more open to these virtual events and meetings and whatever. A small, little independent press like that, they didn’t have any budget for marketing. They couldn’t fly me and I couldn’t fly me all over the place to attend events.”

Mohammed suggests that the timing was right for yet another reason: her next book, slated for publication by HarperCollins in 2023, is a children’s picture book, about steel pan drums. “If it weren’t for the pandemic,” she said, “I would have never sat down to write a picture book.”

Mohammed says this. But she is driven by something much more tangible: the need to show her daughter, who was born in the mid 2010s, something that is uniquely Trinidadian. “What I really appreciate when [I’m reading] is I see myself on the page, I see something I can identify with. And I was buying all these books for my daughter with brown children and, you know, Black, brown, yellow, red, whatever kids. But my daughter isn’t any of those things, right? She never will be just like me. She can’t tick the box that says ‘you’re this thing or that thing.’ Her father is Latino. She doesn’t know what she is. But she does know that she’s Trini. That’s the one thing she does know that she is. And so I wrote that book trying to show her that this is something very Trinidadian. Trinidad gave the world this musical instrument. It’s one of the few actually invented in the 20th century. And it came from somebody taking what they had available and turning it into art. It’s an indigenous musical instrument. And I really wanted her to know that and be proud of that.”

I ask Mohammed about one more thing that’s been on my mind since I read Pleasantview: The book’s population is mostly poor, or lower-class. Does she, as an upper-class Trinidadian, feel any pressure to not write that point of view?

“I’m glad you’re asking the question and that you’re asking it openly, because there’s some things that are uniquely American. And I feel like that’s a problem that tends to be a uniquely American problem. Americans are really good at labeling things, and a label to me is like a container, a discrete container for something. And not everything can be poured neatly into those labels. And so, like in the Caribbean, Trinidad – I don’t want to speak for the entire Caribbean because that also is a myth that the Caribbean is a monolith and it isn’t. Every single Caribbean island is different and certain groups of islands they are different depending and their very the historical reasons that go back to slavery and Trinidad. I can speak with a lot of certainty about being a Trinidadian and also being a student of history.” (Mohammed’s great grandmother and great grandfather were brought over from India to work on a British cocoa plantation.) “The thing about it is, I grew up not wealthy. I know what that is like. I just talked to my grandparents, my aunts, my mother. I know what that is like.

“Because of education and social mobility, my present life may not be that. And I may live among people who don’t know that. But I knew it. I grew up in a very Indian home. But I could never be Indian enough because of that that bit of Black. [Editor’s note: Mohammed is bi-racial.] So I always saw myself as Black. But Black people didn’t see me as Black. I wasn’t Black enough and I wasn’t Indian enough. And, so it has allowed me to slide socially wherever I can. And also it has allowed me to sort of observe people in the wild. So sometimes I would be seated in a group of Indian people and they’ll feel comfortable to say certain things around me that they wouldn’t say around somebody who was not Indian. Similarly with Black people, they feel comfortable. So I get insight into certain things. I’m pretty comfortable that everything I’ve written in Pleasantview comes from firsthand experience, observed or lived.”

Mohammed’s comments remind me that, no matter how much I’ve learned and read about other cultures so far, I still carry the baggage of an American perspective, where things fit neatly into labels and genres, where we sometimes fail to see the long history that gives a writer perspective, just because it hasn’t crossed our minds to imagine what such a perspective might endow a writer with. But talking with her also reminds me that there is are so many more lives to be learned.