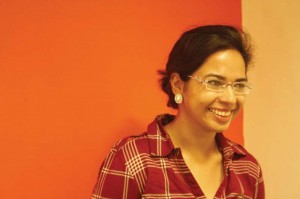 How do you make ancient myths relevant to the modern reader?

Indian author Samhita Arni has spent most of her writing career figuring this out. The 28-year-old writer has written three books about mythology, but her updated versions of the myths are subversive and often provocative. She began writing her first book, The Mahabharata: A Child’s View, about the Hindu religious epic when she was barely 8; it was published when she was 12. Her second book, the graphic novel Sita’s Ramayana, written with artist Moyna Chitrakar and featured on these pages, was a quasi-feminist retelling of another Hindu epic, the Ramayana. It rose to No. 7 on The New York Times graphic novels bestseller list.

Her latest offering, The Missing Queen, retells the Ramayana as an intricate noirish thriller. The hero – the Hindu god Ram – is cast as a slippery politician, his brother Lakshman a paunchy bureaucrat. The classic battle between good and evil is retold, but it isn’t quite what it seems, and the reader is left wondering who is good and who isn’t. I spoke to Arni at her home in Bangalore, India, where she was taking a break from working as a TV scriptwriter for a cop show in Kabul, Afghanistan.

You were a precocious child; you began writing at the age of 8. Did you always want to be a writer?

No, not really. I began writing my first book when I was living in Pakistan as a child, where my father worked with the Indian foreign service. Relations between India and Pakistan were at their worst then. I realized how similar the Mahabharata was to my own life as an Indian in Pakistan: close cousins at war, bitter rivalry, a cataclysmic battle. My sense of being an outsider was mirrored by so many characters in the book. It became almost therapeutic for me to write my own version.

In some ways, it was tough going on my first book tour through Europe when I was barely in my teens. People kept asking me, “Did your mother write the book?’ It was only a few years ago that I finally felt like a writer.

Your three books are all about mythology. What fascinates you about the subject?

I think myths are the purest form of storytelling. We – and I – keep returning to the myths because they speak to us. We live in a time of war, but the epics, with their flawed characters, remind us that life is not black or white. And besides, we are all looking for heroes and heroism, aren’t we?

Your writing style is very simple, in contrast to so many Indian writers who use magic realism, puns, wordplay….Is that deliberate?

Yes. It’s deceptively hard to keep it that simple; each chapter of my latest novel went through nine or 10 drafts. I believe it is important for writers to grab their audiences. I think there are many Indian writers who use beautiful language, but I can’t finish their books. For my latest book, I wanted it to be a proper thriller, so I had to keep the action moving and make it as visual as possible. I definitely get the sense sometimes that I would have more success if I were “literary” or if I had a “stream of consciousness” style, but I am not that kind of writer.

Many religious Indians think the epics should not be altered in any way. In 2011, Delhi University banned an essay on unconventional versions of the Ramayana, following violent protests by right-wing groups. Since then, writers have been arrested at the Jaipur Lit Fest for reading from The Satanic Verses, and Salman Rushdie’s appearances have prompted angry protests. Does this type of artistic censorship make you warier, when writing?

Yes, certainly. In this climate, I am definitely nervous about offending people’s religious sensibilities. Perhaps that’s cowardly of me, but I don’t want to be another Rushdie, or a writer in exile. I had to be careful not to go too far when writing this latest book, and stay respectful of the epic.

Having said that, I think there is great power in unanswered questions. I wanted to ask questions, but I also wanted the readers to answer them. So, for instance, is the whole invasion of the island of Lanka – the pivot on which the whole of the Ramayana turns – nothing more than a Machiavellian plot? It’s up to the reader to figure it out. The Last Days of Socrates is one of my favorite books, and I was aiming at a sort of Socratic style of writing.

The Missing Queen has all kinds of modern devices – skyscrapers, TV cameras, weapons, terrorists. How did you incorporate them into an ancient storyline without jarring the reader?

I was inspired by the fact that the original epics do mention seemingly modern inventions – flying chariots, weapons, mercenary armies – which could just as easily be airplanes, Molotov cocktails or terrorists. I also took inspiration from everyday life. For instance, sensational TV newscasters are big in India. So I decided to make the original narrator of the Ramayana, Valmiki, into a modern-day TV journalist, because I saw so many parallels.

In most Indian myths, dialogue is often very flowery or archaic. How did you adapt this to make it more modern?

You think of the epics as being written in very archaic language, but if you read it in the original Sanskrit or Greek, it is visceral. Somehow this vibrancy, this rawness is often lost in English translations. I have tried to stay true to the structure of my books. In my second book, Sita’s Ramayana, I had the challenge of adapting traditional illustrations to a very modern art form: the graphic novel. I definitely wanted the illustrations to come first. I worked really hard on making the dialogue as simple as possible, so that it filled in the gaps, but didn’t overshadow the illustrations.

When writing The Missing Queen, I wanted it to have a noirish feel, like a 1920s prohibition-era novel. I used a lot of American expressions like “skip this joint” and “keep your trap shut,” which might have been out of place in a different novel, but fit well here, or so I think.

What tips would you give to a writer, or rewriter, of mythology?

Pay attention to structure, meter and form. The way the epics are structured, be they Indian or Greek, may seem effortless, but they are deliberate. For instance, in nearly every epic, the hero is faced with a call to action, which he usually ignores. I used this device to begin The Missing Queen. I also put in a lot of research. I must have spent three or four years on The Missing Queen reading different versions, looking up academic studies, listening to folksongs and plays.

You are only 28, and you have three books behind you. What advice do you have for young writers?

Don’t write to be published; write because you have a story that needs to be told. This may be a cliché, but it’s true. The Missing Queen took almost five years to be published, and there were times when I thought it would never be. But that made me realize that it just wasn’t good enough, and needed to be reworked. All that work helped me decide that I really wanted to be a writer, even if my books didn’t make it into print. I wrote this book for myself and no one else.

Kavitha Rao is a journalist in Bangalore, India. Her work has appeared in The Guardian, New York Times, South China Morning Post and Atlantic.com.

FROM The Missing Queen by Samhita Arni

Television is all the rage in Ayodhya. Hundreds of us, print journalists, have scuttled from our desks, swapping typewriters for cameras and microphones, drawn by the irresistible lure of television. Television is the mouthpiece of the New Ayodhya. Ayodhya is booming, Ayodhya is shining. Images flash on screens in every household, speaking of progress and development. Ayodhya is poised to take the world by storm. Ram has become an intimate presence in our living rooms. His face, magnified a thousand times, blazes on our shiny new TVs. His voice booms through our newly constructed houses, echoing across our polished floors and gleaming walls, promising prosperity and enlightenment.

It is raining today. Dozens of colourful plastic umbrellas unfurl, protesting the early onslaught of the monsoon. Journalists, out in full force, thoroughly drenched, swarm around the open ground, where a giant screen has been put up for our benefit. Ram wanted to keep Kaikeyi’s funeral private but arranged access for all the television channels to beam live images of the cremation into every Ayodhyan home. We watch the cremation, in the rain, dripping and wet, waiting for the promised press conference.

The cameras focus on Ram, lovingly, as he and Bharat kneel to light Kaikeyi’s pyre. Dressed in his trademark white kurta, after all these years he is still handsome. But the close-ups betray his age, magnifying the faint streaks of grey in his hair, the crow’s feet at the corner of his eyes.

“Isn’t it amazing,” says a foreign journalist, as we jostle our way through wet, excited hordes of journalists at the press conference later, “how he makes the simplest clothes look grand? Sumptuous, even, beside all the other leaders and politicians, decked in their expensive suits and brocade saris! Spotless, starched, crease-free white means power in this country! It speaks of a legion of servants whose sole purpose is to wash clothes, bleach and iron them. It means money.”

I look at my colleague, surprised at his outburst that stinks of cynicism. He catches my eye, and laughs. “It’s all a show,” he says sarcastically. “A show for us.”

He is right. Ram comes out, and the crowd cheers. We watch him mourn for a stepmother who had done all she could do to destroy him. Yet his grief is sincere. No one could ever accuse Ram of dishonesty.

But something irks me.

I think back, past many years, to that meeting with Kaikeyi. She had been right. After reading my first draft of her interview, my editor had guffawed. “I can’t publish this,” he told me, tossing the typed sheets back at me. “It might be the truth, but it’s not something people want to read. It brings up questions and memories that people don’t want to confront. Our newspaper runs courtesy of the regime, we don’t want to rock that.”

Young and idealistic, I felt shattered.

This excerpt from The Missing Queen by Samhita Arni appears with permission from Penguin Books India/Viking | Rs. 399.