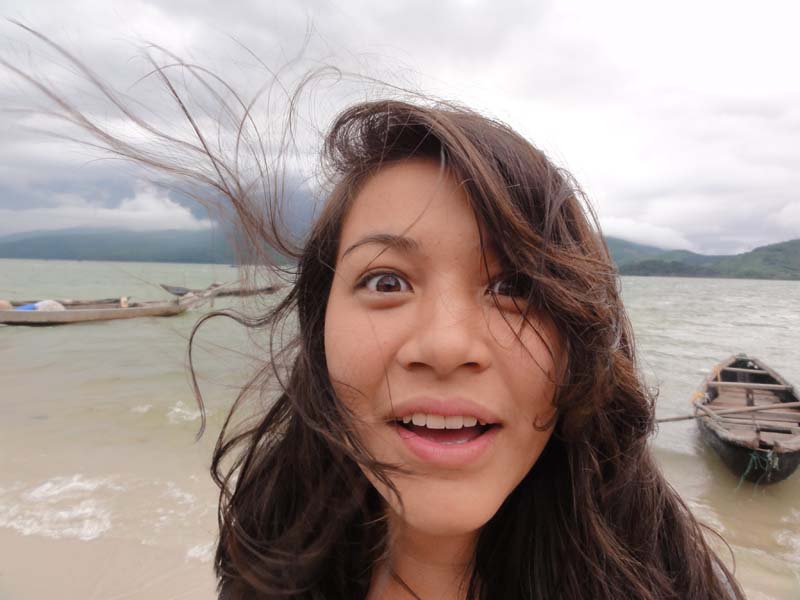 Book publishers, agents and, yes, we admit it, magazines are always on the hunt for the next precocious young writer. With Violet Kupersmith, we have stumbled upon a  blue-chipper. A 25-year-old Mount Holyoke College grad, Kupersmith published her first collection of short stories just after completing a post-college Fulbright Fellowship in Vietnam.

Kupersmith isn’t one of those young writers who has dreamed of publication since she read her first Eric Carle board book. When she started at Mount Holyoke, she was fully compliant with her parents’ vision that she would emerge from higher education with an M.D., but after giving in to the pull of fiction, she planned to enter an MFA program before looking for publishing opportunities. When Mount Holyoke writing professor and novelist Valerie Martin happened to show Kupersmith’s thesis to an agent, the story collection The Frangipani Hotel began its journey into the hands of the literary public, dragging Kupersmith into the world of writing.

The storytelling bug bit this daughter of an American librarian and a Vietnamese refugee around the age of 6 or 7. “I was really scared to go to the bathroom alone,” she explains, “so I always lured my little brother to come with me. I would have to tell him stories to keep him occupied because otherwise he’d be like ‘Ew no, no way.’ And so I did this weird child Scheherazade thing where I kept concocting these weird stories out of desperation, because I was too scared to go to the bathroom alone.”

Kupersmith has been honing her inner storyteller ever since.

The stories in The Frangipani Hotel, many of which Kupersmith wrote at Mount Holyoke, are not what one might expect to encounter in the typical undergrad short story workshop. Martin took notice of this budding author when Kupersmith submitted her first assignment.

“Violet’s first story was about a young man who works at a gas station in Texas, and he winds up being followed by something that seems a lot like a ghost,” says Martin. “At first I didn’t know anything about Violet. I didn’t know she was Vietnamese, and this story had nothing to do with Vietnam, so I had no notion of where all this was coming from, this fantastic world that seemed to be both Texas and otherworldly. That was very unusual. I sat up and paid attention.”

Ghosts appear in each of the stories in Kupersmith’s rookie release. She credits her Vietnamese grandmother with passing on the obsession.

“My grandmother talked to dead people back in Vietnam,” she says. “I always had her stories, and I read a lot of strange things growing up, which fed my imagination. I was given more Roald Dahl as a child than is necessarily healthy, I think.”

Although much of her inspiration comes from Vietnamese folk tales relayed by her grandmother, Kupersmith says her stories have moved beyond fairy tale retellings. “I find that the old narratives aren’t very useful,” she says. “It’s like a very old bicycle. You need to take it apart and take bits of it. I take the idea of the spirits and put that into a different contemporary world that I’ve created. My grandmother’s stories themselves aren’t that exciting or scary. They’re weird and they’re short. But when you take apart the elements and divide them up and insert them into different situations, that’s when something more exciting happens.”

Kupersmith visited Vietnam for the first time with her family when she was 18 and subsequently spent the summer before her senior year at Mount Holyoke in Hanoi. That summer, she stayed in a hotel very similar to the one described in the collection’s title story. These visits and her Fulbright scholarship in 2011 allowed her to absorb the world that inspires her work, helping her to create vivid settings and characters.

“The colors here are different,” she says from her apartment in Vietnam.

The language, which she speaks slightly, has found its way into Kupersmith’s prose. “Especially with characters,” she admits. “The pronoun system is different. There’s no ‘I’ and ‘you’; it’s not that easy. You’re always defined by who you’re speaking to. I think that’s crept its way into how I write and deal with characters. I’m more aware of the relationships between them.”

In the past few years as her Vietnamese has improved, Kupersmith has also been able to communicate more easily with her grandmother. “I realized for the first time, just a short while ago, that she has such a potty mouth,” says the writer. “I had no idea all along that she was just cursing like a Vietnamese sailor.”

Martin, who is credited in The Frangipani Hotel’s acknowledgments, says Kupersmith was always way ahead of her peers, even though the short story workshop in which she submitted the piece about the boy working at a gas station in Texas was one of the best Martin has ever had.

“She has a beautiful, lucid style,” says Martin. “She’s very good at dialogue, which a lot of young students are not, and very good at creating an atmosphere, especially an atmosphere of suspense. That seems to come very naturally to her. She’s also a wonderful critical writer, which probably most people don’t know and won’t know.”

Kupersmith, however, singles out dialogue as the hardest part of writing for her. She relies on lots of eavesdropping to help her create realistic and interesting conversations between characters.

“I know she finds it difficult to write,” says Martin of Kupersmith’s self-proclaimed weakness, “but she’s got a very good ear.”

The young writer credits the community of writers she had at Mount Holyoke for teaching her the importance of sharing her work with others.

“I get attached to things, so that’s why it’s so important to have more eyes on the story, so they can convince you that the story deserves to reach its full potential. Sometimes the writer smothers it a little. We get a little helicopter parent-y.”

Workshops also highlighted one of the most important short-story writing skills: knowing when to end it. “But not trying to wrap it up too neatly,” she says, “learning to feel the edges of the story and knowing when you have just enough without going overboard. You can always tell when there’s a story that the writer wants to be a novel.”

Now living a nomadic life between Vietnam, her hometown in Pennsylvania and wherever she happens to land a writing fellowship, Kupersmith writes at night “when the shadowy parts of the imagination are most fertile” and spends a lot of time in cemeteries, “communing with the spirits” and soaking up the spooky atmosphere for her forthcoming novel, which will, of course, still involve ghosts.

“It’s a grapple,” she says of her work in progress. “It’s much more difficult than I anticipated, which sounds silly, but writing a novel is really about moving a different kind of muscle in your brain than writing a story.”

When she first embarked on the new project, she worried that she wouldn’t have the attention span for novel writing. “But I’m surprised at how invested I am in the lives of the small group of people that the novel contains.”

Despite all that time spent channeling voices in cemeteries and penning stories that are legitimately unsettling and creepy, Kupersmith has a youthful energy that is apparent even over the phone.

“That would be dreadful if I was a morose, creeping human in robes,” she says with a giggle. “I’m fairly bubbly, but I have to balance out the darkness in my soul.”

The young rising star counts herself lucky to have her career start so early. This way, she has plenty of time to experiment with writing styles and themes.

“I don’t think I’ll write ghost stories forever,” she says. “I’m thinking of transitioning slowly, maybe from ghost stories to dark mysteries. I mean I’m not going to write children’s books immediately after this. I love what I’m doing now, and I’m never going to write anything completely normal, I’m fairly sure.”

And, of course, we’d never want her to.

Megan Kaplon is a graduate of Emerson College in Boston and an editorial assistant at The Writer.

Excerpt from the short story “Little Brother” in The Frangipani Hotel 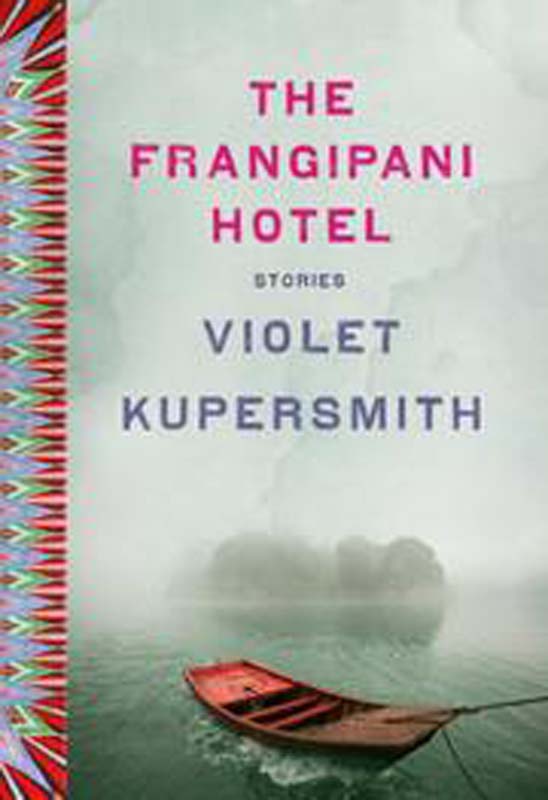 “Older Brother, I know everything else about you, but you still have not told me your name.”

I remembered the words of the nurse again and hesitated. Lucky I did, for just then a motorbike drove by and its headlights illuminated the two of us. And in that sudden instant of light I saw that something about Minh had changed. When we left Saigon, the boy’s cheeks had been sunken, his eyes hollow, his skin gray and drooping. But somehow, miraculously, the face was now full and fresh. His eyes had become bright and alert; the dark rings beneath them had vanished. He looked like an entirely different person. I jerked away from him.

“Is something wrong, Older Brother?”

Everything was wrong. His face, my body, whatever was happening to us. I tried to stand but my legs were still not my own and my head swam. I started crawling away from Minh on my hand and knees instead, and for the first time, he laughed.

He let me make it a couple yards before he walked carefully over, feeling for dry spots before putting a foot down. He kicked me onto my back with one newspaper-clad foot. Even in the dark I could tell that he had grown larger, his chest and shoulders broad.

“Now will you tell me your name or do I need to search the truck for your license and find it that way?”

The soft spluttering of an engine in the darkness: Another motorbike was approaching. This time I was ready. I was staring up at the shadow where I knew Minh’s face was when the light came. When I saw it, I did not scream. I would tell you if I had – I am not ashamed – but I could not make a sound.

It was my face. He had my face. The features of it – my lips, my nose, the ridge of my forehead – were lumpier, fleshier, but I knew with sickening certainty that the face I was looking up at was a replica of my own.

“How to Date a Brown Girl (Black Girl, White Girl, or Halfie)”
by Junot Diaz, for an unusual, tightly controlled narrative perspective

“The Alien Corn”
by W. Somerset Maugham, for a perfect ending