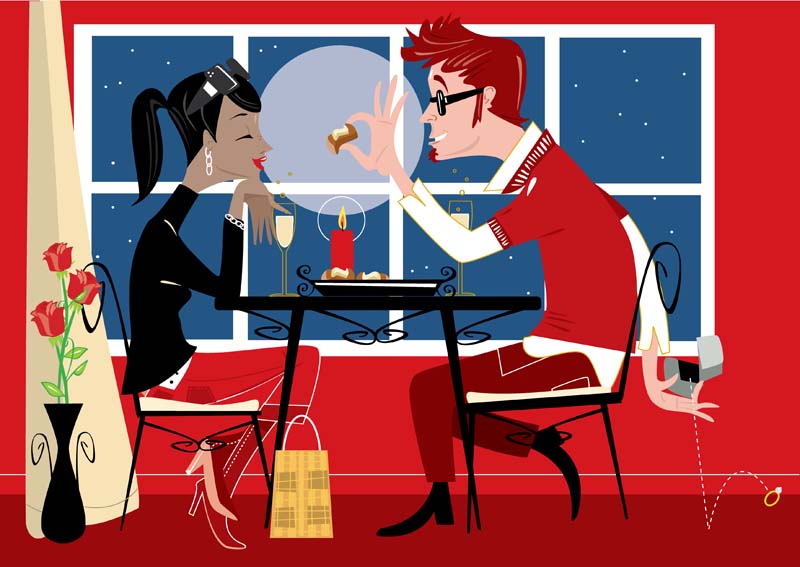 I was in my 50s when I began dating online, but I quickly learned that the “older singles sites” did not represent me. Silver-haired people, very elegant, walked on beaches, wrinkled hands clasped. So sweet, but I was not there yet. Other sites seemed too young and fiercely hip. The gauge-eared, eyebrow-pierced, leather-clad set strummed electric guitars and showed pictures of bungee jumping and riding Harleys. In fact, everyone – in all ages, across social class, and on every site – seemed to own Harleys. While I had been out of the dating world, there had been a great profusion of motorcycles riders. Now they were looking for love. Where did I fit into all this?

Each dating website came with its own vernacular, codes and tricks. On this one, you could give or receive a “rose”; on that one, you could make someone a “favorite.” I struggled to learn the ropes and met a lot of men: men who were funny, men who were uber-serious, men who bragged (“writing from the deck of my sloop where I am sipping a ginger lemon drop martini”), men who professed humble qualities (“I don’t have much, but my heart is huge”). I met a man who raised llamas, one who had a secret crush on Sarah Palin and one who was writing a book about the approaching apocalypse.

After a while, I realized I was enjoying myself in an unexpected way. It wasn’t the men I was enjoying. It was their stories. It was as if I had fallen into a rich broth of narrative. And I could not resist: I began to write down the stories.

Before I knew it, pieces of this one and pieces of that one were being stitched into characters, and a little bit of this one’s life and a bit of that one’s were stitched into plots, and then one day my imagination got involved and I wrote about a woman who was turning invisible and a man who had an illness that made him fall in love too deeply. I wrote about a man and a woman who discovered love through online postings on a bird-watching website. Another day, I wrote about a woman who could remove her heart from her chest and talk to it. I wrote about a deer and a polar bear that fall in love online but keep misunderstanding one another’s “time zones, interspecies snafus.” These stories were cobbled together from my experiences with the online dating world.

I was deep into my writerly explorations of Match.com, JDate, PlentyOfFish and OkCupid when I unexpectedly fell in love – and began to write that story, too.

Then it hit me: Was I was looking for love or stories? Was I a poacher in the land of love or a love-struck woman in a fictional landscape? I really could no longer tell. I loved a few of those men and one of them very, very much, but I also felt guilty because I had loved their stories just as much. I felt I was cheating on the men, stealing from them when I took snippets of their words for my work.

One man told me he had once ridden on the back of a whale. Another told me he had killed a man one night outside a brothel in Europe. Another confessed he had been pining away for Ann Coulter. One lived on a boat. One lived in an RV. One man, age 53, lived with his mother. Others were deep in the desert, studying the mating rituals of scorpions, addicted to salt or in love with a sister. Sacred and seriously personal stories, often in the form of confessionals, came my way, but as a potential mate, not as a writer. I was like one of those anthropologists who go undercover in a mental hospital to get the stories inside. I was an anthropologist of love.

My art had been imitating my life, and now my life was imitating my art.  Where would it end? I had been a memoirist and a poet and a journalist, but I had never thought of myself as a fiction writer. I called a friend in the writing field. “I think I might have written a book of short stories about love,” I said.

A year later, an editor read the stories and wanted to publish them, but I felt confused. Had I appropriated love stories instead of love?

In the end, I found myself worried only about one man whom I had loved quite deeply. In my stories about him, I suspected I may have crossed a line. I had to tell him. It was the right thing to do, the ethical thing.

I brought all the stories to him in a folder labeled: “final versions.” I was shaking.

“Hey,” I said. “I have to tell you about something I did. Sit down.” And I read the stories aloud.

“You stole stories from me,” he said.

“I did,” I confessed. There was a long pause. A lawnmower somewhere outside buzzed.

I felt my chest tighten, as if a corset were tightening around me. How could I give my stories back?

Reader, I took his stories. I took them and ran with them.

Elizabeth Cohen is an assistant professor of English at Plattsburgh State University-SUNY and author of The Hypothetical Girl, a collection of stories. Originally Published January 1, 2014