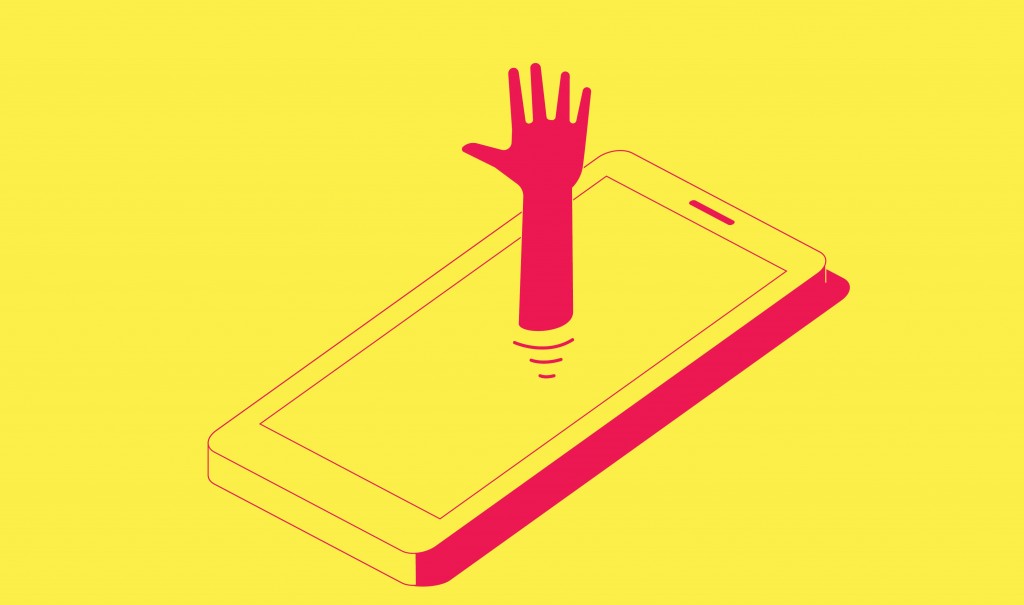 A few weeks after I log off social media, Truth arrives at our plastic-covered kitchen table in the form of a glue gun, accompanied by the smell of heated steel and melted things, and sounding like a child’s pretend-world monologue. Alida, the baby, has selflessly decided to take a long nap, leaving me and Nora, our 3-year-old, with enough time for serious crafting. This morning it’s sculpture time, digging into an old bucket of spiral nails and hot-gluing them together to form a tiny framed building and a fearsome, upright reptile.

After about an hour and a half, which includes two pee-breaks for Nora and snacks for both of us, the lizard is almost done. Just a few carpet tacks to glue in place as teeth and claws. I feel a cool little hand on my forearm and hear a 3-year-old telling her daddy that she’s having fun. And that she loves him.

I logged off early in the new year. I didn’t delete my accounts, but I did remove the Facebook and Twitter apps on my iPhone, got rid of their buttons from my browsing bar, and unselected all the settings that kept my devices perpetually connected to my feeds. I wrote a nice note to my friends and followers, a kind of reassurance that my hiatus wasn’t permanent. This does have value. I’ll be back.

It was important to me that no one see me as a fanatic, one of those people who logs off – and makes sure everyone knows it – before retreating into a self-righteous world of fixie bicycles, waxed beards, and locally sourced hemp footwear. Nor was I hopelessly addicted – what writer Geoffrey W. Cole calls a “diaper-wearing individual working that one lucky slot machine” – and in need of detox. I’ll find that perfect balance.

Late in 2016, I found myself exhausted, physically and emotionally. The U.S. election had fractured many real and virtual relationships, the Steven Galloway scandal in the Canadian literature scene had savaged the rights of everyone involved and caused deep division amongst the rest of us, and a vicious bacterial pneumonia in late summer left me short of breath through December. And, with a baby in the house, sleep was precious and elusive.

Then these words, from a cousin-in-law with whom I’d enjoyed a lively online dynamic, in response to, as I recall, an exchange about the value of socialized medicine, appeared in my Facebook feed:

Two simple words. Directed at me, rather than to me. I sat back from my laptop, perplexed and weary. Until that point, I’d tried to present a nuanced view of the issues that confronted us online. Not perfectly, of course, and from time to time I waved banners that I should have proofread more carefully, but the goal was always to be civil, never personal.

You can download your entire Facebook or Twitter history with a couple of clicks. Seeing an entire social media life laid out so nakedly, from my first awkward post to the last embarrassing thing I said before logging off, is a surreal experience. But valuable, also, if only as a digital reminder about how much time I’ve spent – and, yes, wasted – coughing up pieces of my life to display online.

Given its relatively young age, social media’s ability to act as a force for change is nothing short of a wonder. I joined Facebook on April 1, 2007 at 4:12 pm, as a way to connect with friends and family while I was teaching in Kuwait. Oct. 16, 2010, saw me tweet for the first time. I did join a number of other emerging services between then and now, but Facebook and Twitter are the only two that stuck.

What draws me to both is their words-first approach: you start with an empty text box, type something out, and into the feed it goes. This makes sense to me as a writer. Even as Twitter and Facebook have evolved, adding photos and videos and advertising and the trillion other bits that distract us from the real world, I still prefer the simplest of interactions: Let me share a thought with you. I look forward to your response.

But what do you do when those genuine interactions happen less and less frequently, lost in a tsunami of cut-and-paste drivel and commercially driven content? I’ve been openly critical of the algorithmic approach to socializing for some time – what Andrew Forbes, author of What You Need, calls the “corporate ownership of the human desire to connect” – but I’ve maintained my online presence, mostly to promote my writing (or so I tell myself). Staying connected has become secondary – all those gifs, memes, cat videos, and GoPro shenanigans keep me scrolling past 95 percent of what appears in my feed and on my wall.

Hence the hiatus. A chance to refresh and perhaps reestablish some of the analog habits that have suffered for almost a decade. Reading. Playing. Building. Not to mention writing. And for the most part I’ve not looked back with anything other than satisfaction, because filling that reclaimed time with more active and meaningful activities has been a blessing in every sense of the word.

Yet a few days ago I found myself back in my Twitter and Facebook accounts, posting about winning a short story contest and seeing the resulting story in print. Precisely the kind of good news I’d promised to share. The positive response was encouraging, so I logged in again and again, thanking and liking and posting and sharing as though I’d never been away. Or, in the words of award-winning The Bone Cage author Angie Abdou, I was back to “channel-surfing” my social media feeds.

I felt an immediate distance between my re-immersion in social media with the epiphany I experienced in the moment with my daughter and that glue gun. I’d promised myself I wouldn’t be fanatical about my retreat, but the guilt was still profound, as though I lost something like faith. Ayelet Tsabari and Liz Harmer, two of the wisest writers I know, talk about the worry of losing “presence” in their lives and with their families, and this weighed on me, too.

I felt, as they say, #Allofthefeels.

Back in January, to help Nora develop a sense of external responsibility, we bought her some fish. Guppies. She names and feeds them, I take care of the tank. The learning curve has been steep – we’ve lost a few along the way – but yesterday, the female (Nora called her Victory, a name so perfect it makes me emotional) had babies. Twelve perfect, tiny fry scooting around the tank trying to survive on nothing more than goggly-eyed instinct. This morning, I’m mesmerized by those tiny fish, and oddly proud.

You know where this is headed. The digitally primal urge to snap photos and jump online and share with members of my tribe. Facebook might still be logged on, a few seconds to connect is all I need, this isn’t giving in, it’s just a moment, right?

My iPhone stays on the counter. I call Nora over and help her count the fry. She asks why we need to count and I tell her that sometimes fish will eat their own babies. She thinks that’s pretty weird. I agree. We watch the fish for a while. Nora is rapt, and I become secondary. I spend the next few minutes in this brief digital vacuum, listening to my eldest daughter talk to the fish and herself, creating a world only she can see, jumping between the actual and pretend as effortlessly as breathing.

All #IRL, of course.

—Brent van Staalduinen is an award-winning novelist and short story writer from Hamilton, Ontario, Canada. Find out more at brentvans.com.