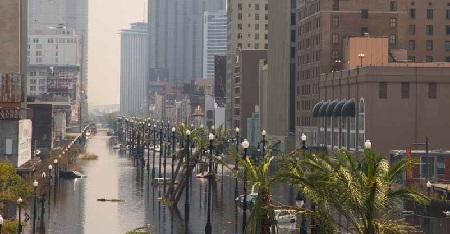 When I set out two years ago to curate an anthology of blog entries written by Hurricane Katrina survivors, I had already been thinking a good deal about digital memory – in particular about how much of our lives we put online, assuming the web will always be there to function as our personal time capsules.

I wasn’t thinking about memory loss – at least not until I discovered I could no longer access much of what I remembered reading online in those post-Katrina months.

It occurred to me much later, after I’d already turned in the manuscript, that part of my motivation for finding out just how much I’d already forgotten in the decade since the storm was because I’ve spent the past few years watching my mother’s memory fade in ways that are both fascinating and devastating.

The one silver lining of my mother’s vascular dementia is that her past grows more vivid with each retelling. The same sad stories about her childhood that she told me over and over again and that always appeared in my mind in muted black and white outlines are now rendered in full Technicolor, the tragic details less depressing for being so spectacular. The cruel old grandmother who dyed all of my 5-year-old mother’s clothes black after her father died? I learned only recently that her name was Leopoldine Langevin and that she had fallen in love with and married a defrocked Catholic priest. Evidently she spent the rest of her life trying to get back in the good graces of the Church, which may explain her strict observance of the formal mourning rituals. Leopoldine forced my mother to wear those black clothes for a full year.

She tells those same stories daily, sometimes hourly, and while it can be exhausting to hear them for the 27th time, I have learned to listen for new details that get plucked at random from her brain’s Lost and Found. Sometimes, these new details are like unmatched gloves, meaningless without context. Other times, they are like giant puzzle pieces that complete a picture.

I wanted this collection of Katrina diaries to be like that found puzzle piece – for my nieces, my students, for anyone who thinks they know the important bullet points about Hurricane Katrina, but who also can’t fathom what it was like – what it felt like – to live through it.

In 2005, the web was still a place of organic connections and presumed permanence, with places to “visit,” not just rabbit holes to fall into. It’s none of those things today. The average web page lasts only about 100 days, on average, before it changes or disappears altogether. There is no original version that gets automatically archived. We’ve only recently started to comprehend the threat that this “web erosion” poses for our future ability to reconstruct our own history. Add to this the fact that 90 percent of the world’s Internet data has been generated in just the last two years, and the early days of the web start to look like the ocean floor beneath a rising sea of ephemera.

I sometimes wonder what it would have been like if Twitter and Facebook had been pervasive during Hurricane Katrina. Certainly, it would have helped if people had been better informed and better connected. But I also think that the kinds of details that were shared on blogs would not have translated well on today’s templated, data-mined and hyper-“liked” web. Not many of Katrina’s stories could have been told in 140 characters or less.

Drilling down to excavate information that might otherwise get forever buried might not seem very important – especially when, unless you already knew what you were looking for, you’d never even know that you were missing anything to begin with.

After the onslaught of “Katrina + 10” coverage recedes, many people on the Gulf Coast are now recovering from Katrina fatigue. But just when you think you know the story inside-out because you’ve heard it a hundred times before, look for that missing puzzle piece that changes the whole picture and maybe helps you understand.

Cynthia Joyce has contributed to regional and national publications, including MSNBC.com, Nola.com and Salon, and teaches journalism at the University of Mississippi. She is the editor of the anthology Please Forward: How Blogging Reconnected New Orleans After Katrina.

Advertisement Writer Priya A. Desai’s family has lived in Los Angeles for generations and was one of the first Indian families to settle there. Her … END_OF_DOCUMENT_TOKEN_TO_BE_REPLACED