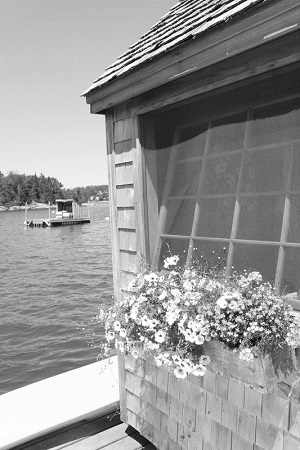 For a time, I rented an old sail loft as a place to write. It sat on rotting pilings near the shore of a tidal river. When I first arrived and slid open the weathered glass doors that faced the harbor, a black cormorant was floating in the briny June mist. Immediately, he seemed fully aware of my presence, his head turning from side to side to catch me in his peripheral vision. The Double-crested Cormorant is black with a greenish purple sheen from the oils that keep his wings from drying, and he is long-necked with an orange throat. No more than a sea crow, I found him exquisitely exotic and gave him the name Jinx.

After two summers writing at the sail loft, I vacated so that the owners could remodel. During my time there, I had been smitten by the tides that washed in beneath its pilings and by the flotsam that remained after the tide receded, entangled with shells and snails and sea glass. Often, I collected these treasures and lined them on the sail loft’s windowsills: a tiny skeleton of a sculpin fish, spotted moon shells, a speckled lady crab shell and spiny sea urchins, each holding the power to emancipate me from my daily routine.

On a piling beneath the sail loft, I witnessed a starfish begin to grow a new arm, and the black seeds of mussels, protected by wings of glossy emerald-colored seaweed, blossom into plump bivalves. I watched the cloudy water of low tide become the cleansing high tide. Through the floor boards, I could see the sea’s rocky bottom beneath eight feet of water and mussels glistening in the mauve of a night sky. Once I sat still on a large shore rock while Jinx floated close enough for me to touch him, although I didn’t.  Instead, I let him hold me in his peripheral vision like a jewel. I tried to think how I might describe him later, but no words seemed worthy. Then, I was reminded of a quote from Henry Beston: “For the animal shall not be measured by man, in a world older and more complete than ours, they move finished and complete, gifted with extensions of the senses we have lost or never attained.”

Leaving the sail loft, I knew that I would miss Jinx, and that I would also miss the buoyant briny air. Sweeping my skin in the early mornings, it felt like a thousand tiny stars landing and then turning liquid, creating the desire in me to breathe deeply, convincing me of the redemptive qualities of nature. Being present with nature had regulated my heartbeat, eased my anxieties, settled me, and it had brought back that exalted feeling I had as a child when perusing the streams and creeks and rivers, the estuaries of my youth. It both quieted and invigorated my writing.

I began to search real estate listings for a similar place. I wanted it to be weathered and on the water, preferably a tidal shore. What seemed like an endless search revealed nothing that I could afford, but the following winter, with a few rough sketches, and a generous grant from the Canada Council for my writing, I built a 10-by-12 fishing shack replica on a 16-by-20 foot float and moored it in a cove not far from the sail loft. The shingled shack is built sturdy for wind, and turns all day on its mooring like a sailboat with the tides.

Inside the shack is a small loft that can be reached by a wooden ladder. It serves as storage and a hideaway for naps in windy weather. There is a director’s chair that sat on my children’s great grandfather’s cruiser, which sailed Massachusetts Bay in the 1930s. The chair is beneath an abstract and torn oil painting that I found in a local antique shop. Its colors might appear in a pirate’s chest of ancient booty, emerald and garnet and citrine, so vibrant that the viewer cannot help but be drawn to the tiny house teetering on a high island. There is also a pine lift-top desk from my mother’s childhood home. It sits in front of a multi-paned window and is full of sharpened pencils and paper. There is a creek chair for sitting outside, a life ring, a towel, a sun hat and a butterfly net for catching treasures that float with the tide. There are binoculars, a one-burner gas stove, an old-fashioned coffee percolator and two ship gaslights for when I stay after dark. On a beam over the door are three tattered and highlighted  paperbacks: The Outermost House by Beston, The Lost Salt Gift of Blood by Alistair McLeod and Drinking the Rain by Alix Kates Shulman. 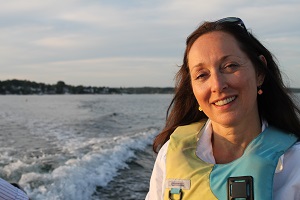 To describe the color of the cove water circling the float on a brightly lit day would be to lessen it. I will only say that the water seems lit as if a second sun is beaming up from the bottom of the sea. On nearby islands, boulders chiseled by the tides encompass the float like a fortress of grandfathers, their faces cracked and porous, wearing a crown of dense and elegant evergreens that emit a fresh spruce scent. When the tide washes out and the boulders dry in the sun, they will turn the coral color of Prince Edward Island beaches. A commanding osprey’s nest sits in a pine tree on one island point, and the mother often fishes nearby, her swoop as broad as any eagle’s. Wet-headed seals lift from beneath the water, begging to be spotted, and an occasional porpoise makes a playful ripple, each breath echoed from its blowhole like a message from God.

Here on the float just as in the sail loft, the tides have given my writing life a different rhythm. They dictate when it is best to swim or witness or write. Here, I’ve learned that it is not the sail loft or shack that inspires me, but my access to nature.­ I have learned that if I am not aligned with nature then I am somehow not aligned with myself. In other words, nature helps me rediscover myself and by doing so, frees my imagination. Most days, it is hours before I settle to write. First I must breathe in the liquid briny air and watch and listen. I must be held in a world older and more complete than mine. If I am lucky, I will hear the breathing of a porpoise or better yet, be held for a moment in the sight line of a cormorant.­

—Deborah Joy Corey grew up in Canada. She has written essays, short stories and two novels, Losing Eddie and The Skating Pond.